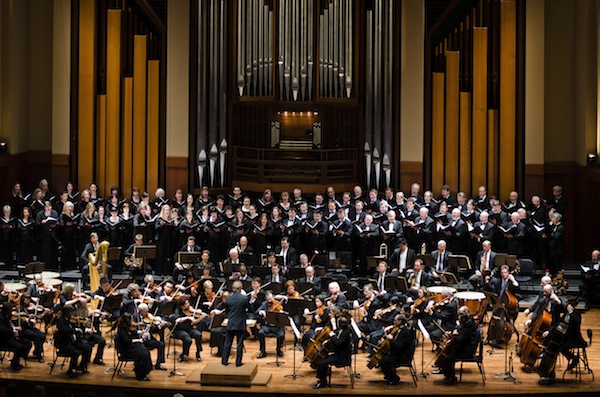 On Thursday night at Benaroya Hall in front of a large audience, the Seattle Symphony played Verdi’s Requiem, the first of three performances. A couple of years ago, music director Ludovic Morlot had asked Seattle Opera’s general director, Speight Jenkins, to choose his favorite concert work and the four soloists to perform in it. The occasion was to be the Symphony’s tribute to Jenkins, who retires at the end of this season, and the Requiem was his choice of work.

The evening opened with a gracious introduction by Leslie Jackson Chihuly, chair of the orchestra’s Board of Directors, who commented that Seattle is an artistically richer city because of Jenkins’ contributions over the past 30 years. And then began a noteworthy performance of the Requiem.

If ever there was an operatic concert work, this is it. Verdi poured his heart into it, his tribute to two men who died, the composer Rossini, and the writer and statesman Alessandro Manzoni. Opera was Verdi’s métier, so it was natural he would use his inclinations to and talents for that form in this work. Morlot, ably backed by the orchestra, the Seattle Symphony Chorale and the soloists, brought out all its drama with thrilling emphases, sudden ends, lyrical soft passages.

It began with the cellos alone, the sound so soft it crept on the ear, gradually increasing with the violins and voices, also soft, but the start of the second and longest section of the mass, the “Dies Irae” descended on the audience with a huge onslaught of brass, percussion and chorus truly representing a day of wrath, and the Benaroya floor trembled under my feet.

Morlot husbanded those episodes at full blast during the work, making each the more effective. The chorus, trained by the Symphony’s associate conductor for choral activities, Joseph Crnko, sang at full volume without ever sounding shrieky, and quietly without sounding breathy. Verdi’s treatment at the beginning of the “Sanctus” is almost in the style of the big oratorical choruses of Handel or Bach, and in it the chorus shone, with clear words and clear harmonies.

Just as Verdi gives prominence to the cellos in the Requiem, so he also gives prominence to the mezzo-soprano role. Tamara Mumford sang with feeling in her glorious voice, which had strong low notes as well as a beautiful higher range. Soprano Joyce El-Khoury’s dramatic delivery had me on the edge of my seat for her singing of the “Libera Me,” in which not just her beautiful voice but her whole body gave meaning to the words. The two singers’ voices complemented each other well in a good pairing, and with them the rich, velvety bass of Jordan Bisch. However, when singing at highest volume, tenor Rene Barbera’s quintessential Italian tenor quality did not mesh in timbre with the other three, though less loudly his expressive singing fit in easily. All four, without straining, were able to rise above the full orchestra and chorus playing at top dynamic, the whole being a thrilling experience and in Morlot’s hands, a deeply moving and musical one.

The words of the Requiem were printed with translation in the program notes, but unfortunately they were too small to follow along in lowered lighting without lifting them close to the nose. Particularly in the “Dies Irae,” it would have been helpful to have the print bigger.