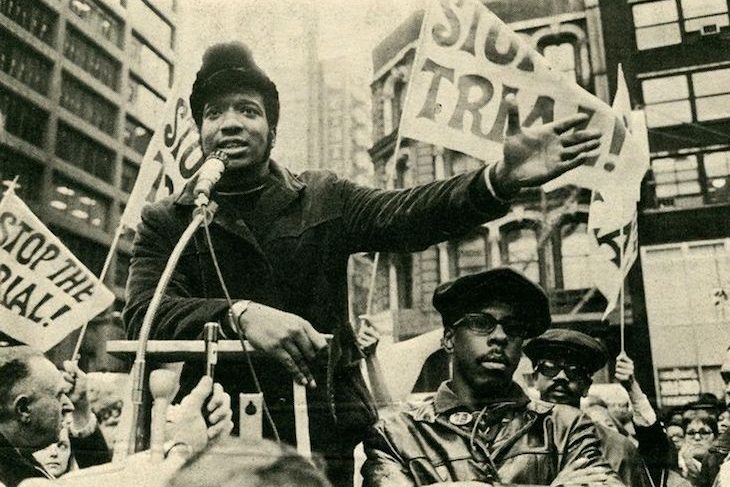 Fred Hampton speaks at a Chicago Black Panther Rally in 1969

On Monday, Feb. 19 at Grand Illusion Cinema, the Seattle chapter of the Democratic Socialists of America will screen The Murder of Fred Hampton, a 1971 documentary about the Black Panther leader who was gunned down by the police in 1969.

In his 2012 memoir My People Are Rising, former Seattle Black Panther Party chair Aaron Dixon described Hampton as “the brightest star on the horizon, the next great Black leader in the United States.” Surviving archival footage of Hampton substantiates Dixon’s praise: Hampton’s torrential speechmaking speeds through Maoist aphorisms and organizer axioms, all of them wrapped in a down-to-earth delivery that strikes the ear like Martin Luther King Jr.’s baritone accelerated to 78 RPM. When Hampton was killed, cameras panned over his bloodstained bed, capturing the cover of saxophonist Eric Dolphy’s 1964 record Out To Lunch. But jazz was jazz. When Hampton spoke, he sounded more like a godfather of rap.

The music didn’t last. From 1956 until 1971, a J. Edgar Hoover program called COINTELPRO was a brutal crackdown on Black radicalism that eventually claimed the lives of Dr. King, Malcolm X and Fred Hampton, among others. Measure by measure, The Murder of Fred Hampton resurrects the rise and crucifixion of the movie’s titular prophet of socialism. The film details how an FBI informant infiltrated the Panthers, supplied Chicago law enforcement with floor plans of Hampton’s apartment, then spiked Hampton’s beverage with sedatives that rendered him unable to resist as police fired two bullets into his head at point-blank range. The tragic tale casts a daunting shadow on the efforts of activists in the present.

For Seattle DSA co-chair Keaton Slansky, screening The Murder of Fred Hampton is part of an attempt to elevate those most disadvantaged by capitalism—the same populations the Panthers represented. “February and March are respectively Black History Month and Women’s History Month, and intersectionality is a standard we need to hold ourselves to as socialists,” Slansky says via phone, referencing scholar Kimberlé Crenshaw’s theory of overlapping race, gender and class oppressions under capitalism. “For our film series, we’re literally projecting our values.”

The Seattle DSA recently elected a leadership council that is majority womxn and people of color. (I was part of that election, and currently serve as a member of the group’s Internal Organizing Committee.) Slansky hopes to make coalition-forming and relationship-building with the rest of Seattle’s Left part of his focus as chapter co-chair. Next month, the Seattle DSA Education Committee will screen Live Nude Girls Unite! (2000), a documentary about unionizing sex workers in New York City. This month, it draws inspiration from the Panthers.

Arising as they did from the embers of New Deal liberalism’s flameout in the 1960s, the Black Panthers anticipated the neoliberal rollbacks to social services that define the socioeconomic reality of Millennials like Slansky. In cities across the country, Panthers offered what they called “Survival Programs” to those left out of the self-congratulatory progressive consensus of post-WWII America: free shoes, free legal aid, free schooling, free housing and free breakfast to vulnerable residents of America’s inner-cities.

Decades before the rise of the nonprofit sector and a full 50 years before DSA’s national “Medicare For All” campaign, the Panthers pioneered sickle cell anemia research in the United States. As detailed in an AJ+ video released last weekend, they were among the earliest American adopters of acupuncture (after learning about the technique as delegates to communist China) and opened dozens of community medical clinics, including the facility that eventually became Seattle’s own Carolyn Downs Family Medical Center. Hoover rewarded the Panthers for their activism by declaring them “the number one threat to the internal security of the United States” in 1969.

After the COINTELPRO crackdown, the Black Panther Party finally dissolved in 1982—the same year DSA formed. It’s illuminating to think of the two groups in relation to one another and to compare their anti-capitalist tactics in a time like today, when it’s rare for politics to question market-driven solutions to public problems.

Socialists though they are, the Panthers and DSA both recognized the importance of spectacle to the image-hungry social factory of capitalism. The berets and sunglasses of the former find an echo in the flannel and rose emojis of the latter. As menacing images of armed Black men beamed into the televisions of middle America in the late 1960s, the Panthers made political substance out of style. Activist Angela Davis and congressman Bobby Rush—the only politician to ever defeat Barack Obama in an election—are perhaps the most durable personifications of Panther politics, with careers spanning six long decades of dedicated organizing. By contrast, DSA only started seriously running candidates of its own in 2017, with Seattle member Jon Grant garnering more votes than any DSA candidate in history in his unsuccessful bid for Position 8 on Seattle’s city council.

The reasonable radicalism of the Panther program forced the federal government’s hand. President Nixon started nationwide free breakfast programs and requested $6 million from Congress to fight sickle cell anemia. These legislative appropriations had a way of sating, and deflating, Panther demands. The DSA-backed Bernie Sanders campaign of 2016 can claim some of the same consolations, with free college and single-payer healthcare suddenly entering the platforms of milquetoast Democratic Party candidates who previously showed no interest in them. Several DSA chapters in 49 states (sorry South Dakota) walk in the footsteps of the Panthers, providing supply-side social services: Houston DSA has helped rebuild homes decimated by Hurricane Harvey, while New Orleans DSA piloted a program to repair brake lights in areas where busted taillights are a traffic stop pretext for trigger-happy police.

Seattle DSA, in particular, has embodied this “multi-tendency” approach, as evidenced by its push to help other Seattle activist groups create a public bank that would give citizens interest-free student loans and housing grants. A sparkling display of Hampton’s fierce intellect in The Murder of Fred Hampton shows him discussing the details of this exact plan, lecturing a less-experienced organizer who wasn’t doing enough to educate people about the principles behind publically owned institutions. Through all of Seattle DSA’s efforts, the specter of yesteryear’s socialist struggles looms large.

“On the Left, it’s hard not to think about the legacy of infiltration and subversion that followed from the Panthers,” says Slansky. “Seattle’s new mayor, Jenny Durkan, has a history of imprisoning leftist activists with no charges filed against them. I suppose we’re not yet the same kind of direct threat that people thought the Panthers were. But when we start to face those concerns, we’ll know we’re doing something right.”

The Murder of Fred Hampton screens Monday, Feb. 19 at 7 p.m. at Grand Illusion Cinema. The event is free with a $5 suggested donation. More information here.