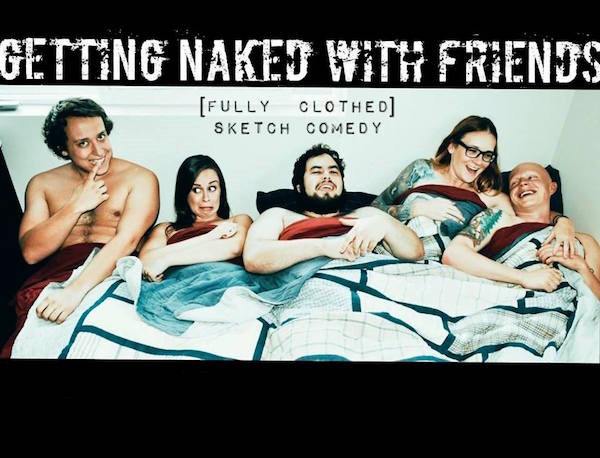 The first time I performed at SketchFest Seattle was in 2005. I was part of a year-and-a-half-old, two-man ensemble with a guy named Kevin Clarke. The name we performed under was so esoteric and terrible that it’s best for everyone if I keep it to myself. We’d been rejected from the festival the prior year—my guess is because we sucked—so we were pretty excited to get a 10-minute guest set on a Friday night. SketchFest was a big deal. They had board members, for crying out loud.

Kevin and I did our dumb thing on stage and the audience was very kind to us, one of just a few local acts in the festival. Eleven years later, there are no fewer than 20 Seattle acts in SketchFest this year. That’s right, I am lightly implying that Kevin and I were the sketch group that started it all, even though it’s manifestly untrue.

The 2016 festival runs Sept. 15–24 at venues around the city, and I’d like to showcase all of this year’s acts, but no I wouldn’t. That would be an insane undertaking and a 10,000-word article. I narrowed it down to six groups using a methodology so maddeningly complex that you would lose your mind if I explained it to you. Here they are. 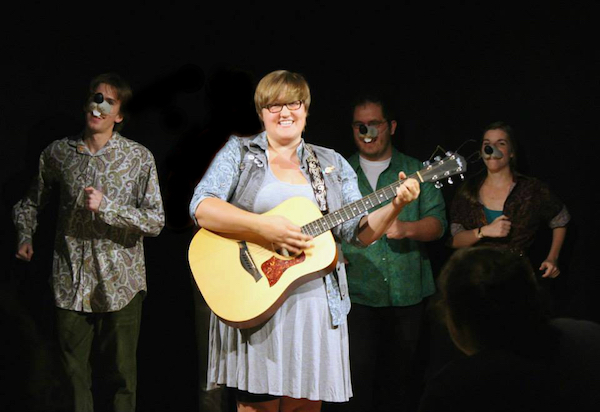 Performing at SketchFest for the fifth time, DTRBAR is one of those classic sketch outfits that have been together since college. If I may get into some fun technical sketch speak, these guys have really great transitions—switching from one sketch to another before you know what’s happening. Killing mid-sketch dead space is fundamental, and nobody does it better than this crew. They originally started out as a sketch and improv outfit, but decided to stick to the former after they realized, according to Nelson, that “our improv shows were objectively terrible.”

Nelson describes DTRBAR’s style as “dark whimsy,” which makes sense, considering that they count surreal UK shows like The League of Gentlemen and Jam among their influences.

Sketch to watch for:
Freeman: “’Pilma.’ Two people have an increasingly surreal conversation about how to break down a door. The reason—they want to see if a dog is behind the door.”

Without going into full detail, the members of GNWF were basically strangers who were connected (via emails) by SketchFest honcho Clayton Weller, who clearly has a way with organizing stuff. That disparate assemblage created a group with a strikingly varied array of styles and influences. “We’re different every time,” Parter says, “but there’s usually something a little raunchy that seeks to make a point about the ways in which humans commingle on this rock—and some absurd character work. We don’t get too dark, but we love playing with awkwardness—mostly because Evan hates it.”

Sketch to watch for:
Parter: “’Blue-Haired Grandma’ is the best I think—We set it up like a sitcom about a cool grandmother with blue hair (with a theme song and everything!), but she’s really just a sad old woman who struggles with basic life tasks and has been abandoned by her family. Remember when I said we don’t get too dark?” 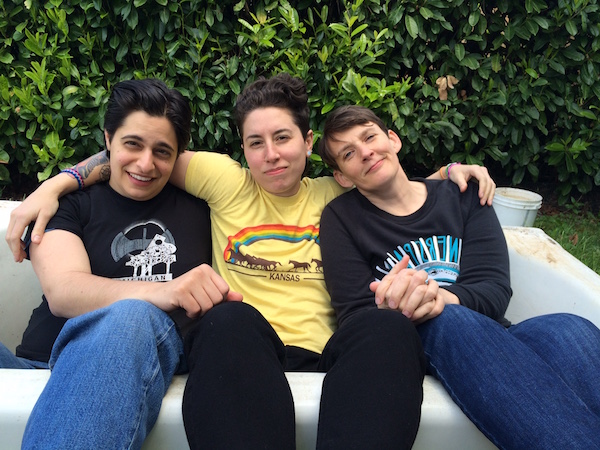 This will be Deep Lez’ second year at the ‘Fest. According to Nigro, the trio met in a therapy group—“What could be more ‘Deep Lez’ than that? Once we got done sharing our deepest childhood traumas, we realized that we looked like a dyke rock group from the ‘80s—all denim vests and haircuts and uncrossed legs—and since none of us know how to play guitar, we formed a comedy troupe instead.”

Like all things the talented and charismatic Nigro is involved in, you can expect Deep Lez to be bright and unique. You can also look forward to “memorable characters, a feminist agenda, yonic crystals, ‘suggestive’ fruits, and leaving the show feeling better about yourself and the world than when you arrived.”

In the near future, the group plans to “crush the patriarchy, get our own Comedy Central show, and maybe even start a Twitter account.”

Sketch to watch for:
Nigro: “’The Let’s-Be-In-Love Podcast’ features dating advice from Billie, a double Scorpio and lover of all things ‘woo’; Flame, a seasoned land dyke; and Jess, an ‘awkward turtle.’  Sample line: ‘Monogamy is for Republicans!’” 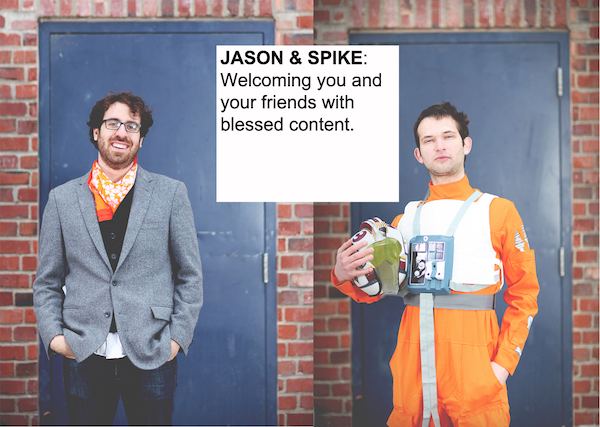 If I may retreat back to my own story again, a few years after Kevin and I did SketchFest for the first time, a group called The Ubiquitous They sprung up. I think that they intended the moniker as a joke, but eventually they indeed became ubiquitous around town. It helped that there were something close to 300 people in the group—all nice, funny kids. Miller and Friedman were founding members, who now live across the country from one another (top to bottom, I mean—Friedman lives in LA). As Miller puts it: “Spike brings the prestige of being a Stranger writer, former Grantlander, and LA resident. Jason brings the indie cred of not doing anything else of note.” They still pair up on occasion to deliver their distinct brand of casual, “two dudes arguing in a living room” humor.

Sketch to watch for:
Miller: “‘Boat Picture’—Spike accuses Jason of owning a boat picture he finds in the attic, intrigued at the possibility of knowing a boat enthusiast. It’s full of accusations, denial, Nordic references and boat words.” 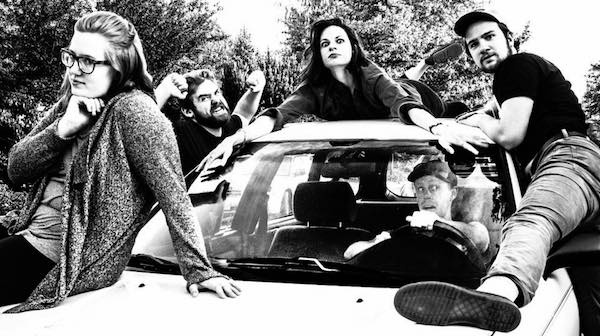 Villains is basically a sketch supergroup assembled, also by Clayton Weller, during Sketch Summit 2016. They’ve been together for less than 200 days and they’re already headlining the festival after securing the runner-up position at the SketchFest Fund Fight (GNWF won). Listening to Schirman run down their list of particulars, it’s not hard to see the appeal: “Big characters, absurd situations, refusing to use props, and unwarranted explosive dance numbers are our modus operandi.” I don’t want to get too “inside baseball” with my comedy fandom, but as far as I’m concerned, that’s a really solid MO. Sure, my own sketch group used props on occasion, but we always felt dirty about it afterwards.

Sketch to watch for:
Schirman: “’Beddy-Bye’: Father and son are getting ready for bed, but as they go through the motions, the boy shares his surprisingly existential outlook on life.”

This will be Day Job’s third year in a row as SketchFest headliners. Touring around the country (they just got back from The Chicago Women’s Funny Festival) and cited as one of Deep Lez’ biggest comedy influences, these guys are basically legends by this point. According to Auld, “Physically we have been performing together for 3 years but our souls have made comedy together for centuries. Our cycles have totes synced up.”

Asked to sum up her group’s style in one word, Auld offers “joyful.” When given several more words in the spirit of fairness, she adds: “musical, character driven, physical, and dance-y. We take low-brow humor and make it uni-brow.” Also forged in the fires of the Sketch Summit, Day Job is a testament to the strength, longevity and community that has taken form in the world of Seattle sketch comedy in the last decade. It’s a good thing.

Sketch to watch for:
Auld: “Our current favorite sketch is called ‘Fuck you Mrs. Anderson.’ We wrote it while drinking chardonnay at one of our ‘rehearsals’ and it involves a 5th grade talent show and spoken-word poetry.”