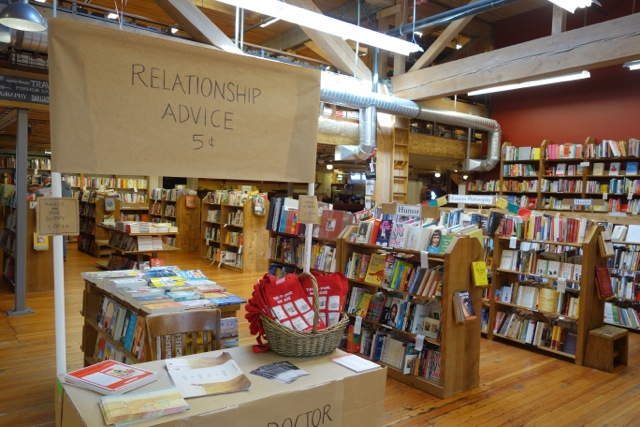 Last Saturday, a steady stream of sunshine and visitors coursed through Open Books: A Poem Emporium for Seattle’s first-ever Independent Bookstore Day. The Wallingford spot was one of 17 participating bookstores covering ground from Poulsbo to Bainbridge Island, the Eastside and Seattle. While regulars embraced an extra opportunity to book shop, the event successfully introduced new faces and families to the benefits of supporting local.

“We were up at 6 a.m. this morning to catch the 7 a.m. ferry for our first stop!” exclaimed a woman almost breathless with excitement. Visiting with three friends, she thrust her indie bookstore passport forward to be stamped.

The passport was a Seattle-specific event. Diehards who visited all 17 stores—with or without purchasing—could earn a local, yearlong discount. Nationwide, over 400 independent stores participated in the festivities and stocked day-only literary swag from Stephen King broadsides to autographed special editions and even tea towels emblazoned with bookish quotes.

Prizes aside, books and brick-and-mortar stores remained the real stars.

“What’s been fun is how many families we’ve seen in addition to regulars,” says Christine Deavel, co-owner of Open Books with husband John W. Marshall. “There have been a lot more kids.”

New requests like Teenage Mutant Ninja Turtle titles brought smiles. One family included three generations and almost certain repeat customers. Marshall remarked on an uptick in foot traffic and that most people were buying and not just dropping by for passport stamps.

“People are seeing the great benefits of visiting an actual space and being with people. We get to interact with them, but they’re also communing with each other,” Deavel says.

A handful of fans waited outside Elliott Bay Book Company for the doors to open. They were greeted by balloons, raffle contests and even a Charlie Brown-esque “Relationship Advice” booth manned by local luminaries like Nancy and Joe Guppy. Seward Park resident David George made a morning of it with his wife and daughter. The family participated in the store’s behind-the-scenes tour, which included free books and event tickets.

“It’s nice to know that we’re not the only people who buy books all the time,” George says, noting that their family budget specifically allocates money for book buying, a tradition of being “book poor” inherited from his grandparents. “We need to support these businesses.”

Scores of independent bookstores were in decline or closed following the economic downtown and novelty introduction of e-books. Predatory competition from big-box stores and Amazon continues to impact independents. However, the American Booksellers Association reports that the indie market shows signs of recovery with an over 25% increase from 2009 to 2014.

Part of the rebound is circumstantial—bookstore chain Borders closed in 2011 and Barnes & Noble has shuttered hundreds of locations. However, indies are also increasingly proactive in reclaiming their relevance. Partially inspired by Record Store Day, Independent Bookstore Day launched in California last year as an effort backed by the Northern and Southern California Independent Booksellers Associations. Its wildfire popularity spawned 2015’s national endeavor.

Elliott Bay Books is an example of a local success story. Opened in 1973, it was struggling before moving from its Pioneer Square location to Capitol Hill in 2010. Karen Maeda Allman, Elliott Bay bookseller since 1999 and events co-coordinator, hosted the store tour. She reported that 2014 was one of the store’s best years to date. Events like bookstore day will hopefully further solidify both sales and support.

“It’s a lovely day to celebrate our customers and colleagues. We enjoy having the opportunity to remind people why we’re here and that it’s a cool place to be—a place that’s all about the books,” Allman says.

“We’re drawing lots of people who aren’t already comic enthusiasts. We’re being able to introduce and give them something that’s interesting and sophisticated,” says Larry Reid, Fantagraphics manager. “It’s been more successful than I originally thought it would be, which is great.”

Phinney Books opened in summer 2014 and fully embraced the chance to further introduce themselves to customers. The shop offered extended hours, specially-made store memorabilia, in-store workshops, rotating discounts and even a morning spread of treats from the local bakery.

“We decided to just run with it when we heard it was happening,” says owner Tom Nissley. “Besides, it’s a fun excuse to put on a party!”

He speculated that he would have stocked more special items if he had known the demand, but plans to participate again if Seattle Independent Bookstore Day becomes an annual event. He and his fellow booksellers seem to agree that there is only one obvious drawback. “If I didn’t have to be here working, I’d certainly be out driving around myself!” Nissley confesses.