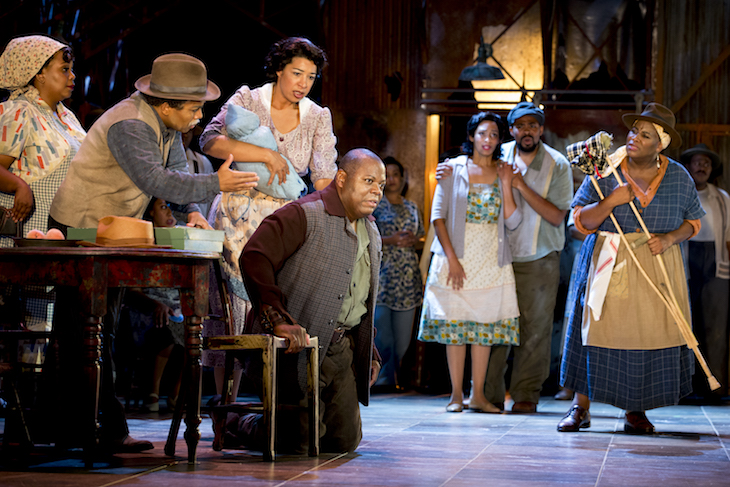 Seattle Opera’s summer opera is always a no-holds-barred sumptuous production of something special—and it’s always a delight to see something as much loved as Gershwin’s Porgy and Bess. This summer’s production at McCaw Hall, originally directed at Glimmerglass Festival last summer by Francesca Zambello and here by Garnett Bruce, is a cornucopia of vocal and visual riches.

Porgy and Bess is the first major American opera, the first to try to portray a contemporary black community and the first to insist on an all-black vocal cast. Opening in New York in 1935, this was all unheard of, and when the work first toured in early 1936, several in the original cast refused to perform at the National Theatre in Washington D.C. unless the hall was desegregated, which it was, temporarily. The opera didn’t receive its full due until 1976, when it was performed in its uncut glory at Houston Grand Opera with John DeMain conducting, and since then it has taken its place as an iconic American work.

It has its troubling aspects. Composed by a white Jewish composer, George Gershwin, with a libretto—by his brother Ira Gershwin and DuBose Heyward, also white—taken from a play by DuBose and his wife, Dorothy, Porgy and Bess is a white 1930s view of a poverty-stricken black community in the deep South, albeit a sympathetic one and researched at the time, both musically and culturally, by Gershwin and the Heywards. It includes prostitution, drugs and violence and portrays a close-knit, religious, hardworking community.

Musically, Porgy is glorious, with irresistible melodies one after another and a strong base in jazz and gospel styles, and composed with a sophisticated, complex classical score requiring classically trained singers.

Seattle Opera’s large cast is superb. (I saw Saturday’s opening night cast.) It includes top-ranked international opera singers, among them soprano Angel Blue as the manipulatable Bess; bass-baritone Alfred Walker as an honest, warmhearted and genuine Porgy; soprano Mary Elizabeth Williams as the kind but righteous Serena, bereaved near the beginning; baritone Lester Lynch as the villain Crown, oozing malevolence and violence from every pore; tenor Jermaine Smith as the dancing pimp and drug dealer Sportin’ Life, with his trademark charm cutting no ice with the more upright members living in Catfish Row; and soprano Brandie Sutton as the young mother Clara.

There are many more who should be mentioned, as each solo singer was strong in their role, both as actors and vocally, down to the briefest. The most memorable of these was contralto and actress Judith Skinner as the Catfish Row matriarch Maria who gives short shrift to Sportin’ Life. The large, excellent chorus deepens the action.

Peter J. Davison’s three-dimensional, dilapidated tenement set consisting of what appear to be old metal sheets falling to bits. A rickety staircase and balcony are particularly effective in the hurricane scene when one can see sections flapping in the wind, lightning visible through the holes while the one ceiling fan swings wildly. Lighting by Mark McCullough shows times of day as well as weather.

Zambello updated the show to the 1950s, which makes little difference in community attitudes to the white police officers, but influenced the costumes by designer Paul Tazewell, the one black member of the production team. The natty outfit of Sportin’ Life stands out, bolstering his character, and Bess’s dresses are satiny when she’s Crown’s drug-using girlfriend but creamy during her happier life with Porgy.

John DeMain has now conducted Porgy and Bess all over the world and this is the fourth time he has taken it on here. Few people know the work as well, and DeMain’s musical directing is insightful, supportive of the singers, full of nuance as well as cheer, bounce, sadness, beauty, love and fear. The orchestra, members of the Seattle Symphony, followed his every intention with their usual accomplished skill.

The whole makes for an enthralling evening, one where you can’t take your eyes or ears off the stage, no matter how well you may know its wonderful songs like “Summertime,” “It Ain’t Necessarily So,” “My Man’s Gone Now,” “Bess, You Is My Woman Now,” and so many more. It’s a lively, well-knit, colorful and moving story and production, well worth seeing.

Porgy and Bess runs through Aug. 25 at McCaw Hall.