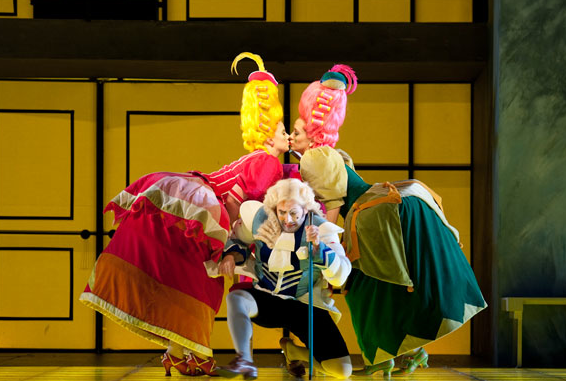 It’s a child’s palette on stage at McCaw Hall for Rossini’s La Cenerentola (Cinderella). Think of a six-year-old with untrammeled imagination and a new box of crayons and you’ll have the production’s color chart. Hair, for instance, comes in white, yellow, orange, pink, electric blue and lavender in outrageous wiggery, while costumes are over the top 18th century foppism.

The whole production is enchanting from beginning to end, and was first commissioned by opera companies in this country, Spain, Wales and Switzerland. Seattle Opera brought in the original team from Barcelona, a group with roots stemming from the old commedia del’arte: stage director Joan Font, set and costume designer Joan Guillen, lighting designers Albert Faura and Kiko Planas, and choreographer Xevi Dorca.

Rossini’s version of the story is slightly different from the one we know—a bullying stepfather rather than stepmother, the prince’s tutor instead of a fairy godmother, a prince who swaps places with his valet to find a girl who loves him for himself, bracelets instead of a slipper, and a Cinderella who refuses to be beaten down.

The music bubbles with life, and the excited, chaotic, sometimes totally confused thoughts of the characters tumble out in patter singing for up to six at a time.

The cast is largely young, with well-matched voices which easily encompass the roulades, leaps, trills and ornaments which are the hallmark of bel canto opera, while the three sisters look appropriately slender and marriageable.

Mezzo-soprano Daniela Pini makes her Seattle Opera debut as Angelina (as Cinderella is called here). Her biggest aria comes at the very end, after over three hours of acting and singing and she still sounded as fresh as a daisy at that point on Saturday’s opening night. Also in his debut here, Rene Barbera as Prince Ramiro has a quintessentially Italian-style tenor with easy top notes, though he tended sometimes to sing too loudly at those moments. Baritone Brett Polegato as Dandini the valet made the most of his role (in which he arrives on a two-headed horse) and clearly feels his oats being the Prince for a day and keeping his master in a subservient position. One of the pleasures of the performance is the humanity of it. Prince and valet are friends and each is trying to keep the other from stepping out of his role, while Dandini is teasing the other as well.

The stepsisters come from Seattle Opera’s Young Artists program: mezzo-soprano Sarah Larsen and soprano Dana Pundt mostly sing in duet, and they act in concert but also in rivalry. Another delight of the production is how close they come to slapstick without ever quite going there. Pundt’s voice is a bit lighter than the rest of the cast, but this is only really noticeable when she is singing from the back of the stage.

Arthur Woodley as the tutor Alidoro brings weight of presence and his fine bass to balance excitable behavior on the part of many, but particularly bass-baritone Patrick Carfizzi’s splendid Don Magnifico. This is a buffo role which Carfizzi plays to the hilt, but again, never quite to slapstick level.

The usual Cinderella story includes mice. The direction team has instead added six rats, which infest Magnifico’s deteriorating house. Helpful to Angelina who regards them as pets, ignored by the others, they are choreographically great fun to watch as they are on stage most of the time as observers. The male chorus adds pageantry.

The spirited whole is kept running smoothly by young Italian conductor Giacomo Sagripanti, also making his Seattle Opera debut. In short, this is a production which in all aspects will entrance children as well as the latent child in adults.