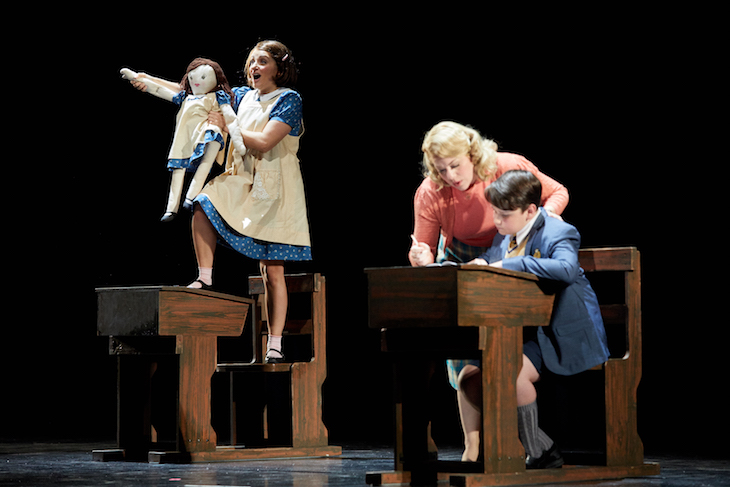 Benjamin Britten’s opera The Turn of the Screw, being presented now by Seattle Opera, carries the same ambiguities as the Henry James story on which it’s based, the same shivery uncertainties, the same feeling of the ground moving under your feet. Are all the events in the mind of the newcomer?

Briefly, the tale is of a young governess hired to live in a remote country house to watch over two children, Miles and Flora, who live there with just an elderly housekeeper. The children’s guardian, who hired the governess, informs her that doesn’t want to be bothered about anything—everything is in her hands.

At first, the two children seem sweet and charming. Then a letter arrives expelling Miles from his school for undefined behavior injurious to others, which mystifies both the housekeeper and governess, who decide it can’t possibly be true. Then, an apparition of a strange man in a tower window unnerves the governess. As the governess grows to love the children, she gradually comes to believe there are two phantoms that seem to have manipulative power over them: the master’s ex-valet, Peter Quint, now dead, and the children’s previous governess, Miss Jessel, also dead. The children show some odd traits, also unnerving, and Miles is particularly remote.

But is all this just in the governess’s head? Are the children actually possessed? Are they being used as puppets by a malevolent Quint? The truth, the reality is never clear.

Stage director Peter Kazaras has masterminded a brilliant conception and production. The projected scenery, designed by Adam Larsen and enhanced by Connie Yun’s lighting, sets the mood as well as the setting, starting with the governess’ journey to the house. The images—train and station, swaying trees, the house itself—are all intentionally a little dreamlike, a little fuzzy around the edges. The lighting is dim bluish twilight, as it is almost throughout the opera, except for spotlights on the action itself. Wavering water below swaying trees indicates a lake; an outline of the house opens as needed in the middle, for a staircase and railing to rise to a landing, and windows which slide sideways to show Quint or Jessel exerting their will on the children.

A fine young actor, Wu sang Miles Sunday afternoon with sureness and aplomb, his voice ringing true on every note, absolutely clear and carrying through McCaw Hall without difficulty. With what today would be described as PTSD—though we never discover what actually happened to him at Quint’s hands—we see Miles holding together, listening to and swayed by Quint while holding himself away from the governess’s affection until the very end, when he’s finally torn apart by all he has been holding inside. Miles is the crux of the story; Flora’s role is lesser, but Mafi moved and looked every bit about age 10, and was chilling in her own right as she showed Flora’s feelings through her big rag doll. Are they her feelings? Or what Miss Jessel is wanting her to think?

All the adult singers did well. There was nothing ghostly about Bliss’s compelling voice, while the three women easily brought out their differing characters. Britten’s superbly designed score for a small orchestra of 13 musicians has its own eeriness adding to the atmosphere and supporting the singers. It was superbly played by Seattle Symphony musicians and conducted in his Seattle Opera debut by Constantin Trinks. It’s one of the most memorable productions the opera has done, in that every detail is equally strong, equally riveting, the story gripping.

The Turn of the Screw continues through Oct. 27.