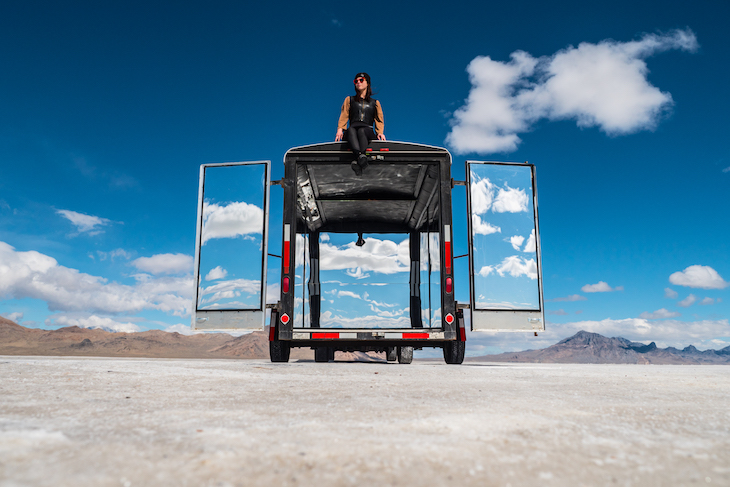 Madeline Jo's 'SpaceBox' at the Bonneville Salt Flats. The Seattle Design Festival features a unique version of the installation. Photo by Michael Rivera

In the worst moments of 2018 so far, trust has been in short supply—from Facebook breaching our data to President Trump and his allies abrading trust in the truth itself. So it’s apropos that Seattle Design Festival has chosen trust as the theme for its annual public festival, the largest design event in the Pacific Northwest. The festival opens today and runs through Sept. 21. The line-up includes exhibitions, public art, discussions and events related to trust and civic issues.

“Each year, our board members and staff get together to talk about what’s happening in our society, city and communities,” says Debra Webb, director of Design in Public, the nonprofit that organizes the festival.

The national political atmosphere was an obvious marker of mounting distrust, but Webb says trust is a local issue as well. “This summer, we co-organized a keynote and open mic about the Central District in collaboration with the Africatown Central District Preservation and Development Association. From that, it became clear that with the efforts for redeveloping and building in the Central District, the people from the community don’t trust this process—they want to lead this process.” The panel talk Design For Belonging continues this conversation, which Webb calls an opportunity to “talk more about how we preserve neighborhoods.”

She also highlighted Recharge the Battery, a community-driven initiative asking for creative design solutions along the Battery Street Corridor, in relationship to the closing of the Battery Street Tunnel. “The folks in Belltown were not satisfied with the proposed design solutions, so they’ve created their own grassroots efforts to reimagine what it could be.” And to address the doubts around artificial intelligence, the festival invited global designers working with AI to talk to the public in a panel discussion paid for by Microsoft.

The festival kicks off tonight with a swanky party at the Collective but opens this weekend with Block Party, a free outdoor street fair in Occidental Park featuring touchable interactive art installations and performances. With help from local architects and designers, intrepid four-member artist collaborative Electric Coffin created an installation made with some nuclear factory fan blades, a symbol for the overlooked historical disasters and a segue into a discussion about public trust. SpaceBox, a sensory deprivation/infinity illusion installation that artist Madeline Jo inaugurated at this year’s SXSW festival also makes an appearance, as does the installation Building Blocks, which is not merely a giant Jenga game; messages on its blocks will prompt players to think about what trust means to them and will honor notable women and minority designers.

After the weekend, the programming continues with an all-abilities moving class by Dance Church and a workshop to “build trust and collaboration,” led by Velocity Dance Center. Additional discussions take on themes ranging from climate justice to driverless cars and “unintended consequences of tech.”

Despite these offerings, the design festival recently seemed to have lost the trust of some local creatives. After it posted on social media that there were still “about 20 open spots for #volunteer #photography” at the festival, which it called “an excellent opportunity to network with other design-minded folks while enjoying behind-the-scenes access,” video editor and director Tristan Fairchok dryly posted a link to an article titled “Why Photographers Should Never Work For Free” as a comment on the post.

Photographer and artist Rafael Soldi also posted a rebuke: “Photography costs money, networking opportunities don’t pay the rent. If you want a job done you have to pay people—why are you perpetuating the most hurtful practice to designers and artists? You should be preaching the exact opposite of this.”

“I get it,” says Webb about this response to the festival’s call for volunteers. “But we are a small nonprofit. This festival is donation-driven and volunteer-powered. We’re very different than other design weeks. We are not a product-driven design trade show. Almost everything we produce is free.”