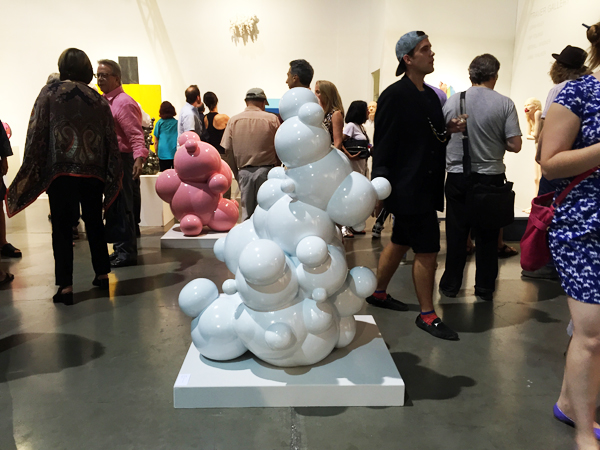 Last night over 4,000 collectors and art aficionados packed into CenturyLink Field Event Center for the opening night of the inaugural Seattle Art Fair. Meanwhile, a few blocks away at King Street Station, Out Of Sight also opened its doors to the public. There, work by over 100 local artists is installed across the transformed third floor. Following are the frank first impressions of three City Arts editors who attended both events, some of whom were art fair virgins before last night. —Amanda Manitach

JONATHAN ZWICKEL
Before Thursday night, the last time I found myself wandering the bowels of CenturyLink Field was in 2007, when Daft Punk performed to a crowd of thousands from inside a giant digital pyramid. The Seattle Art Fair opened at a similar scale last night, with a similar level of hype and expectation. The crowd of hundreds snaking down the sidewalk outside—people waiting to get in—was similarly stylish, mostly white and mostly young. Before even setting foot into the Fair it was a scene.

Once inside, the reality of it hit me: The Art Fair positions modern visual art within the same cultural echelon as a pop-music event. I had a hard time understanding why that would be the case. Music at that scale is immersive, inescapable, and so in its presence you succumb to the collective experience. Visual art stimulates a different sort of nerve, one that benefits from isolated discernment, one easily overwhelmed and benumbed. The sprawling size of the Art Fair is part of its appeal; its gravity is undeniable, drawing artists and galleries and surely ticket buyers from around the world. But it lost me the moment I stepped in the door.

I say all this as someone who’s never been to one of these big-budget blowouts before. When I lived in Fort Lauderdale I attended Art Basel two years in a row and avoided the convention center both times, opting instead for the satellite parties and shows scattered around Miami’s Design District. I’ve been to South by Southwest many times and I’ve witnessed the gravity of that event changing it from a hotspot for unsung creativity to a demanding, mostly unrewarding requirement for young artists hoping to make a career. As Seattle joins the ranks of Houston and San Francisco and New York and Miami with a snazzy, international art world fete, we should be wary of our Art Fair being swallowed by the same corporate cred grab.

In its modest scale, Out of Sight, the official unofficial Seattle Art Fair at nearby King Street Station, is far more appealing. Featuring 100 Seattle artists, it’s a large-scale affair in a smaller, more localized context. I’ve said before that as the constant flow of culture generates overwhelming noise, savvy arts patrons must apply filters, and one of those filters should be proximity. Seattle’s music scene is producing rock, electronic, hip-hop, avant garde, jazz and kitchen-sink stuff on par as any city on the planet. Without the same degree of expertise in the art world, I wonder if the same can be said of our visual art. What I saw at Out of Sight suggests we’re there. I can’t even remember what I saw at the Seattle Art Fair.

LEAH BALTUS
I arrived at Seattle Art Fair during the early portion of the preview and found the air-conditioned convention space elegantly transformed; this was not the WaMu theatre I remembered. Gallery booths lined the perimeter of the space and clustered in groups in the middle in a way that flowed smoothly and felt a lot like less awkward than 2012’s Affordable Art Fair at Seattle Center—my only previous experience with an art fair.

Wandering among the booths, various artworks caught my eye and drew me in, most especially a series of paintings from New Orleans’ Octavia Art Gallery by Regina Scully, which stood out for their color, sense of space and loose, enchanting strokes giving shape to imaginary worlds. Despite an enormous range of mediums and aesthetics on view, the Fair showed an obviously high bar for quality (again much, much better than the Affordable Art Fair a few years ago). I didn’t particularly care for all of it (like, say, the strange little dog-on-a-leash sculptures or the warped perspective of an almost life-size guy holding a Starbucks cup) and the endless variety felt somewhat discombobulating, but I appreciated the composite of outstanding contemporary art, and the way the participating local galleries added to it.

Each time I spotted a little red dot that marked a sold piece, I felt a little thrill, casting my eyes around at the well-heeled crowd and hoping all of them were collectors on the hunt. “Imported or local?” my companion and I asked as we gazed upon the fashionable, moneyed people in our midst. Were these Seattle’s mythical tech elite in the flesh? Or had they been enticed to Seattle for the occasion?

Just before I left, the more proletariat opening night tickets became valid and an enormous line was stretching along the entire west side of the stadium—a veritable crowd eager to get inside! Seattle turned out for the affair—a good sign.

From there I walked up to King Street Station to check out Out of Sight. I no more then crossed the threshold into the space before getting doused by its overflowing vibe of Emerald City cool. Whereas Seattle Art Fair was a bit sterile, this was anything but. The curators had successfully converted the raw third-floor space into a sprawling gallery, presenting 100-plus local artists in a wide variety of media.

The whole experience—the opening party as well as the artworks themselves—felt remarkably cohesive. Though the artworks individually represented many different styles, forms and tastes, collectively they revealed some of our creative community’s signature appetite for experimentation, as well as its growing prowess in the visual arts. It’s a damn good look for anyone who wanders over from CenturyLink and an impressive exhibition of local work that should lure in people by the droves this weekend.

GEMMA WILSON
With the exception of one day at the 2003 Venice Biennale, I have no experience in the world of international art fairs, so when I walked into the Seattle Art Fair at Centurylink Field Events Center last night, everything seemed much more calm and quiet than I’d imagined (we’d come early for the press preview). The orderly, wide-open grid made it easy to make a fast circuit of the offerings, both familiar and unfamiliar. There’s Greg Kucera Gallery front and center, flanked by Takashi Murakami’s giant, platinum-leafed “Yume Lion (The Dream Lion),” standing guard at the Gagosian booth.

Familiar images—Christopher Boffoli at Winston Wachter, our own Amanda Manitach at Roq la Rue—blended with enticing new colors and shapes in what quickly became the art soup in my brain. Raymond Pettibon’s thick smudges of color and text at the David Zwirner booth; the vivid, perspective-defying paintings of Regina Scully at Octavia Art Gallery; Al Farrow’s detailed, sinister Synagogue V, architecture-in-miniature made of steel and gun parts at Forum Gallery. I can’t remember the artist or gallery displaying a giant digital photo of a man with stunning blue eyes, which became unsettling when it turned out to be a short looping video—every so often the man would blink. Very cool, exceedingly creepy.

The clinical white walls and hangar-like space hardly made for a comfortable, homey experience (nor did the tiny red stickers that whispered, “I have impressive amounts of disposable income and unused square footage”), but that foreignness made it easy to focus on the art, and the huge quantity and variety of work meant I couldn’t overthink it. Things either jumped out at me or they didn’t, and the things that I loved (or hated, or feared) stuck in my brain. Maybe one day…

As we left SAF, the line for entry was already snaking halfway down the block outside, and growing by the second. Over on the third floor of King Street Station, the Out of Sight party was the polar opposite of our ten-minutes-earlier experience. Brick walls vs. crisp white installs. Champagne and white wine vs. Rainier tallboys and Goodship cookies. Air-conditioned quiet vs. raucous sweatbox.

I had a much easier time actually absorbing and enjoying all the art at Out of Sight— Casey Curran’s square sheet of undulating golden pyramids, Joey Velktamp’s cheeky, poignant fabric hangings. The much-less-overwhelming amount of art helped, as did the fact that I’m more comfortable at a house party than a high-priced gala, but there is something about the casual art scrum that makes purchasing art, living with art, an enticing, accessible idea—collecting as investment in community. The less-regular layout meant you had to work a little harder to see everything, but the energy of the place was intoxicating, and an invigorating counterpoint to (and entry point for) the massive, formal affair down the street.