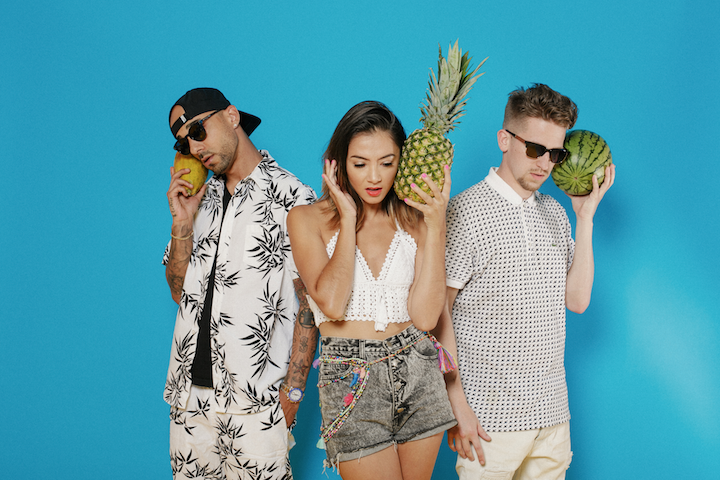 “Celebrate together ’cause nothing is for sure / Forget about tomorrow or tallying the score.” With that lyric from the song “Top Down,” singer Hollis Wong-Wear captures the energy of young people feeling the summertime. It’s an energy that pervades the Flavr Blue’s new album, Blue Dream. Celebrate while you can because the seasons, like youth, are fleeting.

Looking to broaden their musical horizons, Wong-Wear and bandmates Isaac “Lace Cadence” Sims-Porter and Parker Joe spent last winter and spring honing their skills as writers and producers. Blue Dream, released in late October, showcases the trio at their most cohesive yet, blending hip-hop, rap and electronic beats into 14 tracks that chronicle relationships, long days with friends and aspirations of making it big.

“We were trying to get the album out in June, but…” Wong-Wear tells me, trailing off into laughter. “Initially, we thought this was a great summer album,” Sims-Porter adds. “But as time went on, we had to make it work. [Now] people are telling us, ‘This is keeping me out of the gloom hole.’” As Seattle descends into its rainy, gray winter season, the band is happy to provide a ray of sunshine for their hometown, even if the timing was unintentional. “It’s some mental Vitamin D for sure,” Sims-Porter says.

To record the album, the band left Seattle and headed for Los Angeles, allowing the change of scenery to force them out of their comfort zone. “Seattle is this small, DIY community saturated in rain and surrounded by mountains,” Wong-Wear says. “Los Angeles is the perfect counterpoint to that. It’s really smoggy and full of pollution, traffic, and just wide and expansive.” These days Wong-Wear divides her time between Seattle and Los Angeles; Sims-Porter and Joe spend most of their time in Seattle when not on tour.

Hustle as a means to success is a recurring theme throughout Blue Dream, namely in “Faded” and “All On Me.” In “Cuz I Wanna,” Wong-Wear sings: “I’m laughing when they call this life a hobby/I’m sure that no one hustles harder than me.”

But the album is also about being young in a time when holding onto dreams is often as difficult as achieving them. Spurred by the country’s current sociopolitical climate, the band felt compelled to address politics through a critical lens. In “Fetti & Spaghetti,” Wong-Wear raps, “It’s 2017 and there’s Nazis in the White House/People wouldn’t listen, now they’re quiet as a church mouse.” In a song peppered with whoops and background laughter, the line is a sudden temperature change.

“None of us in the group are apolitical people,” Wong-Wear says. “This is not the time for people to say, ‘If we just love each other all the time, then everything will go away.’” The band members recognize that pleasure and pain can coexist, and sometimes that means pausing the celebration to contend with upsetting realities.

“Personally, I’ve been conditioned to be likable and want to create a space where everyone feels good,” Wong-Wear says. “But nothing’s going to move forward if we don’t make people feel uncomfortable.”

Including romantic relationships. The song “Simple Love” suggests that loving someone is anything but simple. In “Picture Perfect,” Wong-Wear sings of being “lightheaded and in love” in a long-distance relationship while acknowledging the strain that differing time zones place on the relationship. The beauty of Blue Dream is its recognition that these realities—whether political or personal—are fleeting, too.