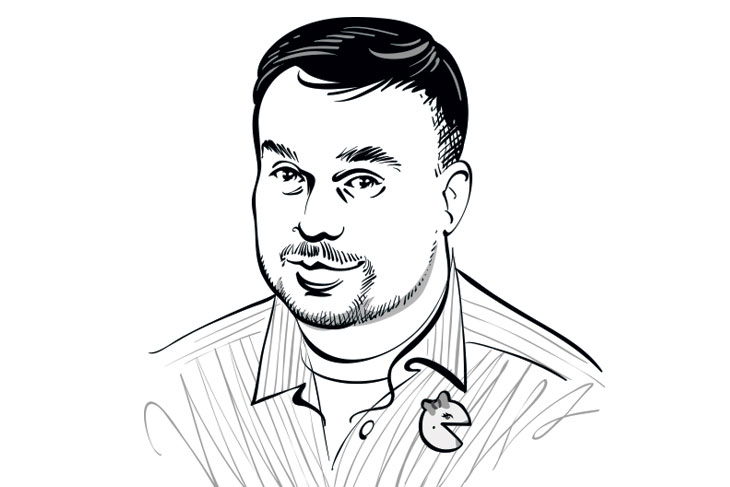 Scott Shoemaker steals whatever scene he’s in, and even some he’s not. His high-octane, higher-comedy performances bedazzle everything from Ian Bell’s screen-to-stage Brown Derby series to long-running December show Homo for the Holidays, as well as his wheeze-inducingly funny star turns in his theater-cabaret shows about Ms. Pak-Man, a boozed-up, washed-up, lemon-yellow diva. But he also bedazzles behind the scenes, writing on Kitten N’ Lou’s Holier than Thou and Camptacular! and working with BenDeLaCreme on scripts like horror-cabaret-theater show Beware the Terror of Gaylord Manor. This month, Shoemaker steps back into the clairvoyant Leonora Doddington’s pumps in Gaylord Manor while also underway with his brand-new holiday show, Scott Shoemaker’s War on Christmas, premiering at Re-bar this winter.

What’s the first show you did in Seattle?
The first one that’s worth talking about was 2005 or so, I did my first Brown Derby. I had this big period of my life where I wasn’t really doing anything creative. I was in a band for a bit, which was great but fizzled out. Then [Brown Derby] got me back into the scene and I started to get more work. I started working with BenDeLaCreme and Kitten N’ Lou, and we started doing Ms. Pak-Man in 2013. My partner Freddy and I write that together, and he’s the funniest person alive. We started small, thinking let’s just have some fun, and now it’s taken over my life. Because we’re always together, we’re basically talking about it all the time. It’s fun, it’s something that we share, and it keeps it interesting and original because we’re always marinating.

How many shows do you have cooking at a time?
There’s always something. The biggest thing right now is our new Christmas show. I have Gaylord Manor coming up, then we’re taking Ms. Pak-Man back to San Francisco. It’s getting hard to have a full-time job and do all this stuff. And I love doing it, I’m not complaining.

It’s not not worth complaining about performing all the time and still having to keep a full-time job.
It does get frustrating because there’s no infrastructure to promote people being independent artists. Becoming a producer or freelance actor and trying to sustain yourself on that—it’s too risky in this city. It’s difficult and it’s scary and I’m not young [laughs]. But if I wasn’t doing this I would be very unhappy.

Tell me about War on Christmas and why you formed Shoes & Pants Productions to present it.
As we start to hire more people and bring in more money—at least it looks like we’re bringing in more money because we’re selling more tickets, but we also have way more expenditures—there are tax reasons to [form the company], but also it helps support other people’s stuff. We thought it would be a good idea to do the Christmas show under that umbrella because it’s the most ambitious thing we’ve ever done. The cast is larger, it’s all new sets and costumes, and our ideas are never small. So, it’s worth investing in that, and hopefully it becomes a tradition.

What can you tell me about the show at this point?
We don’t want to offend anybody, but we’re not religious people and we’re also really into Christmas, and that’s what the show is exploring. There’s so much cultural baggage around a holiday that’s shoved down everyone’s throat, and when a group of people are saying, you’re not doing it right, you’re starting a war on Christmas, for people who are Muslim or Jewish, queer people that feel rejected by the church, things like that, it can be difficult. The show is a good, warm time, but goes off the rails immediately and turns into something insane.

How would you describe your overall aesthetic?
We’re sort of in that absurdist tradition where it’s not escapist in the way that you would think of some Hollywood movie like Fast and Furious. It’s escapist in a way that you don’t necessarily think about what’s troubling you, but you can look at the absurdity of life in general and laugh at it. Get out and hallucinate a little bit. Even Gaylord Manor is absurd. It has moments where I’m not just going for laughs, which is great, but it’s also couched in something subversive and crazy.