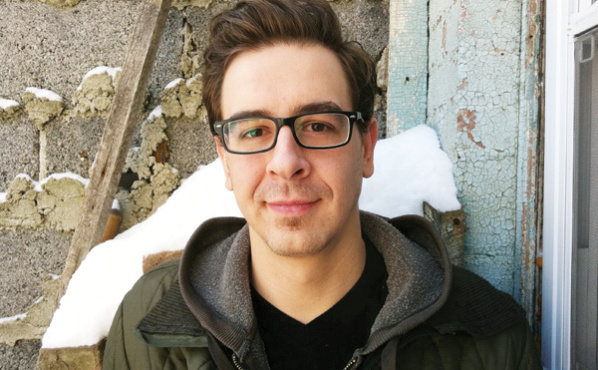 Any comic can tell you that the funniest moments in a comedian’s life don’t occur onstage. They happen in the company of other comics: in the green room, at the hotel bar, in the car on the way to the gig. That is where spontaneous hilarity occurs most reliably, and those are the moments that sustain the work onstage. “Modern Comedian” is a look at those hidden side streets and private alleyways that feed into the grand boulevard that is Comedy as it is experienced by an Audience. The series’ creator, Scott Moran, believes that if you just put a camera in front of funny people, interesting things will happen.

Podcasts like WTF with Marc Maron have popularized the confessional style, giving fans an unprecedented, intimate peek into comedians’ lives. Moran’s method is to narrow the focus to a single topic, capture it on video (one DSLR camera, no crew and no boom mics or lighting rigs), edit it and put it out in ten-minute episodes. The end product is a lo-fi but sleekly edited document.

“This is just cracking open a door of show business and personality. Comedy nerds-and I say ‘nerds’ with love-that’s what they want to see. They want to get to know their favorite comedian on a more personal level. That’s what WTF has taught us.”

Moran, a Seattle expatriate living in Brooklyn, is a comic. He was one of the founding members of the People’s Republic of Komedy and an organizing force behind much of that group’s early success. As an insider, he’s uniquely positioned to capture some of the more fleeting events in a comedian’s life from up close. “That’s a big part of it,” he says, “I’m doing all my friends and people I know first. I’m just letting them portray themselves, and I’m filming it.”

There’s a magical moment in the fifth installment of “Modern Comedian.” Rory Scovel, the subject of this episode and a huge Batman fan, has been eager to do his Batman material on the weekend of the premiere of The Dark Knight Rises. Then he hears about the Aurora shootings.

He equivocates. “Then there’s a part of me that thinks, well, maybe you hit it head-on and you do the Batman jokes.”

“A couple people. What, everyone else didn’t go yet?”

A smattering of nervous laughter surrounded by palpable silence. Too soon? You can almost sense the audience bracing for yet another comedy scandale de blog.

Scovel is refreshingly oblivious. “You got other shit to do? You don’t give a fuck about Batman? What the fuck is that? You didn’t buy your tickets a month ago like the rest of us who hate sex?”

Laughter ripples tentatively. Scovel breaks into a bit about how Batman is always ducking out on Commissioner Gordon mid-conversation. How sometimes Batman’s grappling hooks come back and hit him in the face. “That’s why I wear a mask, I don’t want anyone to see the bruises.”

The audience is his. He’s got them in the sweet spot, that place of most delicate sensitivity. The laughter is childlike and cleansing. It’s a topical cleanse, like peroxide bubbles on a fresh wound. This is comedy confronting tragedy head-on. Applause breaks out.

Moran was on the road with Scovel, in the midst of filming a planned installment about Scovel’s love of Batman when they learned of the Aurora massacre. “We had to think about, ‘Do we scrap this episode? What do we do?’” he says, “And I thought, ‘Let me just film you talking about the tragedy, and then if you still want to do the Batman jokes, I’ll film it, and maybe we’ll get something, maybe we don’t. If you don’t want to do the Batman jokes at this point, I understand, but let’s at least talk about why you would or wouldn’t want to do them.’”

The result is a recorded glimpse at the healing power of comedy, filmed at a time when the entire country was grappling with horror and fear. “People [at the show] were like, ‘Where the fuck is this going?’ and then immediately, because Rory’s so good, he goes into silly mode and people forget about it and you get an applause break because people are like, ‘Oh my god, you just helped us not think about that thing.’ He helped heal it a little, hopefully.”

The most-viewed episode of “Modern Comedian” also confronts darkness and loss. It’s the episode with comedian Lynn Shawcroft, widow of comedy icon Mitch Hedberg. Since Hedberg’s death of a drug overdose in 2005, interest in his creative output has only increased, culminating in an album of unreleased material in 2008 and speculation that Shawcroft has piles of notebooks full of even more unseen jokes.

“I’ve been friends with her for about three or four years, we met at Bridgetown [Comedy Festival]. I saw that she had tweeted out some of Mitch’s jokes from the notebooks, three of them that nobody had ever heard before, and people flipped out. Huffington Post wrote an article about her tweeting out some of his jokes…I emailed her the Kurt episode and said, ‘I might be way out of line on this one but I have to ask, do you think it’d be cool to do an episode about Mitch’s notebooks? And then she wrote back, ‘Yes, this is amazing, I get what you’re doing, this is perfect, let’s do it.’ Lynn was brave to talk about this stuff because it’s hard, obviously, and she hasn’t really talked about it very much yet so I was really excited that she thought this would be a good format to start with.”

That episode reached over 100,000 views on YouTube in less than a month and established “Modern Comedian” as a must-watch web series in the comedy blogosphere. It also serves as further evidence that the creators best suited to tell the story of comedians are comedians themselves, and that there is a broad and growing audience for this sort of comedy navel-gazing, as evidenced by mainstream critical acclaim of the television show “Louie.”

Moran plans to keep releasing episodes, and he says he has some “big ones” in the can, though he’d rather keep it secret for now. The latest episode features Andy Haynes, another Seattle native, as he prepares for a set on “Conan.”

“People [in the industry] underestimate how the normal moments in a comedian’s life are interesting to comedy nerds,” Moran says, “Almost every time I film somebody they stop in the interview and say, ‘Is this boring?’ and I’ll say, “Trust me, it may be boring to you but it’s interesting to everybody else.”