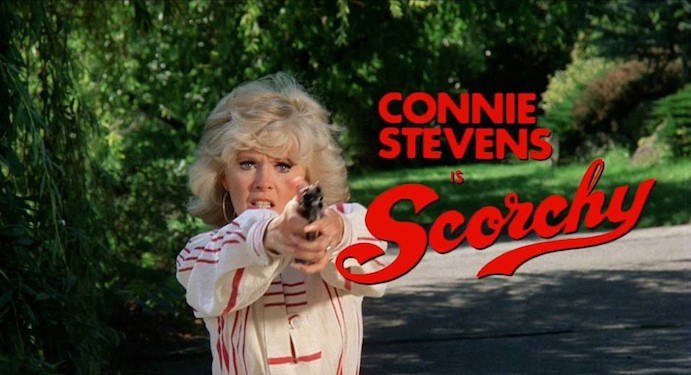 Sometimes the most valuable historical relics surface in the strangest places. On Thursday night the Ark Lodge Cinemas’ Dark Lodge series presents one such artifact—a curiosity that offers a fascinating glimpse into the Seattle of yesteryear, wrapped in an entertainingly schlocky B-movie package.

Scorchy was sort of a low-rent cousin to the Pam Grier action movies that were waning in popularity when the movie hit theaters and drive-ins in 1976. Back then, grunge and the tech boom were but twinkles in Seattle’s eye and most of the world dismissed the city as a remote little backwater town. But for a couple of years in the mid-70s, Seattle became a popular location for Hollywood projects, including Alan J. Pakula’s great 1973 paranoid thriller The Parallax View, which boasts a fine supporting performance by the Space Needle, and The Night Strangler, a fun made-for-TV 1973 horror flick that made inspired use of the old Seattle Underground. John Wayne even sauntered into the Emerald City in 1974 to shoot a crime movie called McQ.

Scorchy, written and directed by exploitation veteran Hikmet Avedis, was among the last Hollywood features shot here during that period (at least until the success of An Officer and a Gentleman periodically brought Tinseltown back to the Northwest during the Reagan years). It’s indisputably the crappiest—and almost as indisputably, the most fun—of the lot. Connie Stevens plays Jackie “Scorchy” Parker, an undercover narcotics agent posing as a freelance socialite airplane pilot. She’s poised to bring down a heroin-smuggling operation run by suave continental kingpin Philip Bianco (Cesare Danova). Action, romance, violence and skinny-dipping in Union Bay ensue.

Its PNW connection aside, Scorchy’s a kick in the pants for Me-Decade archaeologists, from the fashions (including one particularly ghastly ensemble apparently made from the pelt of a dead plaid couch) to the wood-paneled house, apartment interiors and an enthusiastically cheesy music score. Fans of grade-Z action cinema can thrill to a death by speargun, one poor sap getting set on fire, several shootouts, a shower scene between Stevens and future B.J. and the Bear/Tek War star Greg Evigan and some alternately impressive and ridiculous chase scenes. Stevens, an adorable, ever-perky sorority-girl blonde, is hysterically miscast in a role that screams for an ass-kicker, but she’s never less than entertaining. And William Smith, an intense tough guy most famous for playing Conan’s tough-as-nails dad in 1982’s Conan the Barbarian, delivers the mustache-twirling goods as a heroin-trafficking, rat-bastard one-man goon squad.

Fun as it is overall, Scorchy’s Seattle locations are what make it a truly unmissable view for locals—it’s fascinating to see what’s changed, and what hasn’t, in the last 40 years. The Edgewater Inn and SeaTac Airport look much the same. The heroin smugglers test their junk in the Olde Curiosity Shoppe on the waterfront, of all places. And bygone relics like Jay Jacobs and the Kingdome appear in the periphery.

The apex of the unintended sightseeing comes with the film’s two big chase scenes. In the first, Stevens and Big Bill Smith play cat and mouse by foot, monorail, taxi, car, dune buggy and motorcycle. In the process, they tool past Pike Place Market, through Seattle Center (replete with amusement park rides!), down several downtown streets, then through SoDo and Pioneer Square before both parties take a grand leap from the Coleman Ferry Docks into the Sound. The second, climactic chase involves a helicopter pursuing a speedboat across Lake Washington, through the Montlake Cut and finally to Gasworks Park, for a finale that’d be depressingly nihilistic if it weren’t so goofily executed.

Come for the unintended laughs, action and B-movie thrills—then stay for the scenery. Or vice versa.