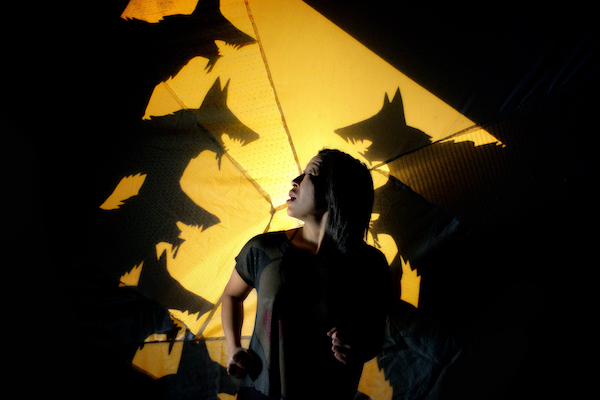 Warning! I enjoyed the stuffin’ out of this show—it was fun and frolicsome with just the perfect amount of soul-crushing darkness. But it’s crucial that you BEWARE THE SONG. The song is evil.

Scary Mary and the Nightmares Nine (written by Amy Escobar and directed by Eddie DeHais, now running at Annex Theatre) may sound like a Joan Jett cover band, but it is a marvelously quirky, sometimes intense adventure that pulls you into a shadowy and fantastical realm of unlikely characters and visual spectacles, trials, allies and mortal foes.

The lead character Mary (played with sincerity and heart by Corinne Magin) sings that evil song in the first act—a slow, mesmerizing, lightly-tripping almost nursery rhyme so insidious and creepy that it’s tortured me for days. “Push and pull, and push and pull, the nee-dle is for fix-ing…” It’s utterly unnerving.

Is she singing about a colorful needlepoint project, perhaps?  No. The song is about suicide. Cutting one’s wrists, to be precise. Mary is bravely struggling with social anxiety and depression. She has just bailed out (again) on a long-planned night out with her bestie, Nell (Kiki Abba). “I’m sorry. For being like this. I hate everything,” Mary apologizes. “I know,” Nell answers with a well-practiced and understanding flippance. “That’s why I like you!”

Once Mary is alone with her malaise and her sassy cat Alabaster (Carter Rodriquez), she begins to repair a rip in a old pair of pants. The rhythm of her sewing needle entrances her, and she begins to sing that song. “Push and pull, and push and pull…” She “accidentally” pricks her finger, sending a single drop of blood dripping down, down, through a crack in the floor, all the way to God knows where, opening a portal to perdition and awakening an ancient and unspeakable evil called the Slither. That’s when things go off the rails.

We don’t know whether Mary is dreaming or if the nightmare is real, or whether she’s still alive at all. Maybe there was something a little funny about those cookies she was eating? Whatever: She has somehow left our world and appeared in some other, stranger, meaner place. If she intends to survive it, she must endure a number of impossible challenges: the Nightmares Nine. The first Nightmare she faces is—RUN!—being chased by starving wolves. (We’ve all had that one.) The second? A cannibalistic, back-biting spider lady masquerading as a pal. (That one, too.) And so it goes. Mary is helped or hindered in her endeavours by a capable ensemble cast that each tackle several characters, sometimes as people and sometimes as puppets.

Scary Mary is fun but familiar territory. It’s influences are clear as Crystal Pepsi: The show is up to its elbows in Labyrinth (underscored by the production’s effective and innovative use of puppets) and covered head-to-Toto in Wizard of Oz. There’s more than a whiff of Alice in Wonderland (they literally go through a looking glass for goodness’ sake) and some definite nods to Buffy the Vampire Slayer. Even hints of of Lemony Snicket can be found in Scary Mary’s more melodramatic moments and lyrical dialogue.

Each of Mary’s Nightmares, when and if they are defeated, provide Mary with a crucial element for her survival if she intends to stave off the hunger of the Slither (which has a taste for her blood now and is coming for the rest of it) and return to her so-called “normal life.” But does she really want to?

At times Scary Mary struggles with its conscience, unsure whether it’s a serious examination of and metaphor for the challenges of mental illness or a lighthearted campfest bent on having a hootenanny in hell. Either way, it’s a clever, thoughtful and worthwhile production.  Just remember: BEWARE THAT DAMN EVIL SONG.

Scary Mary and the Nightmares Nine runs through March 4.