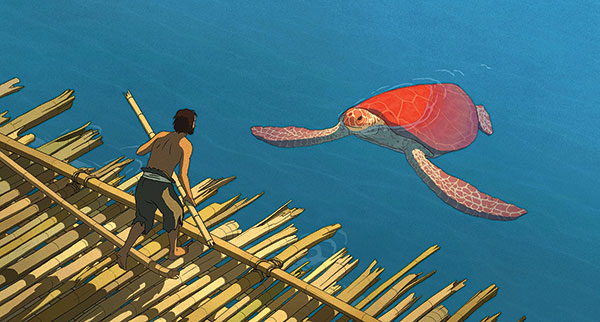 May 4
Camino
Death Proof’s Zoë Bell plays a war photographer who basically winds up in a Die Hard knockoff when she witnesses a band of South American revolutionaries engaging in war crimes. The stripped-down premise is perfect for Bell’s easy charisma and athleticism, and the movie wisely matches her up against genre filmmaker Nacho Vigalondo (Extraterrestrial, Colossal), who turns in a manic performance as the wily leader of a band of killer mercenaries.

The Red Turtle
This gorgeous Belgian animated film was co-produced by Hayao Miyazaki’s renowned Studio Ghibli. Completely dialogue free, it tells the story of a shipwrecked sailor stranded on a deserted island and the lifelong relationship he forges with a giant turtle that initially refuses to let him escape.

May 9
Things to Come
In 2016, legendary French actress Isabelle Huppert turned in not just one of the greatest performances of her career, but two of them. Her performance in Elle earned her an Academy Award nomination for Best Actress. In Mia Hansen-Love’s Things to Come, Huppert plays a philosophy professor faced with the sudden end of her long marriage. Far from a sob story about getting older or a banal tale of getting one’s groove back, this is a ruminative, subtle story of refusing to be defined by loss or grief and the richness to be found in starting over.

May 23
The Jacques Rivette Collection
Jacques Rivette was one of the pioneers of the French New Wave movement. Frequently treading the blurry lines between cinema and real life, performance and truth, reality and fantasy, his films were among the most complex and idiosyncratic of their time. This six-disc set contains three films: the long hard-to-see Duelle (une quarantaine), one of his masterpieces; its companion film Noiroît (une vengeance), which is sort of a pirate film; and Merry-Go-Round, a mysterious noir/road movie mashup.