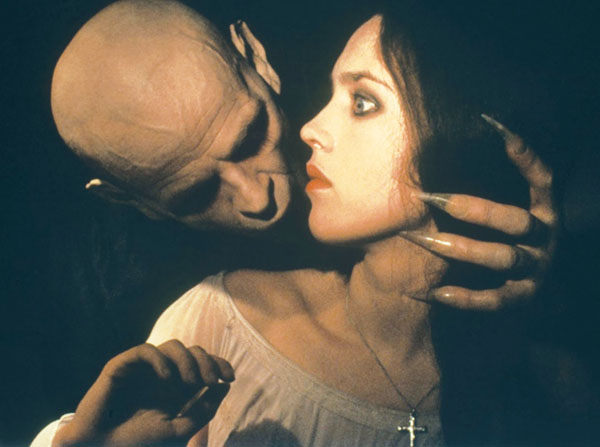 May 6
Godzilla Vs. The Smog Monster (1971)
The weirdest, wildest, coolest and most misunderstood Godzilla movie is a commentary on ecological issues made to reinvent the franchise with a more serious approach and a groovy ’70s spin. The thrilling, eye-popping monster romp about a deadly giant blob of living sewage has a lively style, incorporating cartoons and musical interludes. Hated and mocked by many, this film is overdue for a revaluation, and its anti-pollution message is still relevant. Spenser Hoyt

May 20
Nosferatu the Vampyre
Werner Herzog’s 1979 remake of the 1922 F.W. Murnau horror classic is as insane and beautiful as anything he’s ever done. Klaus Kinski stars as the eponymous vampire, capturing the tortured existence and loneliness of the undead. Scream Factory is pulling out all the stops for this Blu-ray release, providing English and German language versions, two commentaries by Herzog and more. Mark Steiner

May 27
Red River (Criterion Collection)
Howard Hawks’ first Western is considered one of the masterpieces of the genre. John Wayne, Montgomery Clift and Walter Brennan were on hand for an epic cattle drive rife with mutiny and deadly filial tension, featuring a great script by Borden Chase and stunning cinematography by Russell Harlan. Criterion offers two newly restored cuts of the film—Hawks’ preferred (and rarely seen) 127-minute theatrical cut and a longer, pre-release version, as well as the usual bounty of extras and a new paperback edition of the original novel. Mark Steiner

The Life Aquatic with Steve Zissou (Criterion Collection)
The Life Aquatic with Steve Zissou is one of Wes Anderson’s most adventurous and underrated movies. Bill Murray plays the titular Zissou, a not-as-famous-as-he-once-was naturalist, oceanographer and documentarian. His life is turned upside down by the violent death of his best friend and the appearance of a son he didn’t know he had. Jacques Cousteau references beautifully depict themes of discovery and exploration. PF