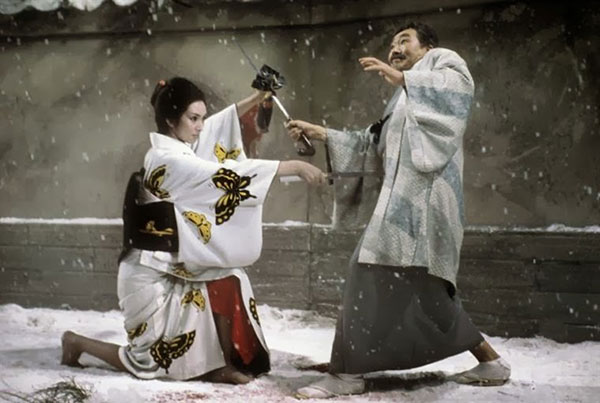 Staff at the famous video store and nonprofit archive highlight the best in this month’s new DVD and Blu-ray releases.

Jan. 5
The Complete Lady Snowblood (Criterion Collection)
Legendary Japanese genre actress and singer Meiko Kaji stars as the title character, a woman trained since childhood as an assassin and out for ruthless revenge for the murder of her family. Lady Snowblood and its sequel, Love Song of Vengeance, are gorgeously photographed vintage violence, quintessential examples of Asian action cinema and huge influences on the likes of Tarantino’s Kill Bill. –Matt Lynch

Jan. 12
Figures in a Landscape
This existential action masterpiece from Joseph Losey stars Robert Shaw and Malcolm McDowell as fugitives escaped from some unknown prison in a desolate land, chained together as they trek through the wilderness pursued by soldiers and an ominous black helicopter. Somehow the widescreen photography and open settings feel claustrophobic and forbidding, contributing to the film’s near-constant suspense. Never before available on video in the U.S. –Matt Lynch

The Knack / How I Won The War / The Bed Sitting Room
The great visual stylist Richard Lester (A Hard Day’s Night, Help!) made a trio of irreverent satires that are finally getting Blu-ray releases. The Knack follows a merry band of misogynists around swinging London as they look for romance with surreal results. How I Won the War stars John Lennon in a pitch-black, absurdist WWII comedy. The Bed Sitting Room tosses Peter Cook, Dudley Moore, Ralph Richardson and Marty Feldman into London in the aftermath of a nuclear holocaust. –Mark Steiner

Togetherness
Brett and Michelle Pierson seem to have it together—they have a house, a kid, employment—but their marriage is on the verge of collapse. Tina and Alex definitely don’t have it together and arrive at the Pierson household looking for a stable crash pad. Soon everyone under the roof finds themselves facing, and avoiding, difficult decisions. Togetherness traverses the delicate emotional landscape of a modern dysfunctional family, mixes serious laughs amid the seriousness of life.– Spenser Hoyt