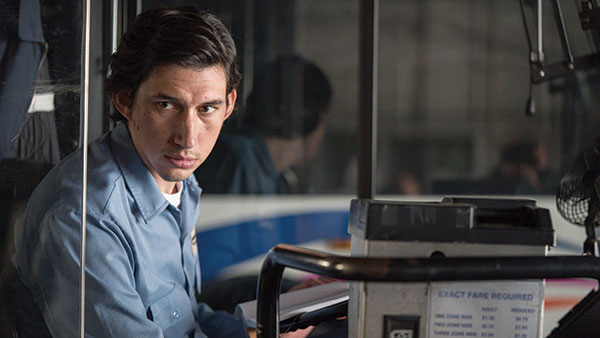 April 4
Paterson
Jim Jarmusch’s latest film may be his best in years. Adam Driver (pictured above) plays the title character, a bus driver in Paterson, New Jersey, whose true love is writing poetry. Paterson lives a simple, almost ascetic life and writes with no real desire for recognition or publication, but for the sheer pleasure of it. This is a beautiful, quiet little treasure. ML

April 4
Three
Hong Kong’s Johnnie To has been turning out multiple genre-bending masterpieces (action films and romantic comedies) every year for decades. His latest is a multifaceted thriller concerning a conflagration of cops, doctors and gangsters in a hospital. Punctuated by truly bonkers action sequences and outlandish plot twists, this is one of his best films, a symphony of shifting perspectives, best guesses, micro-accidents, and pure chance, somehow coming together with such precision as to seem like fate. ML

April 4
Invasion of the Bee Girls
When the director of Elvis: That’s The Way It Is and the writer of Star Trek II: Wrath of Khan team up, you can expect the unexpected. Biker movie legend/bad boy William Smith plays a federal agent assigned to investigate the mysterious deaths of a number of government scientists. Turns out, they’re all dying of sexual exhaustion, courtesy of a legion of mutant bee women who, uh, “sting” their victims to the brink of heart failure. MS

April 11
Never Too Young to Die
John Stamos is Lance Stargrove. He’s pretty good on the trampoline but unaware that his dad is a secret agent. Vanity is Danja Deering, a badass associate of Lance’s dad. Gene Simmons is Velvet Von Ragner, a megalomaniac with a mohawked army of leather-clad goons and plans for world domination. It’s up to Lance and Danja to save us all! This junior-James Bond disasterpiece is a must-see piece of bizarre ’80s cinema. SH