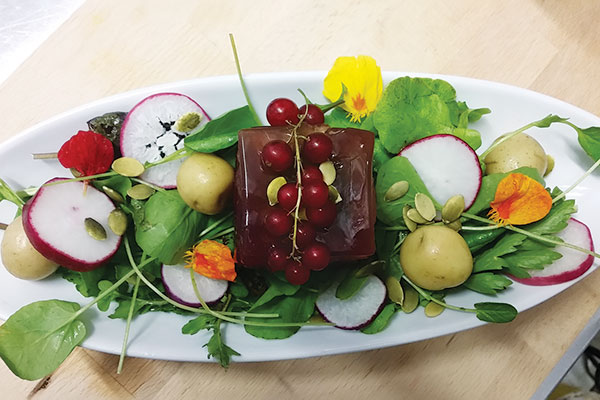 Consider the tagline “Scandinavian immigrant cuisine of the Skagit Valley.” That’s how Lexi, the first-name-only owner of Old Ballard Liquor Co., describes the style of her tiny new café and tasting room. The phrase is dramatically specific. But in the hands of Lexi and her squad, it opens a door into a way of thinking—and cooking—that spans continents and generations, embracing practices that are both age-old and of the moment. The food they serve has all been pickled, brined, cold-smoked or otherwise preserved, exquisitely plated and served cold. Most of it takes up to two weeks to prepare, the original slow food.

Lexi launched OBLC four years ago in an industrial zone on Shilshole Ave., next door to a welding shop and a block from the ship canal. This is deep Ballard, a world away from the storefronts of Ballard Ave. and the condos of Market Street. The place is tiny, even for a nano-distillery, and OBLC’s production capacity is limited to a washing-machine-sized brass still, 27 gallons of liquor—aquavit, brandy, vodka and a wonderful specialty liqueur called cherry bounce—per batch. In June, they added one large, oval-shaped dining table on loan from Tom Douglas and called it a café.

Café, kitchen bar and distillery—all within 750 square feet. Like so much European design, the space makes a virtue of economy. You’re essentially sitting alongside distiller Jane Frazee and chef Justin Newstrum as they go about their work. Following her forebears, Lexi is not only making due with limited resources, she’s thriving.

A fifth-generation Washingtonian with family roots across Europe, Lexi was among the first of her clan to relocate to the city from the Skagit Valley. Growing up in the ’70s, she spent weekends visiting her grandparents in Stanwood. They were an old-school farming family that foraged, caught or raised almost everything they ate. She recalls a typical weekend dinner at her grandparents’ house: “My grandpa would take the boat out and catch a cod and I’d pick nettles in the vacant lot across the street and mom would harvest greens and salad from the garden. Grandma would bake up some biscuits. The whole meal would cost maybe $1.50 for flour.”

A region’s cuisine is its poor food, she says. Whatever’s found for free and cooked at home. The Puget Sound is a goldmine for this stuff—fresh fish and shellfish, dozens of species of edible mushrooms and greens, all available pretty much at your doorstep. But Seattle restaurants tend to stick to a short list of foraged items, fetishized by diners willing to pay top dollar for the prestige of “local, sustainable.”

“We’re only two generations away from living off the land and yet we’ve completely forgotten all that knowledge,” she says. “Think about all the dishes families would share, all the different ways you find to cook the same thing. Multiply that by all the forageable things you can get around here and you have this rich, dynamic cuisine that’s informed by the immigrant cuisine that came in two, three generations ago.”

Newstrum is president of FORKS NW, a nonprofit stewardship organization that educates chefs on sustainable sourcing practices. He works closely with Lexi to develop OBLC’s menu, which leans heavily on herring, a Scandinavian staple food that also happens to be among the world’s most flavorful and sustainable fishes. 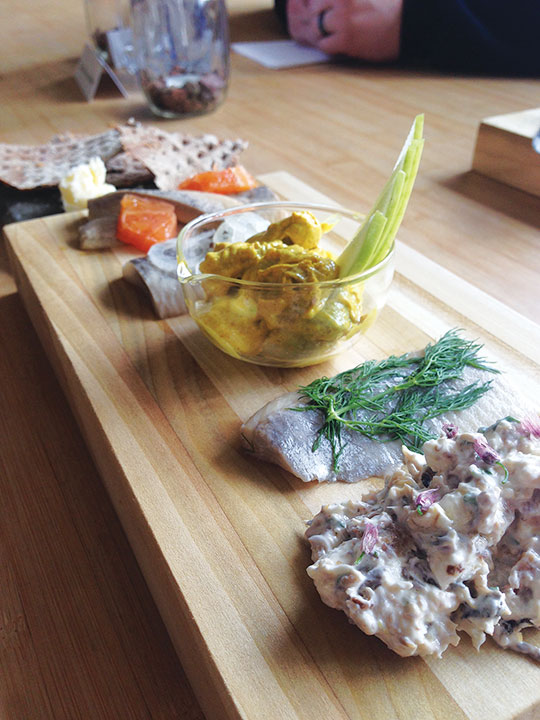 When I visited on a lazy summer Sunday, my friend and I were the only ones in the place. Frazee and Newstrum were busy sampling new aquavit cocktail recipes. Frazee plied us with robust, savory aquavits served neat—Washington law limits their license to four half-ounce samples per person per day—including a sharp, refreshing citrus, a rye-bready caraway and an aromatic dill.

Each of these flavors danced with Newstrum’s lamb tartar, which was earthy and herbal and delicately kissed with smoke. The “herring bord” came with five different house-made varieties. Our favorites were Newstrum’s modernist, seasonal variations—creamy horseradish-cumin and lemon-rosemary. The palm-sized filets offered luscious, salt-cured density and the flavors were bright and enchanting. Everything was served with a traditional whole-grain Swedish cracker, robust and nutty, plus house-churned butter.

As an untapped, Seattle-ready dining concept, the whole experience felt new and joyfully adventurous. Also easygoing—the folks at OBLC know this kind of food might be traditional for some, but to the rest of us it’s a discovery waiting to happen.