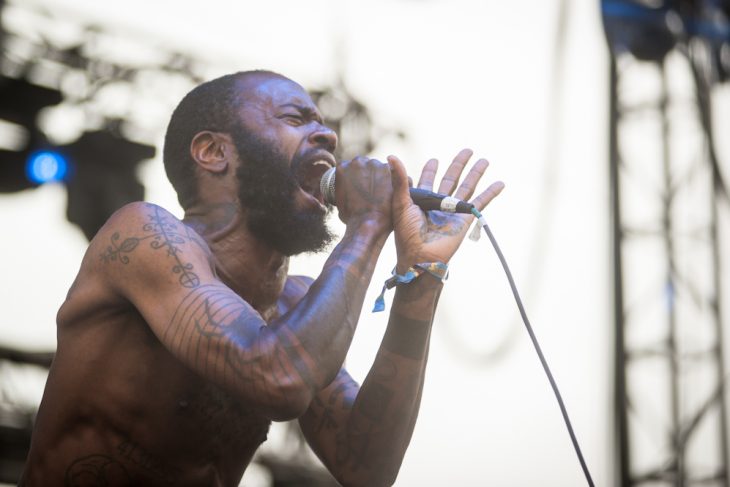 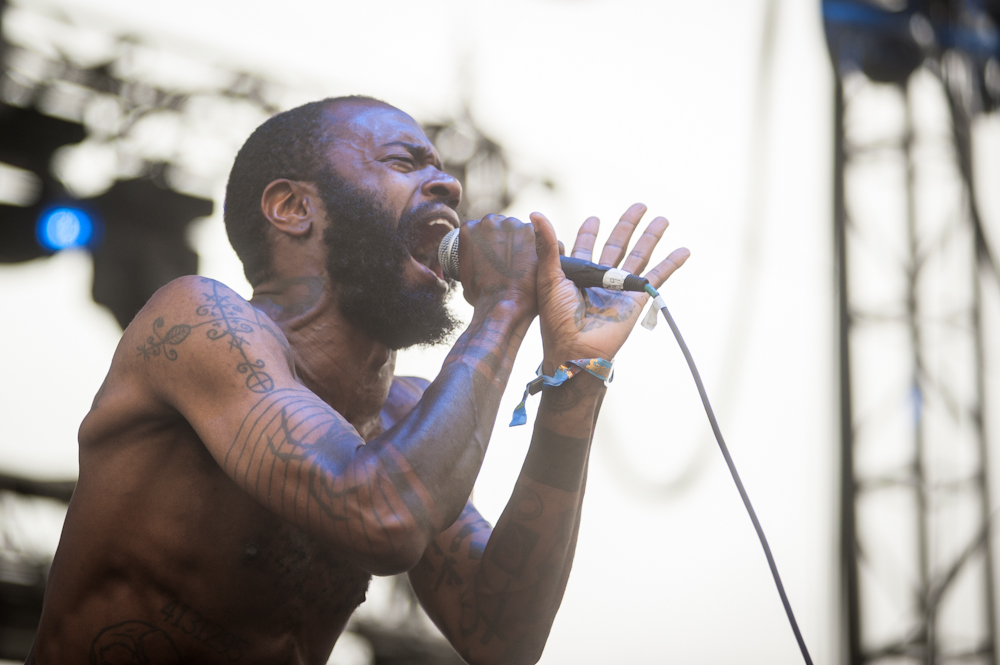 This final installment of Sasquatch coverage is brought to you in part by Tacos Chalito in Ellensbug, WA. After three days of eating peanut butter sandwiches instead of paying for festival food, their delicious tacos may have saved my life.

Soul singer Cody Chestnutt’s set was the first attempt I’d seen by an artist this weekend to “take the crowd to church,” so to speak. His songs spoke of redemption from trying times, going from smoking crack to teaching Sunday school, with refrains such as, “No turning back” that ultimately fell flat when the singer tried to get the crowd to sing along (wet people don’t like singing along, apparently). Chestnutt shined brightest when spotlighting his own voice, which was rich with emotion and experience. Standing on a riser in the rain with the crowd, Chestnutt ended his set by dedicating a song to his wife of 17 years. 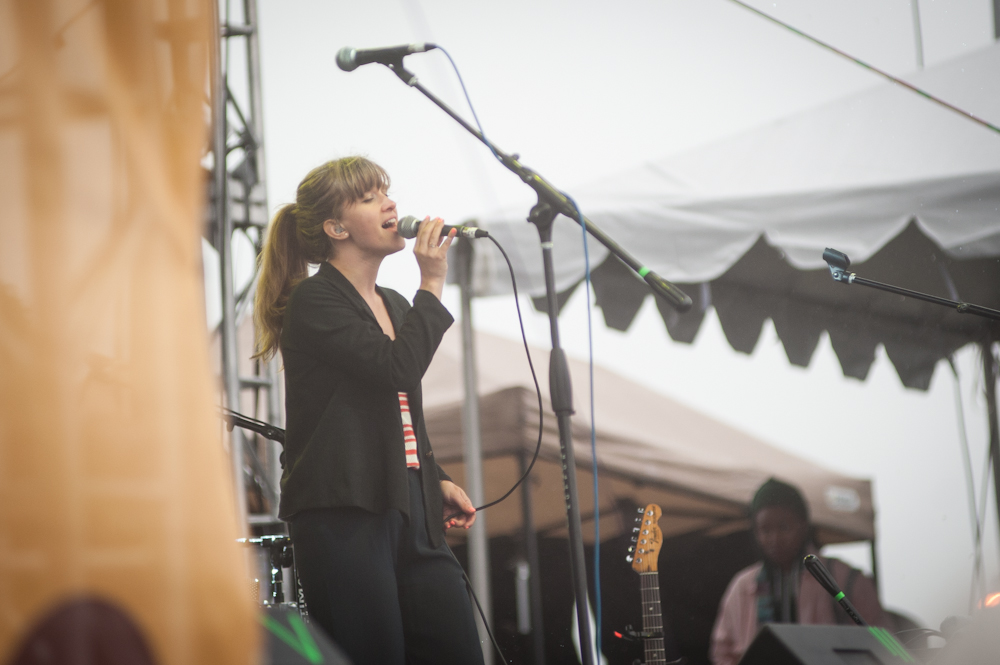 By the time Dirty Projectors took the stage, the rain was miserable and the crowd was thin. No one composes songs quite like Dirty Projectors, and their command of the human voice is staggering. Their three-part female/one-part male vocal interplay is unique, harmonizing with inhuman-sounding trills and pitch bends. Their songs weren’t the most accessible of the festival, but they were some of the most intricate. Their set was so flawlessly executed that it was worth getting soaked for.

At this point in the day I would have really enjoyed watching Azealia Banks, but she canceled. In my imagination, she didn’t want to “sing for no soggy motherfuckers in a field,” but as of now an actual reason has not been given for her dropping out of the festival.

On Sunday, I didn’t feel like getting yelled at by El-P on such a sunny day, so I went elsewhere. The vibe on Monday was drearier, and a part of me hoped that Death Grips (pictured at top) savagely yelling at a bunch of wet people was going to start a Woodstock ’99-style mud riot. I was excited to be yelled at, because when Stefan “MC Ride” Burnett is yelling, you actually feel afraid.

Death Grips is the musical equivalent of being accosted by an agitated paranoid schizophrenic in a bus stop. MC Ride is a frightening, angry man, and backed by an impenetrable barrage of blast beats, screeches and bleeps, Death Grips kept the crowd uncomfortable and off-kilter every moment of their set. Their performance began with MC Ride and DJ Flatlander taking the stage in hooded black raincoats, the stage volume seemingly too quiet. As the first song progressed, Ride gestured to the sound guy on the side of the stage to turn his mic up, and when nothing happened he did it again a few moments later, and then again. By the end of the song Ride was staring at the sound guy menacingly, and as the music stopped he dropped the mic with a thud and charged off the stage. Several minutes passed, and the audience could only assume someone was getting a very loud talking-to. When Death Grips returned, MC Ride was shirtless, the volume was massive, and the audio berating began, no one quite sure if they just saw a sound check or a meltdown.

Toro Y Moi gained a lot of fans Monday thanks to the rainy weather. Their indoor set in the Chupacabra Tent was packed, with great sound from the closed-in stage set up to showcase electronic artists. Though the vocals were shaky and off key at times, the full-band incarnation of Toro Y Moi superbly blended live instrumentation and electric components, deftly combining ‘70s soft rock, disco and soul grooves.

A decade after its release, the Postal Service’s Give Up still holds significant sentimental value for a lot of people. Though the combination of electronic music and indie singer/songwriting is now commonplace, the Postal Service were one of the first acts to successfully bridge that gap. They didn’t play live that often, and they never made a follow-up album, with singer Ben Gibbard focusing instead on his band Death Cab for Cutie. Though the project dissolved, Give Up became a benchmark record of the early 2000s, and only the second Sub Pop record to go platinum after Nirvana’s Bleach. Ten years later, the demand was clearly still there for the Postal Service to reunite, and though the Monday crowd was culled by inclement weather and impending drives home, a loyal and sizable crowd remained to see their set.

Time and hindsight have given the Postal Service the ability to really flesh out their songs, adding live instrumentation and vocal interplay to their limited catalog. Jenny Lewis and Ben Gibbard’s vocals paired wonderfully, with Lewis adding backups to most songs that originally only featured Gibbard. A second female vocalist, Mynabirds singer/songwriter Laura Burhenn, further enhanced the spectrum (Jen Wood is confirmed to perform with the band in Seattle in July). With Gibbard and Lewis taking turns on the live drum kit and adding feedbacky guitar solos, the band sounded more alive than it ever did on record. With only one proper album to draw from, they included lesser-known B-sides “Be Still My Heart” and “There’s Never Enough Time,” new songs “A Tattered Line of String” and “Turn Around,” as well as their own interpretation of Beat Happening’s “Our Secret.” The rain had subsided and the crowd on the floor was ecstatic, with virtually everyone singing along in a shared nostalgic bliss.

It was a fine way to end a weekend full of great music, but I wish the bookers of Sasquatch would wrap up the final night earlier. The festival begins with a half-day on Friday to allow for travel; why not give the same consideration for the end? The Gorge is a long drive from anywhere, and not having the final set finish until well past 11pm not only sends home some fans early without seeing an artist they like but also puts a lot of tired people on the road until the early hours of the morning. As a Postal Service fan and commuter who arrived back in Seattle at 2 am so I could go to work the next day, I know I would have really appreciated a headlining set that ended an hour or two earlier.