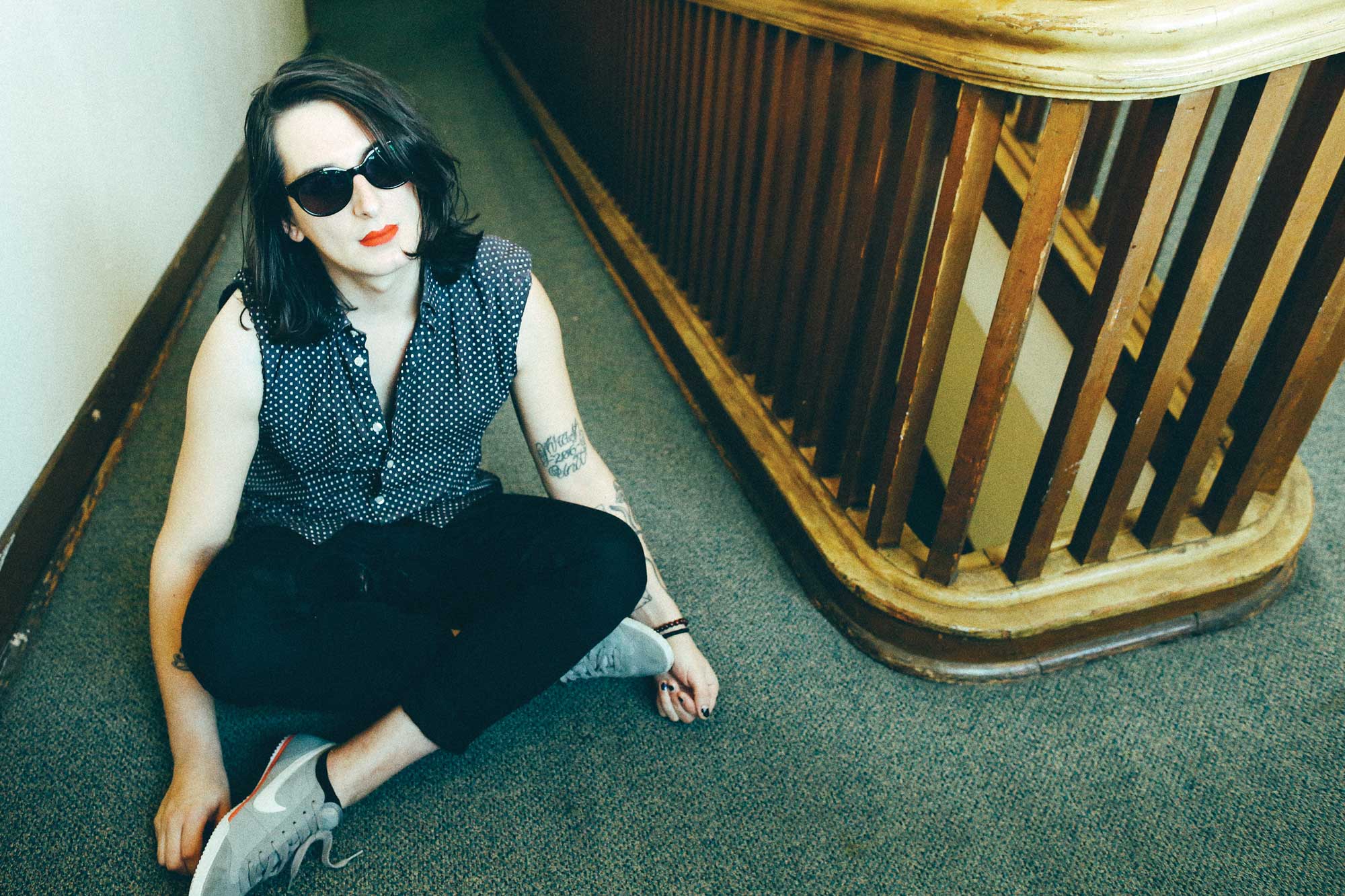 One year ago, as much of the nation recoiled under the Trump Administration’s harrowing transition to power, Sasha Bolof decided she wanted to make a political statement with her music. The singer-songwriter-multi-instrumentalist, newly out as trans, was falling in love with a woman as a woman for the first time. But while she floated in the fervor of new and previously unthinkable romantic possibilities, everyone around her was angry, caught in the grips of the grim national circumstances unfolding. Bolof considered what kind of political statement she could make under her long-running musical project, Stres, to bridge those two divergent realities.

“It was love, because love is universal and revolutionary,” she says. “A trans woman in love—what’s more radical than that?”

The result was a nine-minute song, “She/Her Me/You,” produced alone in her apartment and released last February on Bandcamp. The song is a magisterial march through steadily shifting terrain, a musical adaptation of Bolof’s journey with suggestions of slowcore and post-rock. Her heavily processed, distant voice intones, “Give me love/Give me shelter/And give me peace” over a triptych of melodic movements in guitar, synth and drum machine that morph from insistent to sinuous to haltingly expectant. It was the first piece of music she recorded as an out trans woman. This year, Yellow Year Records will re-release a remixed and remastered “She/Her Me/You” as a digital EP.

Last month, Bolof legally changed her name to Sasha. Her features and mannerisms have softened. She’s ramped up her daily dose of hormone pills and she’s undergone laser facial hair removal—a birthday gift from a trans friend. Lately, straight cis men have begun hitting on her at bars. (“It’s really bizarre,” she says.) The milestones have come fast over the past year.

One constant that remains is Stres, a musical identity that, for Bolof, exists somewhere beyond gender; it’s a concentration of specific personal qualities aspiring to the universal. She thinks of Stres as another name for Sasha, but it also represents a more knowing part of herself, one that’s made a home in both confusion and certainty. Stres is Bolof’s attempt to be as truthful as she can with her music—even when that truth has eluded her.

The transition to womanhood has illuminated her purpose and given Bolof insight into the music she recorded previously. “I’m not a new person, I’m just more honest,” she says. “With Stres, from the beginning, I wanted to carve out something that resembled me. It makes more sense now: Here’s this trans woman making this slightly ethereal, slightly sad, pretty music. That makes sense.”

Knowing what she knows now, Bolof returns to past recordings to discern messages from that deeper, truer self. She points to a lyric from the song “Ivy” off the Erik Blood-produced 2013 EP Old Lives, in which she repeatedly chants, “I’ll remain strained if it’s all undercover.”

“You could look through a trans lens and make the argument that I was talking about trans stuff,” she says. “I knew something was up, something was wrong with me. I just didn’t know what.”

With her shift in outward identification—and the hormones that come with it—she’s approaching a new level of clarity and immediacy in her art. “It felt like my emotions were trapped behind a glass that’s been smeared with Vicks VapoRub. It was super blurry; you can still see they’re there but it’s hard to access them. When I started taking hormones I could feel that barrier was gone,” she says. “When I write music I’ll usually go off a visceral reaction to a melody. Now that my emotions are a lot more accessible and potent, it happens more immediately. It’s more effortless and I don’t question it as much as I used to.”

Bolof’s long journey to this current moment of lucidity began when she was eight and saw a commercial on the TV Guide channel for the movie Dr. Jekyll and Ms. Hyde, a 1995 comedy starring Sean Young and Tim Daly in which a perfumer imbibes a formula that transforms him into a power-hungry nymphomaniac woman. Bolof had always struggled with perplexing feelings of femininity—as a young child she preferred to hang out with girls, learning to braid hair—and this campy film awakened her to the possibility of gender nonconformity. As a teen, Bolof’s idea of porn was The L Word, which she’d watch while fantasizing about being one of the characters on the show. She’d compulsively try on women’s clothes in department stores at the Lake Forest Park mall near the North Seattle suburban neighborhood where she grew up. Once in seventh grade she put on her mom’s clothes and makeup and biked to the nearby McDonald’s just to use the women’s restroom.

“No one ever told me to do it. I didn’t know why I was doing it,” she says. “I didn’t tell a fucking soul until I came out a year ago. Then I told my trans friends and they were like, ‘Uh, yeah.’”

Bolof’s gender confusion was compounded by her attraction to women, which ruled out the possibility that she was simply a gay cis male. Growing up in a religious family, any thoughts or expressions of queerness were fraught with feelings of guilt and shame. When her twin brother discovered she’d been wearing their mom’s pantyhose, it was immediately dismissed and suppressed within the family.

“It was a dirty, perverse, bad, gross, sinful secret that I had,” she says.

Bolof maintained a file cabinet in her brain of every cultural reference to gender nonconformity, including schlock like Dr. Jekyll and Ms. Hyde and the 1985 comedy Just One of the Guys, a loose adaptation of Shakespeare’s Twelfth Night in which a high school girl masquerades as a boy to advance her journalism career. In adolescence those preoccupations turned musical and Bolof was drawn to queer feminist art punk like Gossip, Shoplifting, Tracy + the Plastics, Tegan and Sara and other bands she was exposed to through the Old Fire House Teen Center in Redmond. At 14 she fronted her first punk band, emulating the voice of the Dead Kennedys’ Jello Biafra, then later Green Day’s Billie Joe Armstrong.

She went on to play guitar and sing in a series of bands that skirted the anti-commercial fringes of the punk genre: a post-hardcore band, a powerviolence duo, a post-rock band, a dance-punk band in which she played keys, vocoder and tambourine. She also absorbed influences from ’90s trip-hop groups like Massive Attack and Portishead, to which she attributes the “somber but pretty” sound that her current output exemplifies.

In 2007 Bolof began playing under the name Stres, and she’s released three albums under that moniker: Detonator (2009), AlgoRhythms (2011) and Old Lives (2013). Stres’s angular, percussive early work has given way to a sound that’s more florid and melodic.

“Being onstage in this big, dark cloak and red lipstick and sunglasses, it was so overwhelmingly liberating. It was home.”

Throughout her musical development, her gender identity remained a persistent, anxious obscurity, and she continued to pursue relationships with women as a man. In 2012, the lead singer of Gainesville, Fla., punk band Against Me!, Laura Jane Grace, came out as a trans woman, and it had a major impact on Bolof even as she still failed to grasp the truth of her own situation.

“When she came out I was super stoked,” Bolof says. “I wanted to do it too but I wasn’t conscious of [my own trans identity at the time], I just knew that what she did was inspiring.”

Bolof finally realized she was trans in the summer of 2016 and came out to her close friends soon after. She made her identity public with the release of “She/Her Me/You.” The response from her community has been overwhelmingly positive, to the point where she’s experienced survivor’s guilt for those who must undergo the same change without a supportive network of queer friends, like the trans woman who mentored Bolof through the process and continues to provide her with hormones bought online with Bitcoin.

She still grapples with feelings typical to the newly transitioned: internalized transphobia, self-hatred and the realization that toxic masculinity lurks within her like a cancer after being socialized as a man for so much of her life. She’s single and broke and learning to be comfortable in her body at 30 years old.

“What made it really hard initially is the fear of not being loved. That’s enough to keep you in the closet. Gay women aren’t going to be attracted to a trans woman, that’s fucking crazy! I didn’t even know what I’d look like when I transitioned—can I even pass? Am I gonna just be a freak?”

Just over two months after she released “She/Her Me/You” Bolof played at Barboza on a bill with Dirty Sidewalks and Golden Gardens. It was the first time she’d ever performed as an outwardly presenting woman.

“That was the best show I’ve ever played. It was everything,” she says. “It was the first time I was being my authentic self. Playing music has always been the only place I could be fully present, and then being onstage in this big, dark cloak and red lipstick and sunglasses, it was so overwhelmingly liberating. It was home. And I think it resonated. I think people felt it.”

Next up is the release of a full-length album she’s been working on since 2014, sea//grams. It includes performances by Erik Blood, Irene Barber, Gabi Page-Fort and Aaron Walters, a multi-instrumentalist with whom she’s collaborated for the past five years. This album predates Bolof’s dawning realization of her trans identity and, now that she’s out, traverses the two phases of her life, affirming Stres as a creative entity that exceeds the gender binary and strives for the essential, the universal.

sea//grams was slated to be Stres’s next release until Bolof took a sudden detour to discover the nature of her true self. “She/Her Me/You” was both a chronicle and an announcement of that discovery. Now Bolof returns to the work that’s encompassed the essential parts of her identity since before she even knew what that was. She says the new album is 82 percent complete—all that’s left to do is record her vocals.

“That record will come out when it comes out,” Bolof says. A great and troubling personal mystery has finally been solved, and she’s in no hurry. “It’s kinda serendipitous that it didn’t come out when I planned it to, because I needed to come out first.”