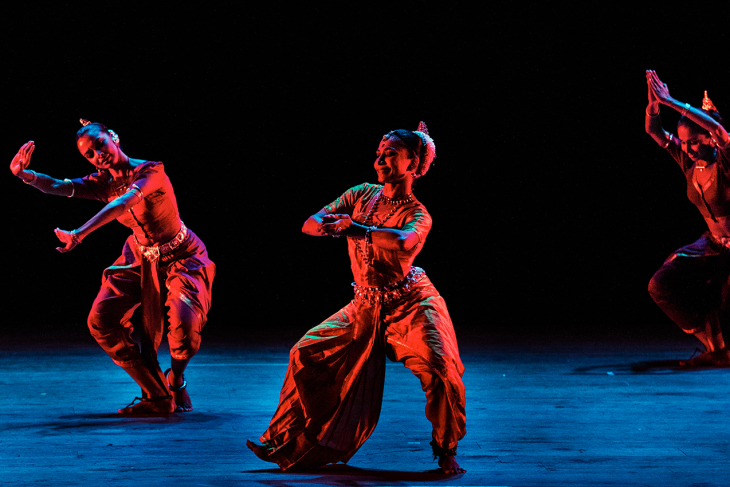 It’s a dancer’s dream: The Nrityagram Dance Ensemble is a group of artists in southern India who live communally in a women’s village devoted to dance. The company makes its Meany debut performing Odissi, a form of ancient Indian classical dance that brings to life stories of Hindu epics through rhythmic, curving movements and bold choreography. With guest artists from Sri Lanka’s Chitrasena Dance Company, Nrityagram Dance Ensemble will present Samhara, a collaborative work performed by five dancers and five musicians that creates a dialogue between the dance styles of India and Sri Lanka.

Solo: A Festival of Dance

One of the most fundamental segments of a dance performance—often saved for those perceived to have the most talent—the solo is an aspirational piece of choreography that highlights the skill and nuance of a single artist. Solo: A Festival of Dance brings the meaning of the solo, and the definition of dance as a larger medium, into question. This festival showcases both local and national choreographers in a series of live performances, opening up the space to a conversation about the future evolution of dance and performance.

Against the Grain/Men in Dance

One of Seattle’s top showcases for choreographic talent, Against the Grain/Men in Dance highlights and celebrates the skill and athleticism of male-identifying dance artists. The second weekend of this annual event returns to Capitol Hill with a range of dance makers both male and female creating works that span genres from classical ballet to modern dance and interpretive work. Choreographers include Seattle-based Sam Picart, Gerard Theoret and Deborah Wolf as well as visiting artists from California, Arizona, Texas and Utah.

Embracing the nuances of character development and display of emotion, dancer-choreographer Beth Terwilleger taps into one of the greatest storytellers of all time in her new work, The Midsummer. Based on the four lovers and the feisty, supernatural sprite Puck from Shakespeare’s A Midsummer Night’s Dream, Terwilleger’s The Midsummer isn’t all comedy and laughter. Instead it explores the potential emotional and psychological development that each character might’ve experienced if he or she approached life without inhibitions.

Lily [bloom in my darkness] and LUNG

Choreographer Karin Stevens and composer-sound artist Kaley Lane Eaton mount two works at the Erickson Theatre: a reproduction of the award-winning Lily [bloom in my darkness] and the premiere of LUNG. Both works deal with themes of migration, connection and finding one’s voice. Lily is a 35-minute electroacoustic opera exploring the psyche of an orphan fleeing England at the start of WWI and LUNG is an interactive collaborative work featuring loudspeakers laid out as a room-sized version of a respiratory system.