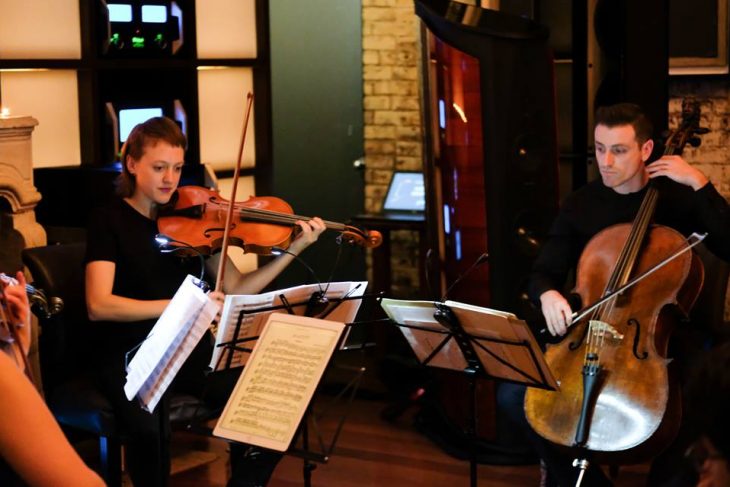 Classical house shows have been popping up all over Seattle in recent years, providing classical music lovers and newcomers alike an intimate, inexpensive alternative to the concert hall. While Bach, Beethoven and Brahms in a basement may sound like a novel idea at first, the concept of classical house concerts is not so new at all.

The tradition of salon concerts dates back to Romantic-era Europe, where high society women entertained guests with small chamber concerts in their drawing rooms. “Salons were places where people not only played music, but discussed art, culture, aesthetics, politics and issues of social concern,” says harpsichordist and pianist Byron Schenkman. “The salons were places to see and be seen, but also places where a lot of cultural change actually happened without people realizing it, because it was in the privacy of people’s living rooms.”

Schenkman has performed in a number of living rooms around Seattle, including concerts that raised funds for causes such as gun reform and marriage equality. Although classical house concerts are not always political in nature, they can serve as a catalyst for meaningful conversation.

“Music opens people’s hearts, it allows people to connect with deeper parts of themselves and it also provides a shared experience,” Schenkman says. “I think of music as a healing art, and the job of the musician is to bring people together and to help people connect with themselves and their community.”

By bringing in younger audiences and newcomers to classical music, living room shows expand and intensify that sense of community. Lower ticket prices and a more casual, BYOB social atmosphere make house shows a welcoming entry point for those intimidated by the formality of classical concert etiquette—and the organic nature of house concerts can lend itself to spontaneity and innovation. Depending on the age and backgrounds of the presenters, living room shows can take on different forms ranging from an intimate concert on the couch to a refined wine and cheese night, or even a classical college house party.

Double bassist Abbey Blackwell’s brand of house shows stretches the confines of the classical concert tradition. A graduate of the University of Washington School of Music, she first started performing in house shows with friends and former classmates studying classical or jazz music at UW and Cornish College of the Arts. A house concert she put on in her backyard last summer featured performances ranging from Schumann’s Dichterliebe on marimba and guitar to a Bach Cello Suite on double bass, and the event brought together musicians and audience members from all areas of the Seattle music scene.

“When you go to a rock show, the rock scene is fairly tight-knit and you’re going to see a lot of the same people going to every show,” Blackwell says. “I think that the classical chamber scene should be more like that, and I want to play a role in creating that scene and opening it up to more people.”

But one of the common challenges with the underground nature of house shows is that you have to already be in the scene in order to know about them. Groupmuse makes it so you no longer have to “know someone” to get the invite. Founded in Boston in 2013, the online platform connects classical musicians with living room hosts and local audiences in 11 cities throughout the U.S., including Seattle.

Growing up outside of Boston, founder Sam Bodkin’s introduction to classical house concerts came as an audience member rather than a performer. He first fell in love with classical music at the age of 19, while listening to his neighbor practice cello.

“He was working on a late Beethoven string quartet, and I had never seriously listened to classical music before but it just blew my mind,” Bodkin says. “I became basically an overnight evangelist.”

Though not a musician himself, his experience attending house concerts with students from the New England Conservatory combined with his experiences couch surfing through Europe led him to create Groupmuse. “It’s a way not only that new listeners get acquainted with the art form, but a way that community members become acquainted with each other,” Bodkin says.

Classical house concerts are particularly at home in Seattle, where audiences tend to be laid back, locally focused, open minded and tech savvy. And on a cold, rainy night in Seattle, there are few places warmer than the living room.

“The living room is one of the few spaces in society that has really stayed personal—it hasn’t become overly commercialized or corporate,” Bodkin says. “People live their personalities onto the wall with the art that they hang, the type of upholstery on the sofa. It creates this sense of human immediacy and it’s really not transactional—it’s celebratory.”