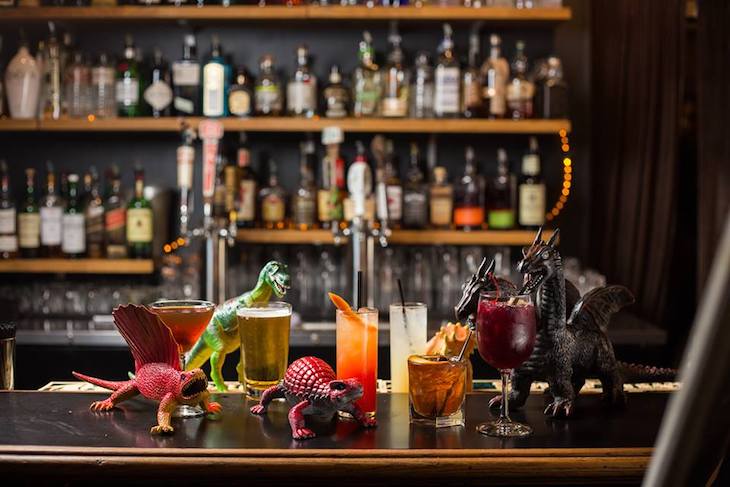 Decor is crucial to the quality of a restaurant. Food, service, lighting, location, cleanliness and clientele matter a lot, but what’s on the walls has a lot to say about what a place is all about. Its character, if you will. Some of the fanciest, most rarefied restaurants lack character and some of the most random, linoleum-lined teriyaki joints have it. Like pornography, you know it when you see it.

Saint John’s, that bright, airy refuge from Capitol Hill’s nightlife crowd, has a lot of it. Chef Joe Randazzo’s food is some of the most quietly delicious fare in the neighborhood, but they could serve Hot Pockets and Gallo for $5 and I’d still want to hang out there. Thankfully they have an underrated burger and their house red is Sagelands’ Cab Sauv, the dependable workhorse of the fundraising gala circuit.

Saint John’s also has Enchanted Dinosaur FantasyLand. This menagerie of plastic dinosaur figurines—the collection of co-owner and rock ‘n’ roller Michael Lee—covers almost the entire back terrace, and it tells you a lot about the nature of the place: Of course a restaurant full of toy dinosaurs is gonna be popular with Capitol Hill’s last remaining queer, arts and industry folk. The place recently added a dino-themed mural by Craig Cundiff that covers the entire south wall of the dining room. That’s commitment. We figured it was a good time to sit down for a drink with Lee and ask about all the dinosaurs.

Michael Lee: Well, I’ve always had a thing for them since I was a little kid. There were moments where it ebbed and flowed a bit when I was focusing on being a young adult or something. But I used to draw them, used to collect them—that somehow bled into my 30s.

City Arts: Are some of the figurines from your childhood collection?
Some of them actually are. Some of the old Masters of the Universe stuff is from my childhood. But we got most of them originally from the Value Village on 11th. That was a total cash cow for that. Obviously [the store] went away, so we went to Dearborn Goodwill. I’m always looking for them.

So you thrifted basically the entire museum?
Oh yeah, for sure. And been gifted. As it’s grown, people have come in like, I have this dinosaur, it needs to be here!

Has it been around since you opened the bar?
We opened in 2012, and I think I started beginning the curation about five years ago. So yeah, it’s been a slow drift.

How many figurines do you have?
Definitely several hundred. I know people are taking them, too. Just little ones, and I can’t get too sore about them, because it’s like they want a piece of it. I’m not actively encouraging dinosaur theft though!

Who does that!? Anyway, you recently cleaned the museum. How tedious was that?
Really tedious! You get up there and first you have to collect all the dinosaurs and move them. We’ve got that big tree in the back and it’s dropping leaves on them. Then you get out the leaf blower and blow all that off, which blows all those leaves back into the patio area. Then you reset the dinos, sweep up the leaves and pressure wash the patio itself. That was about a six-hour day. Before tending bar, so really it was a 17-hour day.

The things you do for dinosaurs. I’m guessing the new mural was inspired by the collection out back?
Lila, who works here with me, we were having a drink and sort of laughing about how insane it would be to have this dinosaur hellscape on the wall. Like, you look over and see somebody enjoying a tuna melt and there’s two brontosauruses humping and another one screaming at you.

And death by fire on the other end.
Yup, the apocalyptic component at the end. And those guys over there [gestures at a second pair of copulating dinosaurs] are arguably in their final carnal embrace.

Oh wow, you’ve got multiple brontosauruses having sex.
Or brachiosaurs, it’s unclear which is which.