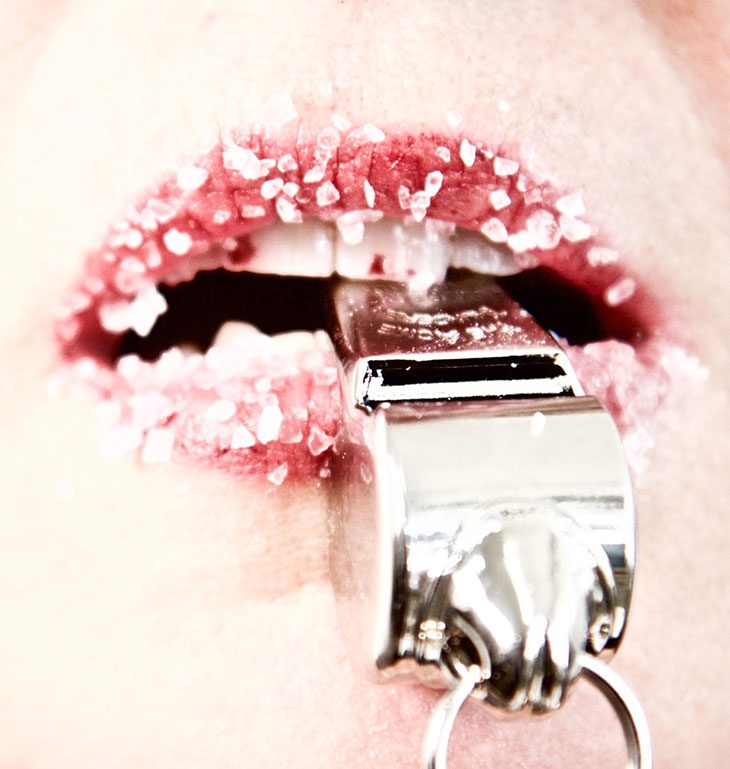 On the giant wooden stairs of Oxbow Gallery, some 20 stiletto-heeled shoes are embellished with collages of cocktail umbrellas, bright feathers, fishnets and rose petals. On a white-and-pink painted pump, antlers branch over the words trophy wife. A yellow heel joins it, shriveled under the force of numerous rubber bands.

The women who left these shoes are survivors of prostitution. Over the past 11 months, they created the artworks alongside multidisciplinary artist Michelle de la Vega, who led the workshops in conjunction with Seattle-based Organization for Prostitution Survivors. This “healing service,” as de la Vega calls it, is part of her extensive, ongoing art endeavor called The Sugar Project, parts of which are currently on display at both Oxbow and Bridge Productions in Georgetown. For de la Vega, sugar is a metaphor threaded through the project to express the commodification of women and the idea that women are expected to be sweet and sexy and not too sassy—while simultaneously open to blame for being too sexy when it suits the narrative. 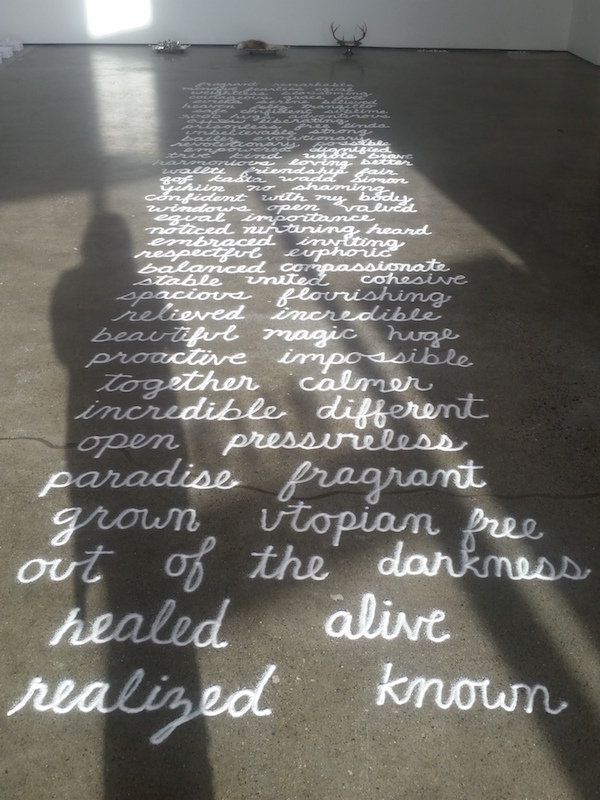 A pile of stilettos de la Vega made from spun sugar, dipped in granulated sugar, merges the metaphors: Women mold ourselves and our feet into the narrow construct of the patriarchy, often at the cost of literally making ourselves bleed. But high heels also represent empowerment, and the dual sugar image contains this confusion. Their color—a semi-transparent beige, the color of parchment paper and panty hose—adds another layer. The pumps appear molded from honey but even their sparkling sugary tops fail to make them appear edible. Sugarcoating, they suggest, won’t help. In a patriarchal society, past a certain age, “sexy woman” morphs from an obligation into a contradiction in terms.

With The Sugar Project, de la Vega reclaims labels that’ve been defined by men for too long. In doing so, she asked women and young girls to imagine what the world would be like if there were no more gender violence, if prostitution and patriarchy didn’t exist. During numerous performances, she “sugar-painted” the concepts that emerged from these conversations, piping frosting directly onto the ground with a frosting bag. At Oxbow, visitors tiptoe around the now-crystalized lines of sugar words: Embracing, magic, calmer, healed. Some words betrayed a certain skepticism, embodying a less hopeful message: utopian and incredible. For many, a future without misogyny is unfathomable.

More shocking sugar phrases creep up to the walls—choker, trophy wife, titles associated with the crisp photo prints above, featuring women wearing thorny chokers made of whistles, women carrying a trophy, a muzzle. Both the imagery and the sharp, glitzy style are too literal to stick, and seem out of style for de la Vega. Maybe it’s an intentional appropriation of the glossiness of advertising photography reigned by the male gaze, but this critique is lost in the one-dimensionality of the gloss.

This feeling lingers differently in the strongest photo in the series, titled “Her Sweet Words.” It’s an extreme close-up of lips, perhaps belonging to an older woman, frosted with granules of sugar. A first look reveals a literal sugar mouth. On second look, there are noticeable flecks of blood or traces of lipstick on the teeth. The more intently one gazes, the more the sugar looks like grains of salt. Like rubbing salt in a wound, the image keeps prickling.

Returning to the sugary words on the ground, something seems amiss, the language too utopian, dismissive of the real, ongoing insults and infantilizing language from online trolls. But de la Vega wants to recoup the narrative. She balances out the violence in the surrounding sculptures, made with anonymous sexual-assault kits acquired at local hospitals. She adorned a clean-looking metal cake sculpture with cotton swabs, a paper ruler, pieces of paper reading Did perpetrator ejaculate? Vaginal penetration? and Outer clothing. It’s difficult to read. Hard and cold, like the metal—a chilling, clinical documentation of the burden carried by survivors.

The sexual assault kits return in a series on the floor. This time they’re sealed shut, denying the viewer a peek at the trauma, perhaps implying that we couldn’t grasp it anyway. In its entirety, the line of boxes invokes imagery of the cool, boxy Donald Judd sculptures I was flooded with as an art history student. With the shocking subjects of her cold minimalism, de la Vega, a female artist of color, reminds us how much of art and art history is framed by the white male narrative. 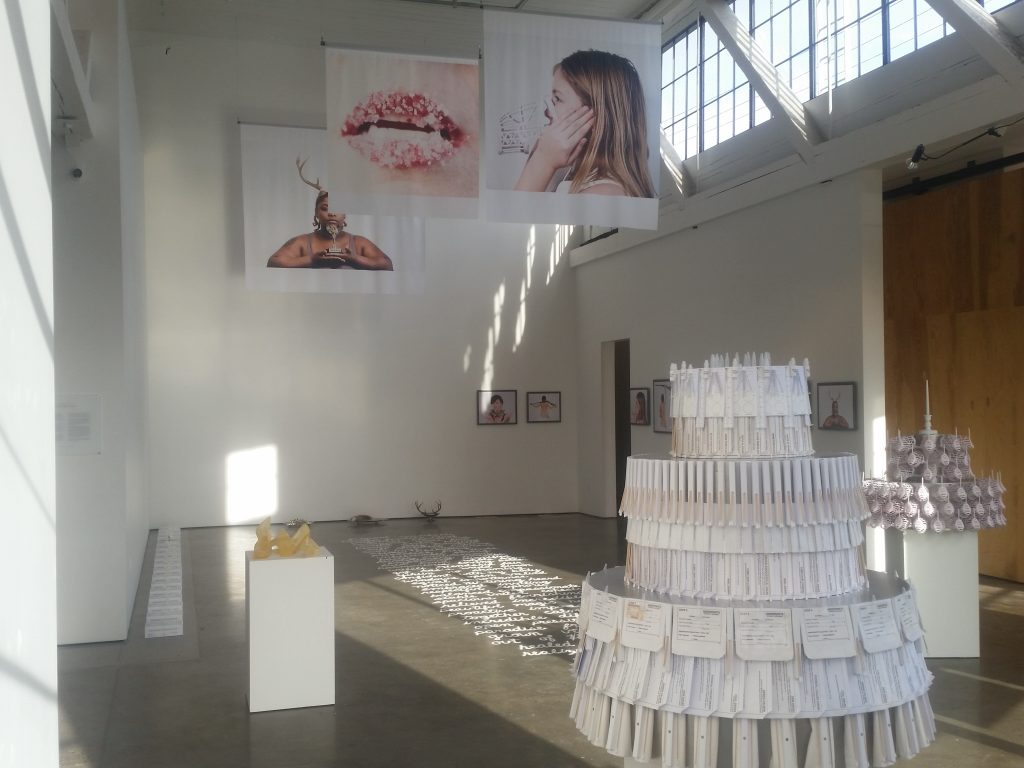 She flips this narrative again with an immersive installation at Bridge Productions, where three looping videos light up the walls. In mesmerizing slow motion, 10 women in various states of undress roll over a bed of sugar. In one video, a woman makes whistles disappear, swallowing and then gagging them back up. It’s impossible to look away, and easily the best part of the show. In another video, de la Vega writes the letters PLEASER on a woman’s back, greased with oil, using sugar.