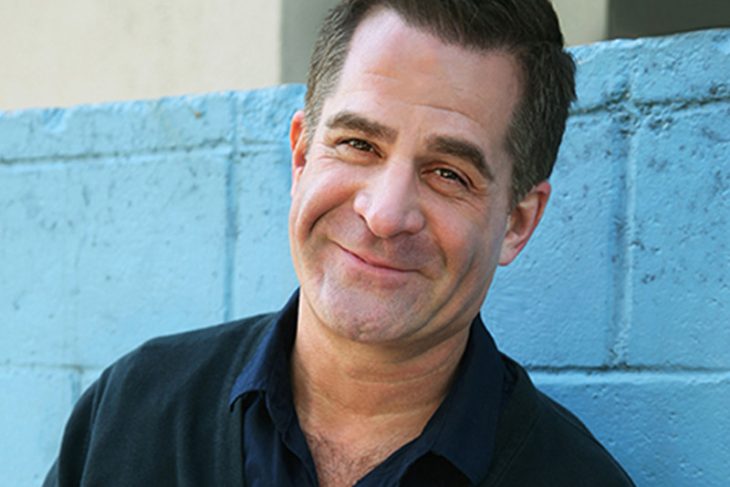 One of the greatest pleasures in comedy is the running joke, the gag that keeps going and going. A running joke grinds down the audience’s resistance through repetition and elaboration until they’re powerless against its appeal. The mechanics of how the running joke works are as follows: it starts out funny (“Ah, very clever”) then it quickly becomes unfunny (“Okay, we get it, move on”), then it somehow becomes extremely funny (“Oh my god I can’t believe he’s still at it!”). I’ve drawn a simple graph to illustrate this trajectory: 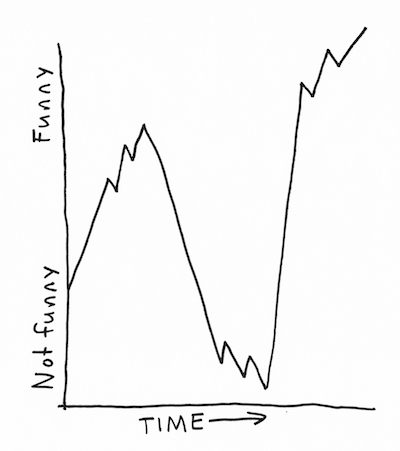 Todd Glass is the king of the running joke, or what he calls “bits.” In his standup, the Philly-born, LA-based comic will add so many tags to a joke that you almost forget what the initial premise was even as you laugh your ass off. His podcast, The Todd Glass Show, is a constant barrage of improvised bits and characters and act-outs that he hammers until his guests are sputtering, trying to keep up.

On Twitter, Glass has a couple of long-running bits that never fail to make me laugh. After he came out as gay in an interview on WTF with Marc Maron in 2012, his timeline overflowed with tweets and retweets about how much “pussy” he gets, a winking acknowledgement of his now-public sexuality with a nod to the many years he spent in the closet playing along with hetero norms. It might seem coarse to the uninitiated, but it’s actually heartwarming how Glass and his fans embraced his sexual orientation on his own absurd terms. It’s a good example of how Glass makes his personal fixations accessible to all—what’s a running joke if not an inside joke you share with everyone?

Glass’s current Twitter bit is his exasperation at fans who just can’t seem to understand that his new hour-long Netflix special comes out Jan. 23, and that it was recorded back on Nov. 5. Friends and fans tweet at him constantly asking for more details on the “upcoming” live taping—that took place over two months ago—and he dutifully tries to set the record straight. He’s cast himself as the hapless straight man, allowing everyone who tweets at him to be the comedian, a generous piece of fan service. The longer it runs and the more elaborate the misunderstandings are and the more “frustrated” Glass becomes, the funnier it gets. 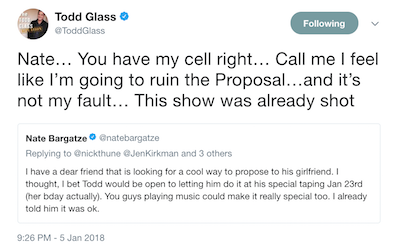 With a comedic mind like Glass’s, you can be sure many of his funniest moments happen offstage. This is the part of comedy most people don’t see, those throwaway moments among peers in the green room or on the way to the next gig. Often they’re “you had to be there” moments, too raw or situational to work out of context. Other times they start as comedic mini-obsessions that eventually find their way to the stage.

Next week, LA comedian Blake Wexler releases an album that gives us another glimpse at Glass’s gift: a selection of his voicemails called 12 Years of Voicemails from Todd Glass to Blake Wexler.  Wexler, a very funny comic in his own right, has been a friend and regular opener for Glass for years, and he’s saved every voicemail Glass ever left him. To my knowledge, this is the first time voicemails have been released as a comedy album. I listened to an advance copy, and it’s funny. It doesn’t reach the levels of hilarity you’d get from an actual standup album, but it features enough surprising moments of improvised silliness and goofy friendship to be worth a listen, especially for Todd Glass fans. Beyond that, it’s a touching tribute to the fleeting, off-the-cuff ways comics entertain each other between gigs. I asked Wexler a few questions about the album.

“12 Years of Voicemails from @ToddGlass to @BlakeWexler” releases in one week! Listen to a preview below, and PREORDER the album here: https://t.co/cfwBlMX5xI pic.twitter.com/3vgighgQVZ

What was the initial impulse to save all of Todd’s voicemails? When did you decide they’d make a good album?
At first I started saving Todd’s voicemails because, honestly, I wanted to brag to my high school friends that a famous comedian was calling me. They ended up being so funny I’d play them back to myself if I was bored, like you would a favorite song or track off a stand-up album.

The album idea actually came from Todd. At one point he jokingly said, “Blake, the voicemails I’ve been leaving you could be the greatest comedy special of all time.” I thought, “Oh, these would make a great album,” but then, like so many projects, I kind of put it aside until I was transferring a bunch of them from an old iPhone and saw the sheer number. There were over 80 total voicemails. That’s when Todd and I realized we had enough to release them.

What influence did it have on you as a young comic to be exposed to someone as funny as Todd and his offstage antics?
Todd has shaped pretty much my entire outlook on how to be a comedian. He’s so supportive of younger stand-ups and literally allots time to make everyone in a room feel comfortable, or make them laugh, or be happy in some way. There’s even an example on the album where he jokingly tears me apart for cancelling on a podcast back in my hometown, because I’m not nearly successful enough to pull off that behavior. But the message was still there: If Todd can do that same podcast, who the hell am I to cancel?

A lot of people paint stand-up as this dark world that’s filled with vice and mental illness—and it totally can be—but Todd shows the side of it that’s incredibly fun, silly and joyful. Being around Todd from such a young age was like going to the top comedy grad school on earth.

What is it about Todd that makes him so good at hammering a running gag so that it gets funnier each time?
Todd is obsessed with bits that go on for forever, be it on Twitter, real life, his act. With those you get the initial laugh, then you totally lose the audience, but if you keep going you get the best laugh ever.

I think it started with his Shamwow bit. On the road one time David Cross challenged Todd to see how long he could do it, and Todd kept topping out at like 45 seconds. Eventually it grew to over a minute, and I’ve done shows with Todd when he made the bit go over five minutes long just naming random things a Shamwow can pick up. Todd stays in those bits and almost enters a world where there is nothing else in it but him and the gag he makes run on and on.

12 Years of Voicemails from Todd Glass to Blake Wexler comes out January 12.