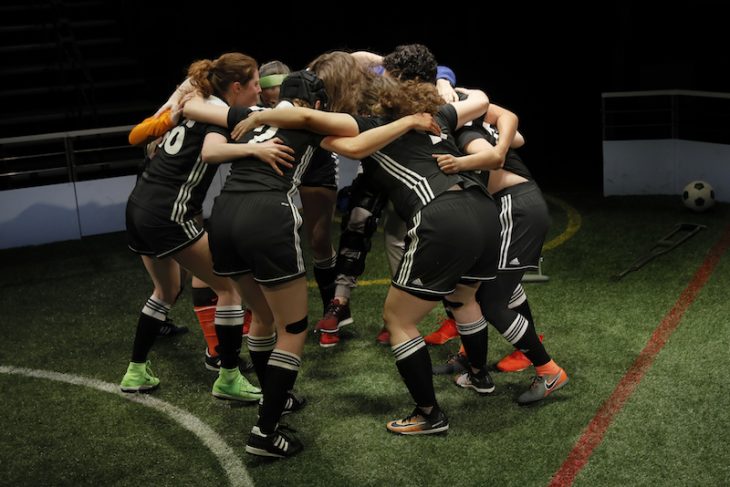 The cast of 'The Wolves,' photo by Chris Bennion

Thirty seconds into The Wolves at ACT Theatre, my brain is already lurching: Do I listen to the conversation about tampons or the conversation about the Khmer Rouge? The small squad of girls in soccer uniforms wasn’t doing me the conventional theatrical favor of focusing on one topic, but instead behaving like, you know, real teenage girls having real, zig-zagging conversations with their real friends. Sometimes genocides and periods get an equal playing field.

That overlapping, crackly millefeuille dialogue forms the heartbeat of Sarah DeLappe’s 2016 play, her first, a shooting star of a piece that earned three New York productions and a Pulitzer nomination right out of the gate. The nine young women in The Wolves are members of a girl’s indoor soccer team, and many of them have been playing together for years. They have shared language, inside jokes and vaults of memories, which makes it harder for the awkward new girl to make social inroads. Even though each young woman is identified only by her jersey number, their characters are distinct and subtly detailed. There’s intense team captain #25 (Madilyn Cooper), self-consciously goofy #13 (Rachel Guyer-Mafune), sheltered #2 (Emma Bjornson) and the aforementioned new girl, #46 (Alyssa Norling), caustic #7 (Cheyenne Barton) and her sidekick #14 (Emilie Hanson), the unsure #8 (Zoe Tziotis Shields) and eternally stressed goalie #00 (Martha Kathryn Smith).

As they stretch, these girls chat about who’s weird, who’s a bitch, who’s still using pads, who’s had sex, who has what GPA, who’s being scouted by college soccer teams, who’s being a feminist and is that a good thing?! They go from singing the musical theme to Lord of the Rings to debating the plight of exploited Central American children in a blink.

Teen girls are funny and thoughtful but also sometimes terrible, and in The Wolves they get to be terrible in a way that isn’t about making them two-dimensional mean girls, catty and cruel and obsessed with their own hotness. This place—and this play—is a too-infrequent locale where teen girls can be themselves and be together, saying stupid stuff and pissing each other off and laughing and learning and generally figuring out who they are. Some want to be older and some want soccer nationals to be in Orlando so that they can all go to Epcot, but every one of them is a dedicated athlete, so win or lose, they do it together.

Each scene takes place on an Astroturf field as the team warms up before a game (the set by L.B. Morse is beautifully aided by Robert Aguilar’s steady, sterile indoor-field lighting), giving the show a clear physical and formal structure that DeLappe then messes with to reveal the many small interpersonal cracks inherent in any team. When a team tragedy occurs, that foundational strength is pushed to its limit (and also leads to a stellar turn from Christine Marie Brown, in a small role as a player’s mother).

DeLappe wrote The Wolves as an honest, relatively straightforward take on teen girls; she trusts them to be interesting as they are. As directed by Sheila Daniels, this Wolves is littered with over-the-top physical bits and odd line readings that betray a distrust in the material to be funny or relatable on its own—you don’t have to mime a dick joke for a dick joke to be funny, and you don’t have to snarf down oranges like a starving bear for an audience to get that we’re dealing with an eating disorder. (Also, for my money, actors should be spending 200% more time learning to naturally deliver lines with the word “like” in them as they are learning to deliver Shakespeare.)

After the show, I heard a middle-aged man say “I just don’t connect to teenage girls.” Rather than letting my eyeballs roll right out of my head, I silently thanked DeLappe for creating a place where young women are seen, heard and valued as individuals, and this group of talented young women for telling us their story. If you don’t connect with that, try harder.

The Wolves runs through May 13 at ACT Theatre.