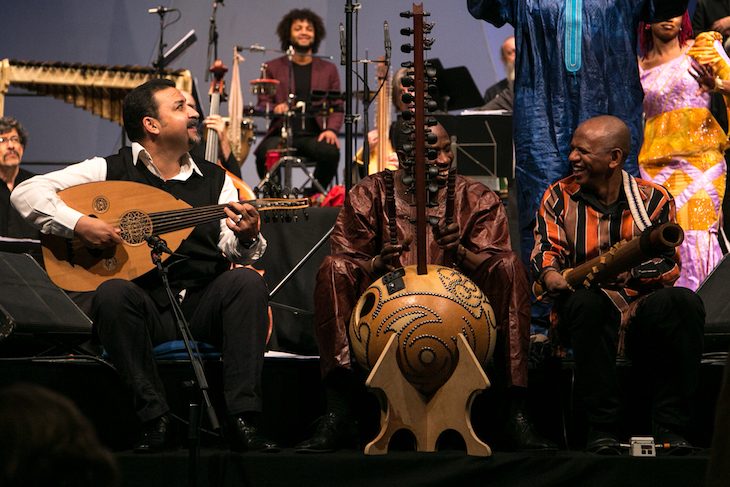 For victims of the transatlantic slave trade, music was not only a place of refuge but an act of resilience. From 1444 to 1800, millions of Africans were captured and bound in slavery by European countries. We don’t know the exact number and we don’t know their names—their histories were taken from them. One thing that remains is their music.

Routes of Slavery is a multicultural concert honoring the histories of the enslaved. Created by Spanish viol player Jordi Savall, the touring performance brings together artists and instruments from Europe, Africa and the Americas to illustrate the tragedy of the slave trade and to honor the humanity of its victims.

“These people had lost everything,” Savall says. “But still, they conserved the joy to sing, to dance. Music was the only space of freedom. When they made this music, they were human.”

Routes of Slavery comes to Seattle on Nov. 6. Presented by Early Music Seattle and the Seattle Symphony, the performance features musicians from Mali, Colombia, Mexico, Brazil and Venezuela sharing the stage with two of Savall’s own musical groups: the early music ensemble Hespèrion XXI and the Catalan vocal ensemble La Capella Reial de Catalunya. Among the international cast of over two dozen musicians are the likes of the Malian kora master Ballaké Sissoko, Brazilian percussion virtuoso Zé Luis Nascimento and Venezuelan bassist Iván García, to name a few.

The performance unfolds as a series of traditional songs, spirituals and folk tunes from across the African diaspora, with different ensembles trading off performing short pieces onstage. In this way the concert preserves the unique character and history of each musical tradition while also allowing some improvisatory moments between ensembles to highlight a shared language of music.

“To give a concert is to tell a history,” Savall says. Woven throughout the performance are primary texts tracing the chronological history of the slave trade, from the initial conquests and captures through the daily terror of slavery, the shifting tides toward emancipation and the continued fight for equal opportunities today. The texts are narrated by Dr. Stephen Newby, a composer, gospel/jazz vocalist and professor of music at Seattle Pacific University.

To create a historically sensitive performance, the presenters also enlisted the help of Dr. Monica Rojas-Stewart, a University of Washington-affiliated scholar, artist and community activist. As a cultural anthropologist and Peruvian cajón player, Rojas-Stewart provided feedback on the script and programming materials to create a more holistic representation of the African diaspora.

“This history has been told, but we really need to consider who is telling the story,” Rojas-Stewart says, noting that most of the written history of the slave trade is told from the perspective of the colonizers observing the “other.” “That is problematic because the people the colonizers are talking about don’t have a voice.”

Beyond the historical inaccuracies that can arise from a one-sided colonizer perspective, a host of subtler issues and stereotypes surround the way descendants of the African diaspora are portrayed. As Rojas-Stewart notes, the history of people of African descent does not start with slavery—and it doesn’t end there, either. Highlighting a diverse range of voices and providing a broader context for the African diaspora before and after the transatlantic slave trade is critical to telling a more complete story.

“There’s a romanticized view of the ‘noble savage’—in anthropology we use this term to refer to that colonial kind of description of the enslaved individuals and their victimization,” she says. “And the problem is that it’s not empowering. People of African descent for hundreds of years have been trying to move on from that victimhood and instead use history to empower themselves, to talk about their resilience and resistance.”

The music of the enslaved reflects this resilience: beauty created under unspeakable cruelty. After being forcibly taken from their homelands, slaves had to rebuild their own musical instruments from memory, using whatever materials and tools were available. African musical practices were fiercely suppressed and controlled by the slave owners. Rojas-Stewart says that in some areas of the African diaspora, skin drums were banned because they were used as a means of communication between slaves who spoke different languages. Colonizers intentionally grouped together people from different language groups so that they couldn’t communicate or organize resistance. But music was a universal language.

“Music is the first language and the last language,” Savall says. Newborns understand music before words, and melodies can spark vivid memories even in the final moments of life. Music carries the shared history of humanity, the stories of countless voices, forgotten times and faraway places.

“Music is such a powerful tool to bring people together, to heal, to discover our common history—to discover how similar we are and how different we can also be,” Rojas-Stewart says.

Slavery is by no means confined to history. An estimated 40.3 million people live in modern slavery today, according to the Global Slavery Index. This includes forced labor, forced marriage, human trafficking, debt bondage and other forms of slavery. The far-reaching effects of slavery continue to shape race relations and economic disparities of today, and the countries involved in the transatlantic slave trade have still never taken meaningful political responsibility for the lives they’ve stolen. Savall says he hopes Routes of Slavery will make audiences think critically about the world we live in today and our responsibility in shaping it.

“A nation who cannot give real possibilities for a life with dignity for all its citizens is not a good nation,” Savall says. “When we don’t say anything, we are saying it is okay. We are accomplices. If you think that life is a beautiful thing, you have to fight against injustice.”

Routes of Slavery continues the conversation around the topic of slavery. On Nov. 15, Rojas-Stewart and Newby are co-directing Roads to Reconciliation, an evening of interdisciplinary performances and community dialogue exploring the role of art and music as a means of reconciliation in African, African-American, Latin American and Caribbean communities.

“The most important thing is to make people aware of the history, but also how this history is very much part of our present,” Rojas-Stewart says. “We need to be responsible for things that are happening in front of our eyes in our communities, in our countries and in our world.”