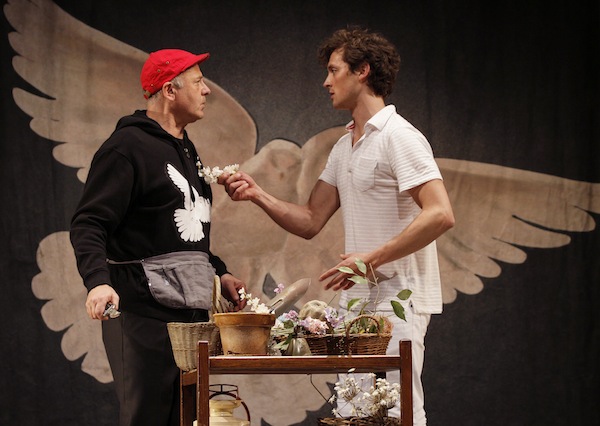 Amid this cool and drizzly Seattle summer, the vaguely North African setting of Romeo and Juliet in the Intiman Theatre Festival suggests plenty of heat. Clad in desert white, the fiery occupants of Verona’s bazaar ignite Shakespeare’s tragedy under the appearance of a blazing sun.

But while there is plenty of fire among the excellent cast, there’s little actual heat in the portrayal of young love.

The challenge of staging Shakespeare’s great romance is that we all know the story of forbidden love between two children of feuding families. Most of us may think we are familiar with it from the musical West Side Story or from being butchered in television sitcoms, but all know that it will end in blood. The best productions manage to convince us that this time, by some miracle, noble Romeo and fair Juliet might escape.

Director Allison Narver accomplishes the first prerequisite, creating a world truly riven by faction. Suggesting perhaps modern Tunisia or Libya, the tribal, religious and political divisions of those regions is a perceptive fit for Renaissance Italy. Narver maintains a quickening pace, allowing the bitterness between Montague and Capulet to fester, with portraits of the dead adorning their caftans. Through costumer Deb Trout’s design, the weight of history continues to accumulate as the corpses pile up, and pictures of the newly martyred are pinned to chests.

It’s amid this savagery and grief that Quinn Franzen, as Romeo, and Fawn Ledesma, as Juliet, encounter each other and strive to find their own happiness. Both actors impress by their genuine portrayal of youth, with Franzen’s stubbornly ruddy cheeks and Ledesma’s seemingly coddled ignorance of the world’s brutalities. If their lovers grasped the depth of their predicament, they would not plummet into it so rashly.

We can certainly understand those stakes, in part through the grand performance of Michael Place as Romeo’s friend Mercutio. Place gallops through his revels with brash strokes, taking athletic glee in his fatal battle against the rival Tybalt (an excellent Shawn Law). Marya Sea Kaminski gives a broad and delightful turn as the Nurse, clowning with Burton Curtis’ precisely timed Peter, whose position as servants transcends the fights of aristocrats. As Lady Capulet, Carol Roscoe bears the familiar frustration of the parent of a teenage fool.

While Narver keeps things welcomingly brisk, that same furious pace harms some of the play’s major moments, notably the famed balcony scene. Intended as moments of discovery, these delicate occasions feel crushed. Because of the speed, the flowering ardor between the smitten Romeo and innocent Juliet lacks urgency.

What suffers is their intensity of need and sense of desperation against implacable obstacles. By the time of Friar Laurence’s scheme to save them, we can’t shake our awareness of their doom. Rather than choking on hope, we’re mostly eager for them to get on with it.