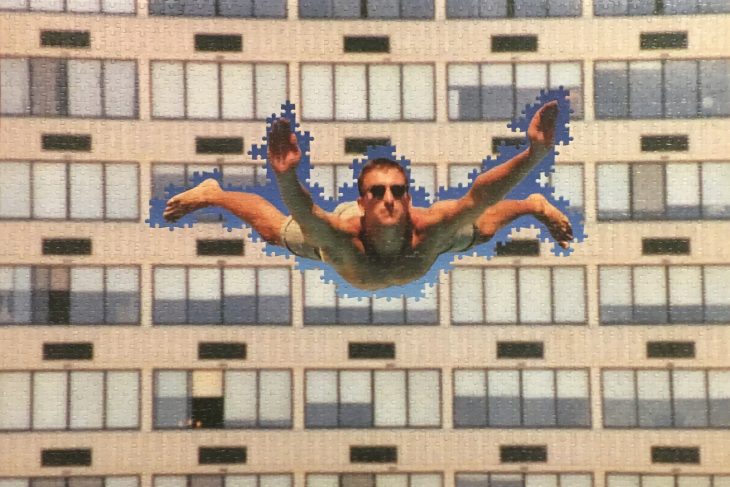 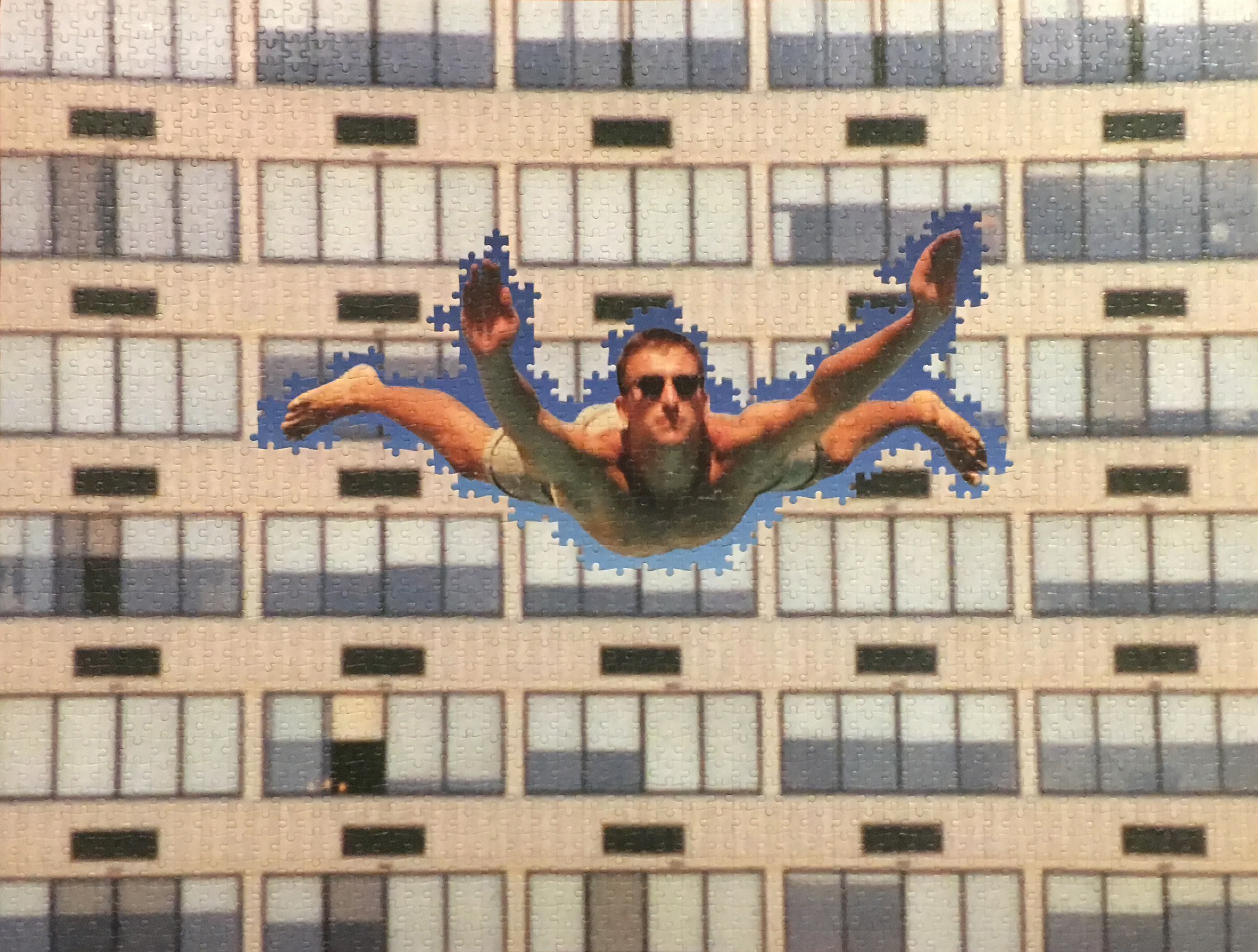 The flood of images is dizzying. Cigarettes, beer bottles and bloody faces, grandmas and cats and bright sunlit photos of friends in the grass. Shots of the Twin Towers through a fence suggest the photos are remnants from the past. Snapshots of nature and buildings and beautiful bodies in various states of undress are hung side by side like a curtain, from the top of the 20-foot-high walls of Dendroica Gallery.

This feed of images, comprising 1,400 35-mm photos, is the work of Seattle artist and writer Robert Zverina. The show is titled ARTisANAL. The photos cascading down the gallery wall are titled “#veilofmemory.”

“It’s a reiteration of a 2004 version of the same concept,” Zverina says while the early afternoon sun illuminates the darker photo prints. “Since then, entropy has taken hold of the photos. They’ve also gotten somewhat randomized. And that’s exactly the way I put them up—at random.”

On Sunday, Zverina will pack up the photos and put them back in the storage space where he’s kept them for 15 years. Zverina is a hoarder of photos, niche memories, artifacts of history that fall outside the scope of the Big Events. The archive dates from 1986 to 2002; he’s never been able to bring himself to toss them. There must be tens of thousands of such moments stashed in boxes.

“I like how they’re tangible artifacts open to serendipitous rediscovery, as opposed to the digital landscape where you snap it, post it, share it, after which it kind of disappears,” he says. “The closest we can get to that is maybe the programmatic anniversary thing Facebook might throw at you.’”

Although most of his shots didn’t make the cut, Zverina’s approach feels far removed from the self-censorship of perfect social media posts. “#veilofmemory” leaves room for mishap, chance and failure. Nothing is sacred or intended as a social construct. Zverina makes space for memories to form.

Though Zverina has been working in digital arts for 20 years, “#veilofmemory” is a throwback to a time before the digital artosphere. For Zverina, that split occurred in 1997 when he bought his first digital camera. He caved mainly because of storage issues, he says. Digital storage simplified the problem—or so he thought. But all it did was multiply the memories to keep track of. He traded boxes for hard drives.

Zverina has always thought of technology as a tool in the service of memory. He was an early adopter of the web, and in 1996 he taught himself HTML. “It came from my interest in self-publishing,” he says. “Kind of a DIY-punk ethic. I saw the web as an amazing opportunity for that.” By 1997 he was publishing daily stories and pictures on his website zverina.com. Before that he was on track to become an academic poet, armed with a BA in English and an MFA in poetry. He’d studied with Allen Ginsberg.

“I was on my way down the academic publishing path, but who really reads those literary university magazines except a small circle of friends and family?” he asks, smiling. “I was getting tired of sending in poems and then getting comments or rejection letters months later. But the web—it had an immediacy I could never get enough of. A way of allowing me to just get it out there, then move on to the next thing. I’d say this is still my approach: to be prolific. I don’t get hung up on trying to create the masterpiece.”

In ARTisANAL, the mastery is in the overwhelming mass of images, the endeavor of documenting everyday life every day.

“Often people tell me they get hung up on specific photos in this photo curtain,” he says. “I see them as bricks in a wall—although there is a lot of fine grain that people can get into.” 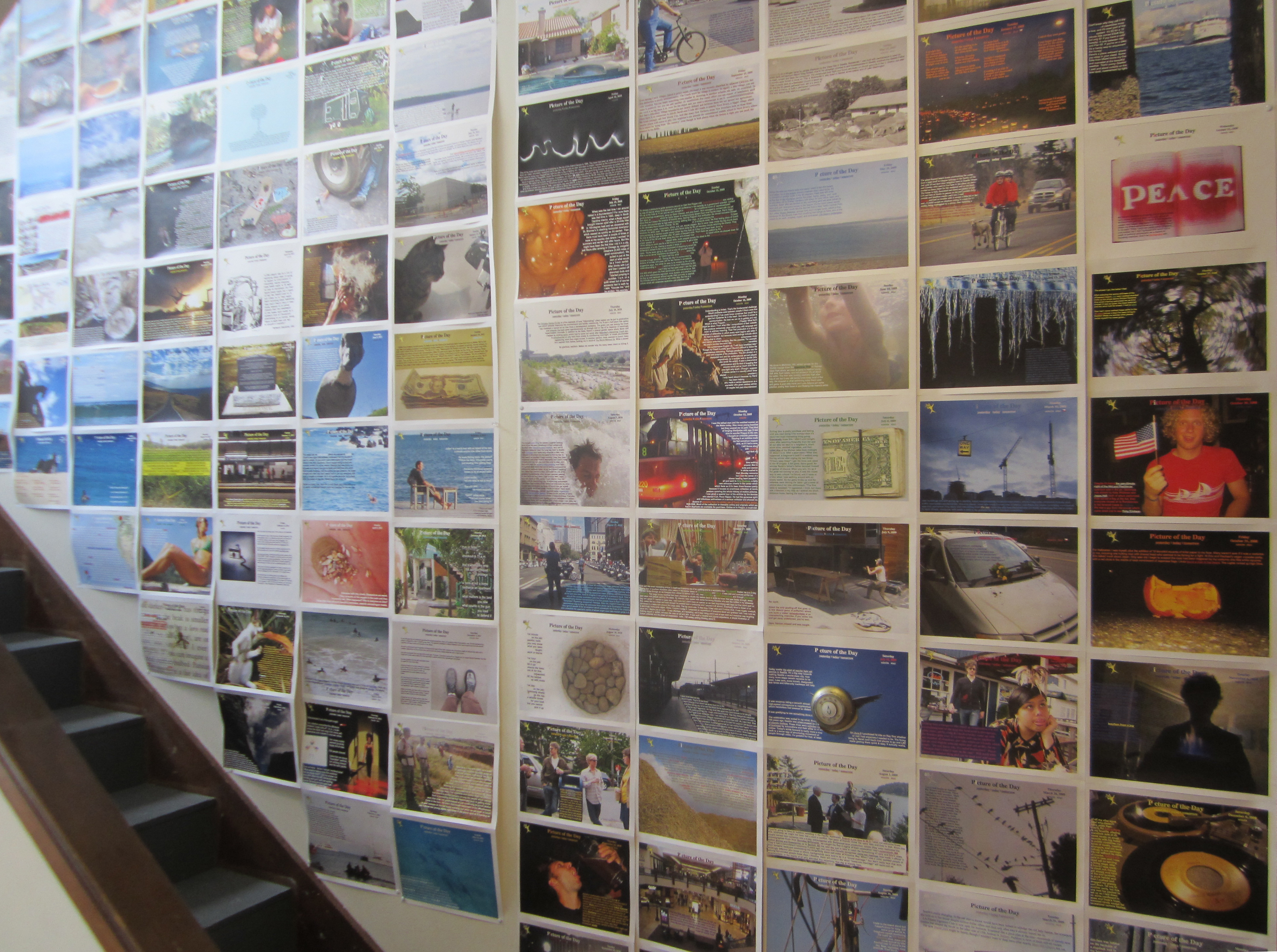 On the opposite wall of the gallery, starting from the second floor, hang 358 of Zverina’s Pictures of the Day, printed on simple printer paper. These printouts, collectively titled “Writing on the Wall,” represent 20 years of online output, Zverina’s almost-daily writings about travel, politics and poetry superimposed on his photos—empty parking lots, ferry windows, ducks, cats. His website is a vast archive of posts in chronological order.

In an ironic twist, going back in Internet time means printing things that have existed solely in the digital world. For the first time, they become tactile artifacts. The piece “In A Police State…No One Is Innocent” is heavy—in many meanings of the word. It’s his “Picture of the Day” post from January 10, 2017, printed and embedded in a heavy acrylic block weighing about three pounds. In it, Zverina tells the story of his mother and grandparents who were persecuted and imprisoned under the Soviet occupation of Czechoslovakia: This is how it happens. A coup is followed by purges, state intimidation keeps the rest in line. In a police state, no one is innocent. Here we go again.

Zverina’s assimilation of digital memory into the tangible realm implies a lingering longing for something we can hold. With the solidification of a single web page in acrylic, Zverina renders it tantamount to monument or memorial. One stops, if for no other reason, to feel how heavy it is.

Zverina made another tactile artifact of his web writings in the form of two books, anthologies of “Picture of the Day,” although these aim more for longevity than tactility. When he holds a book in his hands like a relic, Zverina says that even after 20 years on the web, he thinks books might be longer-lasting: “When the grid goes out.”

Another portion of the exhibit is a shelf lined with Zverina’s catalogue of robZtv-DVDs, onto which he’s filed more digital data. Running seamlessly and seemingly endlessly, they feature hazy sequences of short, low-resolution clips that hypnotize the viewer from a big TV screen. These 15- to 30-second videos, shot with a Canon S200 Powershot, require neither swiping nor tapping—a pleasantly dated feeling in the Snapchat era. Before you know it, the moving windows into the past have passed. Once hooked into a stream that can’t be manipulated or turned off, there’s an odd craving to surrender, to see it unfold.

Since making the bulk of these videos in the first decade of the 21st century, Zverina has moved away from them to write novels and make music. But he still shoots with the same camera today.

“I’ve often thought that I wouldn’t keep doing these videos or that ‘Picture of the Day’ was going to die, but somehow I always come back to it. It scratches a creative urge,” he says. “Since I was a kid, I’ve been telling stories and taking pictures. I believe that children have this sense of curiosity and experimentation that get crushed out of them through regimentation. A lot of my work is fighting that. Making this art on a consistent basis is what helps me overcome my conditioning. It helps me be a free and curious human in a totalitarian age.”

ARTisANAL is on view through Sunday, March 5 at Dendroica Gallery. Zverina will read from his Picture of the Day blog on Saturday, March 4, at 7 p.m. after a closing reception at 5 p.m.