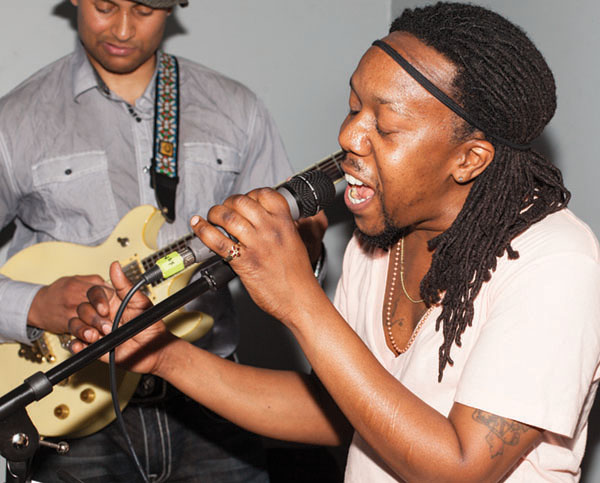 Here’s Tendai Maraire in 1984, tight crown of an Afro haloing his 10-year-old head, stepping off a plane at Sea-Tac after a 25-hour flight from Harare International. He’s spent the last two years living in the Zimbabwean village of Dangamvura with his maternal grandparents, inadvertently absorbing an accent into his native English, never quite grasping the indigenous Shona dialect. His sole link to the world beyond the village was British-run radio airing Dolly Parton, Kenny Loggins and the like, day after day after day.

“And here comes one of my brothers, ‘Yo, yo, yo!,’” Maraire recalls almost 30 years later, like he’s back there at the arrival gate. “He gets on the ground and does a backspin and a helicopter, and we’re looking like, what the hell is he doing?”

His family’s first stop on the way home from the airport: the U-District Pizza Hut. His brother, as if taken with some kind of fever, engages a couple of Filipino kids in a breakdance battle over by the jukebox. Maraire has no idea what he’s doing but follows his brother’s lead. “And I’m like, ‘I don’t even know how to breakdance!’ But I’m bopping my butt off as hard as I can ’cause I know I don’t want to lose.”

Absent from Seattle during the onset of hip-hop, Maraire had arrived home to find a drastically altered world: a new kind of music, language, dress code, moves. He didn’t take long  to catch up. Within a few weeks, he’d mastered enough pop-and-lock technique to take center stage solo at Summer Break ’84, the first mainstream hip-hop show held in Seattle. YouTube it: Little Tendai rocks the opening scene of KOMO’s Summer Break special as meteorologist Steve Pool declares, “These kids are really something, aren’t they!”

Now 40 years old, Maraire is best known as one-half of Shabazz Palaces, the avant-rap duo set to release their second Sub Pop album this summer. He works with the Pacific Northwest chapter of the Recording Academy, a musicians’ advocacy group, fostering sustainable careers in the music industry around the Northwest. And this spring he launches his latest world-straddling endeavor, Chimurenga Renaissance—a high-concept, bass-heavy sound system that weaves traditional Zimbabwean instrumentation, future-leaning hip-hop and electronic production into a beautiful, dizzying spectrum.

Released in March, Chimurenga’s debut album riZe vadZimu riZe begins with hand-slapped drums, Zimbabwean mbira—aka thumb piano—and Shona vocal melodies that date back generations. From there it’s fattened with the tick-tick-bump of sampled percussion and sheened by electronic production. West African-style electric guitar glides sweetly in and out. An imposing low-end booms almost subliminally. Maraire raps with a quick cadence and assertive tone. The songs are dense with big-picture observation and poignant personal detail. In its initial, small-run release, it’s packaged as a matchbook-size wooden pendant embossed with a family crest. Inside is a USB flash drive of MP3s.

The first single, “The B.A.D. Is So Good,” describes a lifetime of growth from childhood simplicity to the dangerous contradictions of adult life. In “It’s Bigger than You,” Maraire addresses the character types common to his community—MCs, ball players, dealers, single parents, pimps—with a demand for humility: “The world is bigger than what you want/Minks, ice, chains and pulling Glocks/There’s consequences to what you do/When the cops get crooked the goons will shoot.”

You don’t need a working knowledge of African history to appreciate Chimurenga Renaissance. But it helps. In fact, Chimurenga Renaissance might be a reason to educate yourself about a part of the world with very real, very current ties to the Northwest. It’s also a reason to dance yourself into a frenzy: riZe vadZimu riZe is as much a cultural bridge as it is groove machine. It will bump from car windows and back-porch parties this summer whether or not those doing the bumping understand its origins.

Zimbabwean music comes from a culture a thousand years old, from within one of the last African republics to shake off colonial rule. For most of the 1900s, what we today call Zimbabwe was known by the name given it by British imperialist Cecil Rhodes. For decades the indigenous people of Rhodesia waged guerilla war—called chimurenga in Shona—before they assumed independence from the British crown in 1980. Only then did the world officially recognize the nation of Zimbabwe.

Even that recent designation is fraught. Tribal culture and Western socio-economic schemata tend to conflict along fundamental lines. Among Zimbabweans, 16 official languages are spoken, reflecting independent tribal histories that bear little credence to the UN-designated umbrella of statehood. The current leader of the country, Robert Mugabe, has maintained Presidential power since his election in 1980, in what many consider an abusive, authoritarian regime.

Possessed equally by Africa and America, moving physically and psychically between cultures that are often at odds, Maraire owns his bifurcated identity. He brings unassailable credibility—not to mention talent—to both sides of the equation. Music has infused his life from his earliest days. His parents moved to Seattle in the late ’60s so that his father could study and perform music at the University of Washington; by the early ’70s, Dumisani Maraire had become the foremost scholar of Shona music in America, the first to transpose traditional mbira and marimba music to Western notation.

In high school, Tendai rapped under the name Boy Wonder with a crew of other hip-hop luminaries to-be. Whenever his friends stopped by his mom’s Central District house to make beats on his Dr. Rhythm drum machine, he was sure to hide his violin in the laundry room. He kept his classical and traditional leanings separate from his love of hip-hop.

African, American, African-American—the threads of a global existence come together in Maraire’s intense, engaging persona. This is not a guy who smiles a lot or speaks heedlessly. He radiates the gravitas of someone deeply self-possessed, proud of his history and intent on his future.

“If you were to hang around my family, it’s always been music,” Maraire says. “My dad loved James Brown; my mother loved Roberta Flack. But then you’re listening to African music all the time and traditional music. We got tapes of us sitting around and singing ‘Kumbaya,’ Stevie Wonder, Led Zeppelin, commercial jingles, you name it. We sang everything. It would be annoying for somebody who wasn’t in the family.”

Dumi, as his father was known, traveled back and forth between Seattle and Zimbabwe, gone for long stretches at a time. Tendai says his dad offered little instruction to his kids, instead expecting them to pick up music by proximity and individual practice. Dumi was an internationally recognized figure, friend and collaborator to superstars like Taj Majal and Hugh Masekela. But at home, he was a minimal presence. For the most part, Maraire and his many siblings were raised by their mom.

Even without direct instruction, the family band played Bumbershoot and Folklife year after year. They earned a dedicated following from the African community and from folk music fans of Seattle and beyond. Alongside a dozen brothers, sisters and extended family, and occasionally his dad and mom, Tendai sang, danced and played a slew of percussion instruments on stage. Mbira is the one that stuck with him.

Centering a postmodern hip-hop group around the mbira is a radical move—and a beautiful one. The instrument is indigenous to all parts of sub-Saharan Africa, known by different names throughout the continent. Most are constructed by hand by whoever expects to play it, fashioned from half of a hollowed gourd, a wooden soundboard and a set of 20 or more metal tines tuned to a certain scale. Individual mbiras might be adorned with metal bottle caps or seashells to add vibrato and distortion.

Handheld and plucked with the thumbs, the mbira sounds joyous in the metallic purity of its chime, reminiscent of a child’s playground or an ice-cream truck ditty. At the same time, its hollow, woody resonance echoes with a longing sadness. It carries incredible color and rich emotion for a relatively simple instrument. In Chimurenga Renaissance, mbira is both sonic bedrock and symbolic totem.

“There would be no Chimurenga Renaissance without mbira,” Maraire says. “It’s the foundation of Zimbabwean music. The time signatures, the cadences, the melodies, the arrangements—it’s all mbira. A song might last 45 minutes, it might last two. It brings out instinct, perfection. It mediates communication to the higher power, the spiritual beings, the ancestors.”

To take the project live, Maraire incorporated extensive mbira samples so that he can focus on vocals and digital augmentation. He also recruited a pair of musicians with credentials as solid as his own.

Maraire has known guitarist Hussein Kalonji for 20 years, beginning back in his Boy Wonder days when Kalonji was an MC known as H-Bomb. Together they were part of Seattle’s first wave of hip-hop artists, working alongside future icons like Vitamin D, Jake One and DJ Supreme La Rock. When he was MCing, Kalonji never dreamed of playing guitar, even though his father, Raymond “Braynck” Kalonji, was a celebrated Congolese guitarist. Like Maraire, Kalonji awakened to his heritage in his early 20s and embraced his father’s instrument.

The final component of the live Chimurenga Renaissance experience is a Zimbabwean-born musician and dancer named Jimu Makurumbandi. Makurumbandi is a powerhouse performer who’s toured across Europe with a slew of African troupes as well as with Chiwoniso Maraire, Tendai’s older sister and Zimbabwe’s brightest pop star until her death last year. Chi introduced Makurumbandi to Tendai a couple of years ago and the two bonded quickly. When it came to completing his ensemble, Maraire knew exactly where to turn. (Along with playing in Chimurenga, Makurumbandi will spend the next year in Seattle as a visiting teacher in residence at Spectrum Dance Theater.)

The group’s first-ever band rehearsal happened in early April at a nondescript practice space in SoDo—an ironically drab setting for this effervescent, peacock-shiny music. Makurumbandi had arrived in Seattle just two days prior and was still reeling from jet lag but beamed anyway. Before starting the session, he called out to the room, “We’re gonna make Seattle the heartbeat of America!”

The trio attempted to reproduce riZe vadZimu riZe, piling up in some places, smoothing out rough spots in others. Kalonji’s guitar gleamed with relaxed elegance. At one point, with a pair of shakers in hand, Makurumbandi leapt from behind the conga drums and exploded with a volley of high kicks. “I expect everyone to be in the village for that one,” Maraire said afterward.

A few days later we’re seated at an evening café on Capitol Hill. These three cast an arresting scene: Two big men and Maraire, seemingly half the height of the other two, with designer shades, colorful clothing, long black braids, animated gestures. In conversation, in outlook, they embody a collective band identity, one made whole in the music. They also stand in opposition to something larger and harder to identify.

“The theme of Chimurenga is resistance,” Makurumbandi says over a glass of red wine. “That means a lot of things. Everything you see—movement, sound, even colors—this is a part of Chimurenga. It is a symbol.”

“It’s the whole formation of that struggle,” Kalonji adds. “There were a lot of African struggles, and Zimbabwe was one of the last countries to gain their independence. I remember that as a kid, people were like, ‘This has gotta stop.’”

They describe a historic struggle as well as a timeless one: the battle for substance over appearance, for spiritual riches over financial wealth. This is the legend of Chimurenga. This is the call for a renaissance.