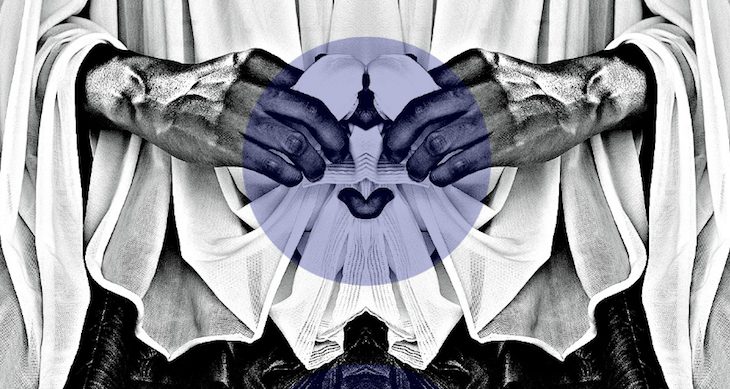 In the back room of West Seattle’s Virago Gallery in early August, walls have been painted black in preparation to receive Black Imagination: Ritual Objects. The third installment in this year’s Black Imagination series, Ritual Objects gathers together creations by 14 artists, writers, community members, activists.

Red, blue, pink and more colors of delicately beautiful bottles line the top of a wall, each of them infused with meditations on Black Joy by the project’s collaborators. One couple read their love letters over their bottles. One man thought about where he came from and how he has created a life of joy for himself while sitting with his bottles. The bottles may be purchased and taken home, along with unique meditations and rituals made for the infusions. If you purchase a bottle from one of these limited collections, you are taking home a valuable object that has been metaphysically transformed with precious Black Joy, even as it appears to be empty.

The heart child of conceptual artist Natasha Marin, the exhibit also includes Marin’s paintings of orbs in shades of blue, as well as empty frames piled with strips of cobalt canvas that dare us to put Black Imagination in a box, and a large goddess figure known as “Russum.” Ritual Objects also includes two sound bath events performed by Amber Flame and Rachael Ferguson, and a blessing event this Saturday, Aug. 18.

At an incantation event earlier this month, participants entered the space ritually as Roman, Marin’s daughter, cried out a proclamation in Mandarin. Participants were handed pieces of paper with affirmations to repeat in a symphony of Black Joy.

As the evening’s appointed roku or scribe, as the ritual progressed, I recorded on a typewriter:

“i am held in love… my purpose is to allow my healing to unfold. here is the ground of my blue. wooooo. feel it. make it. say. dream it. be it…. there is a corner that has been waiting to hold you since before you woke up this morning. my purpose is to allow. wait. wait. word. read. read, in the name of your lord.”

The room blessed the entire project in a ritual dance of Black Joy—participants in a circle turned to each other, circled each other’s crowns with blue canvas, returned their hands to their own heads in a somatic embodiment of witnessing.

Some days later, I attended a sound bath offered by Amber Flame in the same space. I and one other attendee were shrouded, sprayed with rose water and fell into a deep trance as Flame sang, played music, rustled her luscious crimson skirt, recorded and looped it all back, while Marin passed by and massaged our feet with a creamy lotion. The event both lasted a lifetime and was over too quickly. I went home and had one of the best sleeps of my life, afloat in the honor and blessing of witnessing and experiencing Black Joy—authentic expression unfiltered by the expectations of white society, genuine joyfulness.

I spoke to some of the participants about why this project is so important in this moment. Below is some of what they said.

“When I told a friend of mine that I was participating in the Black Joy project, she asked me point blank, ‘Well, what’s the difference between Black Joy and anyone else’s joy?’ And, without missing a beat, I responded that it seems to be that Black Joy is so hard to come by, so buried in other things, and, finally, so hard won.” —Brian Broome, writer and Black Joy infuser.

“[Ritual Objects is so important because it demonstrates] a greater need for unity and how do we do that. We have to come together. Just like our oppressors are doing. They are coming together in droves with all of their resources. We are not doing that very well as a community and as a people. We need to be better.” —Marlon Brown, Racial Equity consultant, owner of Bessie’s Cakes, host of Church with Mr. B on Hollow Earth Radio and Black Joy infuser

“This project is as telling a reflection of our times as the Trump administration, in terms of showing what is truly valued in juxtaposition to what truly nurtures us. Our society doesn’t value black joy, but it sure loves to devour it!” —Amber Flame, multi-genre artist and writer, and sound bath healer for Ritual Objects

To decenter whiteness, I also asked how folks would describe their Black Imagination in non-rational ways, in ways that emphasized body and imagery.

“Have you ever seen those lizards that can run on water? I don’t know what they’re called, but when threatened, they literally just take off and start running on water. They don’t seem to have a particular destination in mind or a plan or an escape route. They just know that, out here, the thing that was chasing them can’t get at them. They’re harried and sprawling when they run. They look kind of silly when they do it. I am the lizard. The water is my imagination. I can’t rest there but I can use it as a means of escape.” —Brian Broome

“My black imagination is a textured landscape of vibrantly woven sound and story. It is not something you look upon so much as something felt deeply within. It sounds like two black women passing a joint and laugh-agreeing about the weight of their own breasts. It sounds like two black children wearing capes and running down a hallway. It sounds like a black man recognizing his own holiness. I see us holding and healing each other by first seeing and recognizing each other as complete and whole.” —Natasha Marin, conceptual artist, community builder, anti-racism and equity consultant for NONWHITEWORKS, creator of Black Imagination

Finally, I wanted to know how the precious quality of Black Joy had been elevated for the participants through the course of this project.

“This has been the most joyful creative period of my life. The high point for me was the look on my daughter’s face after she sold one of my paintings. There is something about a carefree black girl that is remarkably beautiful—Roman is delightfully unbothered by so much. To me, this is joy.” —Natasha Marin