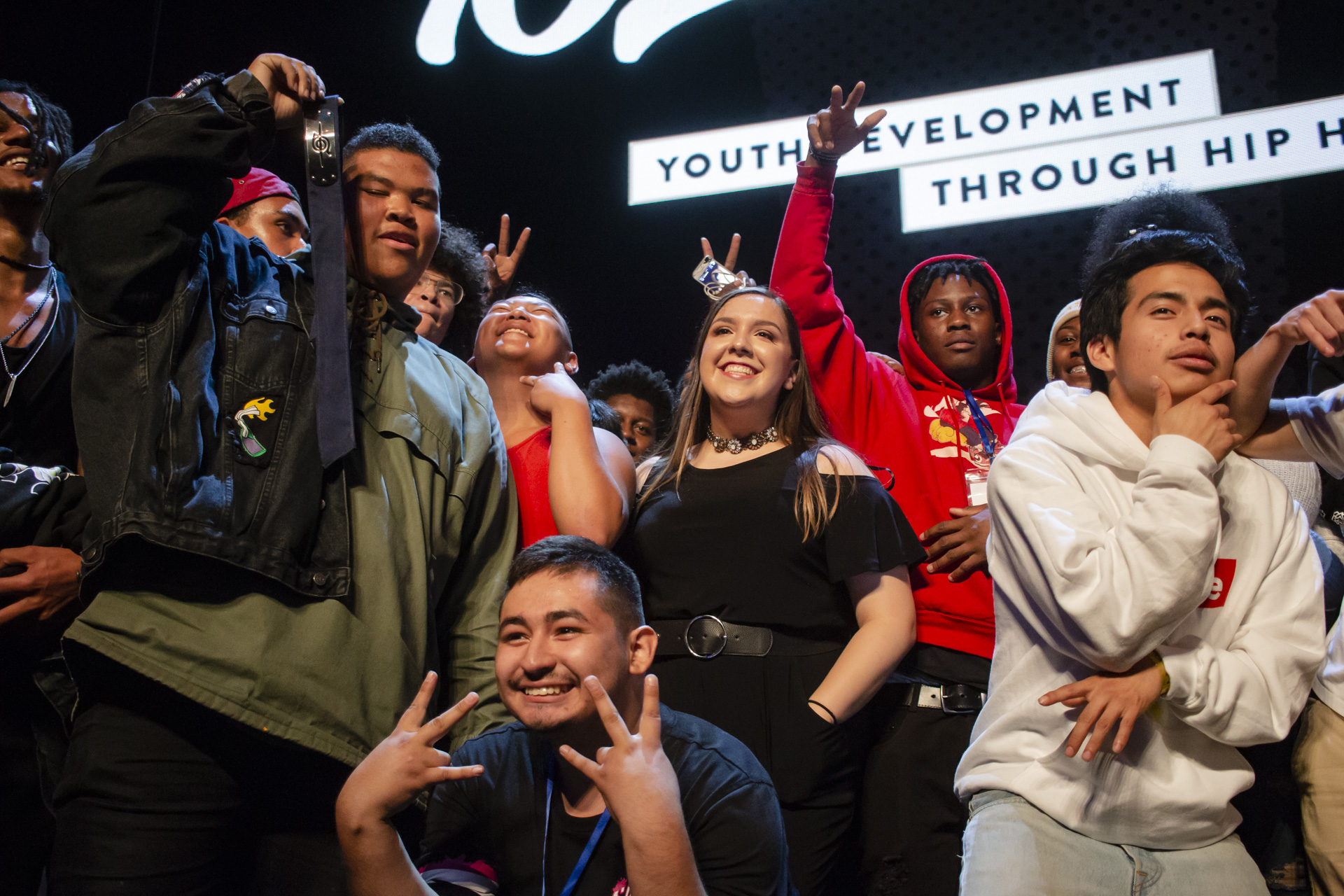 The Residency Showcase finale. All photos by Amy L. Piñon

Three words guaranteed to raise a performer’s heart rate. Particularly if they’ve seldom performed in front of a live audience, more so if that audience numbers in the hundreds and even more so if the performance takes place at a venue like the SkyChurch, an intimidatingly beautiful space inside the Museum of Pop Culture complete with a 60-foot-tall HD screen and state-of-the-art lighting.

Such were the conditions under which 45 aspiring hip-hop artists from the greater Seattle area took the stage on Friday night, the whispered reminders delivered by show producers darting through the crowd. The 15- to 17-year-old musicians were there to perform songs they’d written and recorded in groups as part of The Residency, an artist development program designed to equip teens from underserved communities in King County with the skills needed to succeed in the music industry.

Over the course of three weeks, the students form their groups, workshop beats and lyrics and record two original songs per group in a studio on the 35th floor of the W Hotel in downtown Seattle, all while receiving guidance from a staff of teaching artists and a $600 stipend to cover expenses.

The Residency was launched by Macklemore & Ryan Lewis, MoPop and ArtsCorps in 2015; before the performances a jetlagged Macklemore, facetiming from an airport with a cup of mac and cheese, appeared on the SkyChurch screen to remind students to savor the moment. Residency alumni, some of whom performed during the Showcase, have gone on to major milestones, playing festivals like Upstream, Capitol Hill Block Party and Bumbershoot. Everyman MC Travis Thompson has seen the most success—the White Center-proud performer, who joined the program in 2015 and returned the next year as an intern, released a new album earlier this year, YOUGOOD?, which has already amassed millions of streams. This year’s lineup proved similarly deep.

Once it began, the showcase paired the warmth of a school talent show with the shine of an industry showcase. Teaching artist Tyrone “DJ Blizzon” Miller, who’s shared stages with Kendrick Lamar and Mac Miller, worked the decks at the back of the stage, keeping up the energy between performances. The stage stood only a few feet off the ground and the people immediately beneath it were friends, performers or both.

One student, Kevin Campos, had participated in The Residency the year before without saying a word, as one teaching artist remembered it. This year, as a member of the group VVS with five other students, he dispensed many a solid flow and released an entire LP under the name Kay C.

Samari had never rapped before joining The Residency but she brandished Cardi B-like boldness with her direct delivery on her group Carma’s first track. Joy Newton displayed similar charisma strutting the stage in hoop earrings and shades while rhyming over the funky bass line of Juice Mob’s “Get It.”

Jah Zilla, meanwhile, played with escalations of speed and volume, varying his rhythms less like he was checking off boxes to impress the crowd and more like he had a story to tell. His verse on Carma’s first song was one of the strongest of the night.

Performing with FEELZ, Tah-Jae Franklyn channeled the late Aaliyah with breathtaking vocal runs spotlighted by minimalist accompaniment. At least one audience member looked genuinely startled, the expression on their face spelling out what many in the audience were surely thinking: Damn that girl can sing!

The night ended on a hype note with Justus White-produced trap banger “Way Up,” featuring the chorus, “All of my people we trying to go way up/You can keep talking but you cannot stay up.” Students clustered at the lip of the stage, jumping and yelling along with the striver’s anthem. It was only a few weeks old but they knew all the words. After he finished his verse, Burien native Julio Villa crouched down and gestured to his peers to make way. He hopped offstage before disappearing in the crowd to join the jostling bodies, moshing to music of their own making.