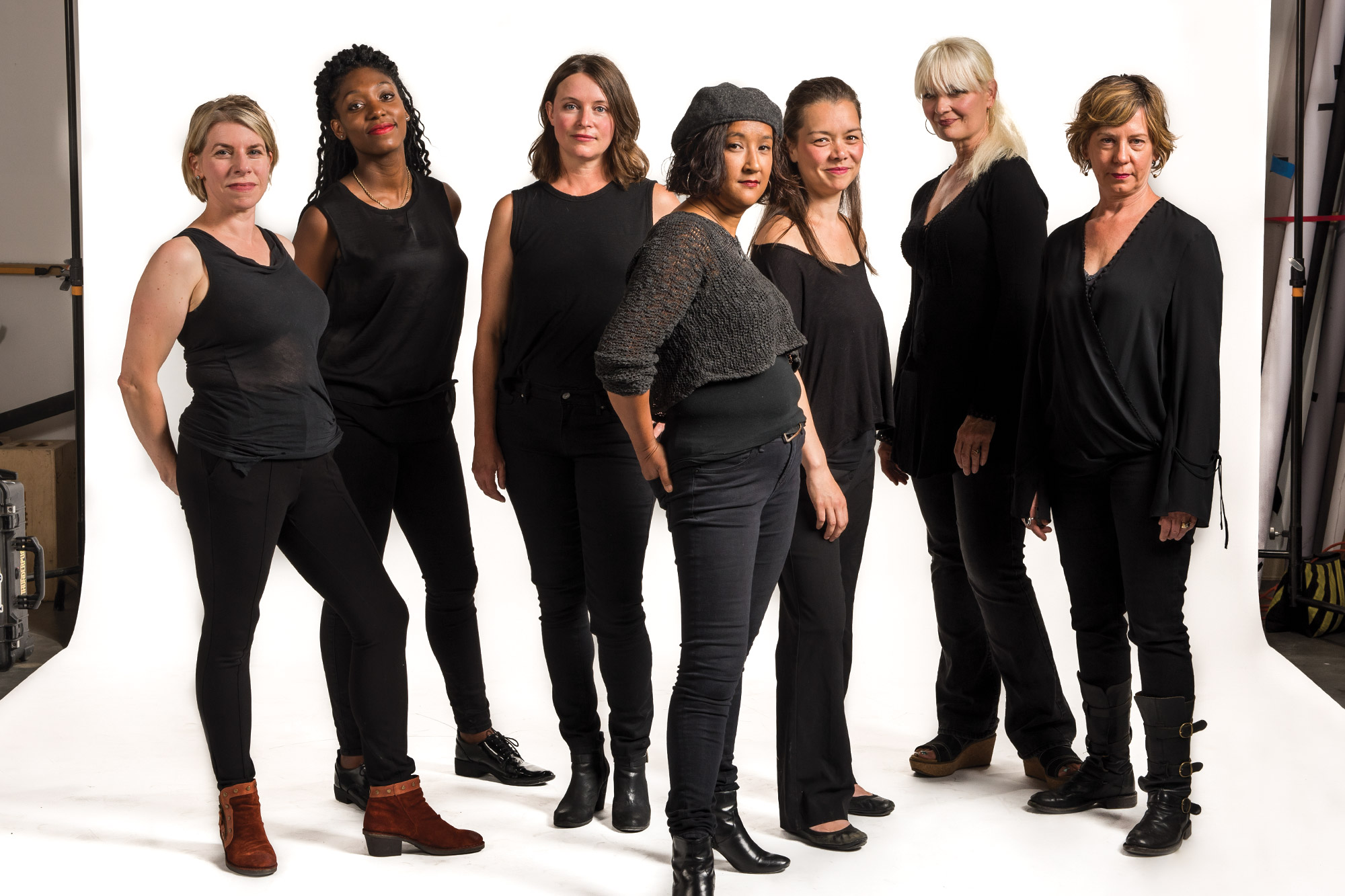 Sarah Harlett’s dark, viscous voice transforms even a nondescript event room at the Central Library into a center of political intrigue. “Now is the winter of our discontent made glorious summer by this son of York,” she says, the famous opening line of Shakespeare’s Richard III instantly animating her as that complicated, calculating tyrant. She spits her Ps, flips from honey to venom in a word. “Since I cannot prove a lover…I am determined to prove a villain.” This is a monarch so alarmingly magnetic you almost forget the severed heads and murdered children soon to come.

“I’ve been preoccupied for a while with how a democracy can slip into tyranny,” says director Rosa Joshi, cofounder of all-female theater group upstart crow collective, which presents Richard in collaboration with Seattle Shakespeare Company. “It isn’t all down to the tyrant. The people around Richard, out of sycophancy, desperation, greed, fear—they support his rise. They’re not stupid, they know what’s going on, but they make it happen.”

Like any good history play (a Shakespeare genre that upstart crow cofounder Kate Wisniewski brilliantly and accurately redubbed “political war plays”), this Richard III requires some backstory. Actors Wisniewski and Betsy Schwartz founded upstart crow in 2006 “because they were tired of waiting for the two [female Shakespeare] roles that showed up every season, and then competing for them,” Joshi says.

In early 2017 the company scored a big hit with a massive, two-part adaptation of Shakespeare’s Henry VI plays, called Bring Down the House, also coproduced with Seattle Shakes. Those plays spanned the Wars of the Roses, a violent, decades-long conflict that ripped 15th-century England apart.

“In those plays, I was struck by the presence of a young, nascent Richard III, and how that young man’s psychology is shaped, how his pathology is birthed, by what happens in that play,” Joshi says, describing how that political chaos and factionalism created a perfect vacuum to support the rise of authoritarianism. “In Richard III we get to see this dangerous despot manipulate, lie, charm, deceive and bully his way into power, and that seems very timely to me. I also think it’s important not just to present evil, but also to look at our own responsibility and culpability as a society.”

The company wasn’t planning to tackle Richard III so soon, she says, but the play’s modern parallels, coupled with a chance to expand Harlett’s gripping performance as Richard, presented too strong an opportunity. “After Bring Down the House I was such a defender of Richard, like, he’s not that bad!” Harlett says, laughing. “There’s a lot of bullying, name-calling, pushing Richard down, and everything that happens to him in those plays and every decision that he makes inform who I think Richard is.”

Who is Richard? is a deceptively complicated question, an answer for which Joshi and Harlett look for in the text, putting out of mind the “various hunches and lame arms and limps” of Richard performances past. Joshi’s minimalist aesthetic carries over from Bring Down the House, but that wartime show’s thumping, cast-driven Taiko drumming is replaced by an onstage musician-slash-ensemble member, Aimee Zoe Tubbs. Nine Bring Down the House actors return for Richard III, including Wisniewski (Margaret), Schwartz (Queen Elizabeth), Peggy Gannon (Edward) and Mari Nelson as the Duchess of York. Choreographer Alice Gosti is again working with Joshi to find what they call physical metaphors for the language, building on their workshop exploration of themes like power, tyranny, curses, dreams, sleeplessness. This abstract, natural yet supernatural world is where Richard claws his way to power, only to tip into paranoia once he’s achieved it.

Addressing the all-female aspect of upstart crow’s work requires nuance, acknowledging the reality while not presenting it as a novelty. Upstart crow doesn’t play in drag—there are no false beards or wink-y, gender-bending costume touches. They’re also not playing every character as female—they’re just doing the play, their way, to the best of their considerable abilities. As we’ve evolved from color-blind to color-conscious casting, so has our understanding that bodies on stage mean something and pretending otherwise serves no one. Seeing Richard in a female-assigned body plays boldly with our notions of power, violence and ambition and how we conceive of different genders’ relationships to those traits.

The casting also presents an interesting opportunity to reinvestigate a narrative aspect of the play often taken for granted—namely Richard’s “wooing” of Lady Anne (Porscha Shaw), who he convinces to marry him even though he’s murdered both her husband and her father-in-law. That scene is traditionally presented as one of seduction, which for female audience members often requires a suspension of disbelief that Richard’s charisma suddenly outweighs his violence. While seduction may still be Richard’s tactic in this production, exploring that scene in a female-led room makes a difference. “The women in the play have very few choices, and they’re trying to survive,” Joshi says.

“If these plays are really about our shared collective humanity, if these great classical works are about the deepest core of who we are, then who represents that on stage?” Joshi says. “Who visually are we looking at, who spiritually, emotionally, physically are we looking to in order to tell them? Who owns the story?”