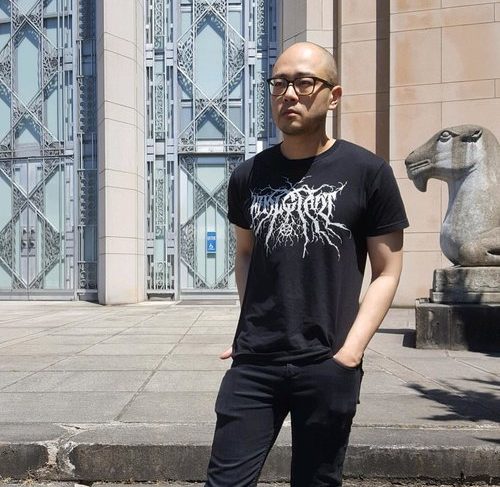 Two years ago my friend saw Bjork driving down Madison in a silent Pontiac, shielding her face with a bible pamphlet. “How did you know it was Bjork?” I asked. “Who else could it possibly have been?” he said. I agreed. Nothing has reminded me so much of this experience than Richard Chiem’s You Private Person. The collage-like short story collection quietly boils with energy and a mysterious sense of import.

Person was originally published by Scrambler four years ago. Its cover was a candy-colored swirl of cars, a reference to the many cars in the book, aptly symbolizing Person’s particular definition of privacy. Cars provide freedom and autonomy, but also separate their inhabitants from the world. Privacy is powerful but isolating, potentially dangerous when it prevents human connection. Fittingly the final story in Person is called “How to Survive a Car Accident.”

This new edition of Person was put out by Sorry House, which delightfully labels the covers of all its publications “a Sorry House Classic.” The cars from the first edition of Person are back as squiggly red MS Paint line drawings on a stripped down mid-century paperback-style cover. The text has been edited significantly, formally resembling a collage more than a traditional short story collection, as it originally did, and free of original edition’s typos. 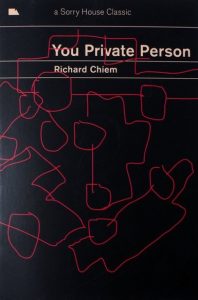 Person is composed of short prose pieces, some individual and some included in groups of related stories called  “Sociopaths” and “Animal.” Catastrophic and miraculous events are shrouded in the weirdness of everyday life—just the right amount of weird, employing Lynchian subtlety and implication rather than a Tom Robbins sledgehammer of arbitrary wackiness. Knowing absolutely that something unseen and otherworldly is occurring is almost always more thrilling than a direct description of the otherworldly.

How do you know magic is happening? There’s no other option—the story couldn’t function without this unstated truth. Do a boxer or a break dancer (one of whom says he “wants to be unbearable,” and the other that he can make his body “a catastrophe”) have supernatural physical powers? Did Bill Murray, wearing a red trench coat over licorice-red jacket present one of the protagonists with a dollar and tell him no one would ever believe it? “I’ve heard Bill Murray does play pranks on people though. He does pranks all the time. I am not sure what did or did not happen last night. But I have this dollar.” It is prefaced by this information, a characteristically crucial and understated detail of the story: “Transcript from a voice recording.”  From who? For what? As in many well-written poems, the end takes the reader back to the beginning, curiosity piqued.

Person is uniquely quiet and enveloping, maintaining a feeling overall like one of its many instances of submergence—in icy winter pools, hot tubs, showers, the slow-motion horror of a car accident. Chiem’s spare, carefully chosen words, the trance-like calm of many of the characters, create tremendous tension in combination with the violence of the narratives.
Most of the characters in Person seem ready to snap. A man discovers that the guy who molested his girlfriend as a child works in her building, so he and a friend hunt the guy down and push him off a building. Somehow even more unsettling, he then cooks his girlfriend an entire suckling pig. A couple erupts into insults and thrown furniture, then pretends nothing is wrong just as violently.

What invites my description of Person as magical realism is that it’s hardly “realistic” for everyone in any given scenario to seem like they might commit murder at any moment (one hopes). But in the world of Person it’s completely realistic—nothing else would make sense.
Celebrate the new release of You Private Person on Oct. 12 at Gramma Poetry.