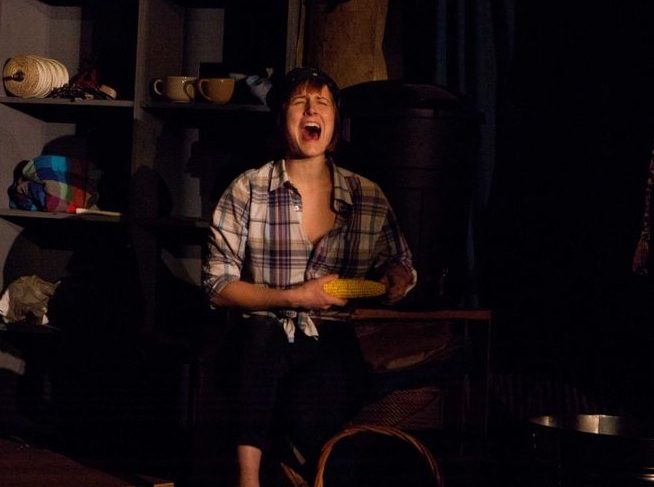 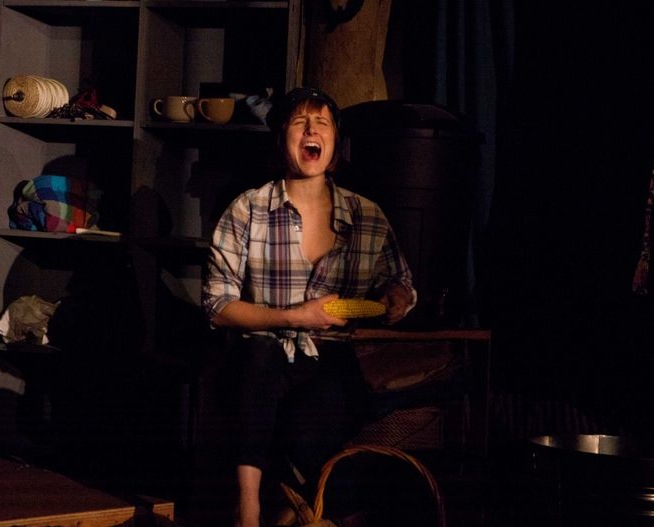 Directed by Satori’s Caitlin Sullivan, reWilding’s menacing and sometimes confusing story is set in a society where the past tense has been outlawed, along with cursing and loud sounds. The society is only reachable by outsiders who are desperate for refuge—who have run away from home or witnessed something too terrible to forget.

The production begs to be experienced rather than observed. In the wake of the show it seems impossible to unpack the arc of the plot without making the story sound trite. (A lost girl enters a self-contained society and disrupts the daily life of its inhabitants.) But the impact of the production is not in the story itself, so much as in the sensory experience of the production. Part Where the Wild Things Are, part Plato’s Republic, the play is driven by the tension between order and the desire to be free. Music, movement, food (the audience receives soup and bread at suppertime) and scenery close enough to touch allow the audience to enter the world of reWilding, literally transforming the audience into a part of set.

Playwright Martyna Majok’s script is lush and imagistic. Much of the show’s dialogue overlaps, creating a musical chorus of voices. This highly choreographed vocal staging is enchanting, but sometimes heavy handed, especially in the fast-paced second act when characters echo one another more than not. But the script shines most in its starker moments—a couple looking out over dark field; two young boys breaking the laws of quiet by exercising their loud voices for the first time.

John Leith nearly runs away with show playing Chicken Man, a bearded middle-aged Soviet man who is doomed to repeatedly retell the story of the traumatic car crash that left him crazy. Leith’s portrayal of Chicken Man shifts from boisterous to damaged over the course of the play. His character’s demeanor calms down as the rest of play’s momentum accelerates. Chicken Man’s final moments on stage come out in a remorseful whimper, a far cry the brash and unsettled man portrayed at the beginning of the show.

The central character Edith, played by Lora Beth Barr, is a curious and naïve young woman whose past remains a mystery for most of the show. Barr is convincing in the role, wide-eyed and gun shy of her new environment, but Edith seems the least developed out of the eccentric cast of characters.

The dense set (Clare Strasser and Montana Tippett) of reWilding is the show’s most impressive feat. It transports the audience out of Inscape and into an apt encampment for a troupe of existentially burdened vagrants, working with the writing to spark the imagination of what exists beyond the walls of the theatre. Bare structural posts are transformed into tree trunks using texturized and painted canvas, an effect that’s believable even to rough touch. Loose, dark brown soil covers the theatre’s floor entirely and tracks through the halls of Inscape during intermission via the audience’s shoes. The stage is divided into a labyrinth of tents and pathways constructed from rows of sun-bleached bed sheets that rise and fall with the help of an intricate pulley system. During a storm rain falls from the ceiling, backlit by an elaborate lighting scheme that easily changes the set from dawn to day to dusk to blustery night. Vines crafted from lichen-green fabric hang off of nearly every surface of the theatre. In the center of this organized chaos stands a clearing where most of the play’s main action takes place. The audience watches from tiered platforms on the edge of the clearing sitting on folding chairs, benches and pillows. Behind them players move about in whispers, announcing their offstage movements with the glow of their flashlights and lanterns shining through the fabric dividers.

But it’s the offstage action that sets much of the play’s tone. The commotion of characters out of view overcasts the show with a sense of menace that lingers even after the house lights rise. Seattle band This Bitch Don’t Fall Off plays their live, original old-timey score throughout the show, sometimes out of sight, sometimes as just a single guitar player acting as town troubadour.

The music, the movement of the cast choreographed by dancer Markeith Wiley and the 360-degree set elevate the show beyond the common play and up to a feat of mixed media art. The murkiness of a narrative arc seems irrelevant, as so much of the impact is in the surprising way that the play works as a whole without the plot as a driving force. Go see it. Enter the world of reWilding. See if you don’t end up lost, slightly scared and wondering how it might feel to start your life entirely anew.

ReWilding plays through March 17 at Inscape Arts. Get your tickets here. Photo by Alex Garland.