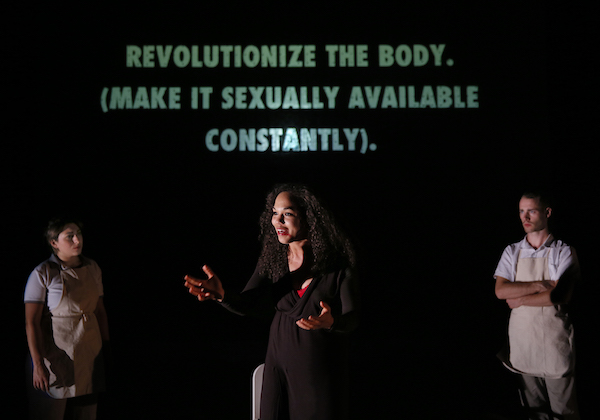 Thank you, Alice Birch, for not writing a dramatized think piece about feminism. In Revolt. She Said. Revolt Again, the British playwright exchanges female-centric acecdotes for the messy, absurd reality of women’s lived lives in her play-cum-thought experiment. She builds on the work of fellow British playwrights—the brash, zero-fucks-given attitude of Sarah Kane and the fearlessly sexual, fragmented form-busting of Caryl Churchill—to create an intentional free-for-all, untethered from reality in a way that makes it all the more real.

Washington Ensemble Theatre presents the play, which isn’t a narrative but a series of vignettes, threaded together with images of melons, bluebells and bodies, delicate verbal stitches that loop back to bind the play together and us with the play.

Revolt. had a successful stateside debut at SoHo Rep earlier this year, but premiered at London’s Royal Shakespeare Company in 2014. That commission was prompted by the famous and wholly irritating quotation-turned-aphorism, “Well behaved women seldom make history.” Birch wrote the play in a fury in three days.

The six-person cast—four women, two men—is always visible, coming on and off stage from the small dressing tables on either side of the playing space where they spend their down time. It’s a show in shades of black, white and red, with supertitles for each scene projected on the slick white backdrop.

To start: Revolutionize the Language. (Invert It). A couple about to get busy is derailed when she reroutes his dirty talk—preferring “make love with” over “make love to”—and turns the language often reserved for women’s bodies, penetrative and dominating, back on him. It doesn’t go well.

A female employee is calmly requesting a change in her work schedule. “You’re being very obtuse,” her frustrated boss says, after promises of vending machine snacks don’t change her mind. “I’m being very clear,” she says.

A woman being chastised for exposing herself in a supermarket (“We literally cannot resell those melons”) drifts forward to address us. Or herself? “Where my body stops and the air around it starts has felt a little like this long continuous line of a battleground for about my whole life, I think,” she says. The supertitle: Revolutionize the Body (Make it Sexually Available Constantly)

When the shouted punchline (to a never-made joke) is “RAPE!” a character earnestly responds, “That is undoubtedly funny.”

The scenes become progressively less realistic and more unhinged, the linguistic collagen breaking down until it splats into a shambolic melee of overlapping lines and ideas, supertitles stacking one on top of another and another and another. It’s insanity.

Bobbin Ramsey directs the piece with a sense of joyful freedom and anger, and it’s the best thing I’ve seen at WET in a while—funny but not pedantic, heavy enough that it’s not fluffy or predictable. There are some less-successful moments and scenes occasionally drag a tad long. A dance-break to “Single Ladies” felt self-consciously clever and redundant, as did the use of “You Don’t Own Me.” Both songs slowed things down rather than energizing them, but those moments were the exceptions, not the rule, and the frenetic pacing combined with the talents of a crack design team resulted in a bizarre, gorgeous mess.

The cast was strong (if unevenly so), but Anna Kasabyan brought marvelous honesty and texture to her varied characters (if you can call them that—they’re more ideas of characters that exist in and for one moment, in service of one idea), as did Ayo Tushinde.