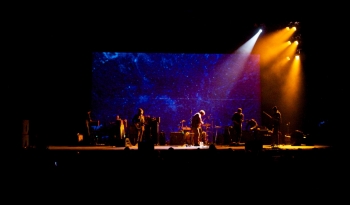 “I’m in a nostalgic, self-mythologizing mood right now,” Robin Pecknold told the Paramount audience midway through Fleet Foxes performance Tuesday night. It was meant as a goof, Pecknold momentarily ribbing guitarist Skye Skjelset, but like much of his banter, was equally sardonic and spot-on. With each masterful performance like Tuesday’s—the first of two at the Paramount this week—Fleet Foxes further ensconce themselves atop the modern pop-music pantheon.

What makes them great, as demonstrated Tuesday night, is the rare commingling of concept, technique, and execution. This is the same formula that makes any great work of art (“great” as in significant, groundbreaking, a la Van Gogh’s Starry Night or Van Morrison’s Astral Weeks, which, not coincidentally, played over the Paramount PA before and after the show). Conceptually, Fleet Foxes aimed at nothing less than transcendence. From the first note of first song “The Plains/Bitter Dancer”—sung by multi-instrumentalist Morgan Henderson, slowly eliding into a baroque, four-part vocal crescendo—the band’s harmonies were more aligned with Ladysmith Black Mambazo and Gregorian chant in their evocation of the divine than the pleasant pastoralism of Crosby, Stills, Nash, & Young. At the fore was Pecknold’s voice, forceful but softly folded around his lyrics, rendering each syllable clear and bright, the lodestar guiding the ship. Luxurious and textured, voices and instrumentation (electric and acoustic guitar, bass, keys, and mallet-beaten drums, plus Henderson’s rotating palette of upright bass, flute, tambourine, saxophone, and violin) merged seamlessly.

The band embellished standard pop-music technique—the gentle acousticisms of their trendsetting early work; wailing, Phil Spector-style wall of sound; soaring classic rock via My Morning Jacket—with weird song structures, noisy skronk, and those singular, heavenly harmonies. Pinning the band to easy touchstones like the current folk-pop trend or studied ’70s-folk flashback was impossible. As reflected by the scope of Helplessness Blues, their second album, released in May and the source of most of the evening’s material, theirs is a sound all their own, timeless and genreless.

Above it hovered an air of utter virtuosity. The precision required to execute these complex, multi-layered song structures was nearly superhuman. Music so finely wrought demanded rigor as well as feel, a difficult combination to pull off in concert. Songs like the opener and, later, “The Shrine/An Argument” and older tune “Your Protector” saw band members switching instruments mid-song. Sometimes the band missed its mark, as on the diffuse opening of “Bedouin Dress.” When it all came together, as on mid-show run of “Sim Sala Bim,” “Your Protector,” “Ragged Wood,” and “Montezuma,”  the effect overwhelmed: Fleet Foxes made astonishingly profound music.

Not a small amount of that profundity came from the words Pecknold sang (which deserve their own dissertation elsewhere). The mundanity of his self-deprecating, hometown-bound banter couldn’t diminish the insight and imagery of his lyrics. Some songs dwelt in classic mythology, referencing archetypal locales like “the old stone fountain,” “Mykonos,” “the quivering forest.” By association, others mythologized friends and family. In each Pecknold evoked worlds, histories, characters, relationships. He left unanswered age-old questions in “Blue Spotted Tail” (“Why is life made only for to end?”) and “Montezuma” (“Oh how could I dream of/Such a selfless and true love?/Could I wash my hands of/Just looking out for me?”). Swaddled in gorgeous delivery, these troubles weighed heavily.

Then there was the slice-of-life narrative of “I Let You,” a song Pecknold debuted for the hometown crowd during the encore—alone, center-stage. With aching detail, it told the story of a broken romance, mostly from the perspective of one difficult night, stranded at a dwindling party after city buses stopped running. Its stark intimacy contrasted with the grand thematic sweep of the band’s other songs.

“Helplessness Blues,” the final song of the show, stands as the most articulate expression of post-9/11 disillusionment to emerge from the pop-music landscape. It began with a confession defiantly anti-individualist, even anti-American:
“I was raised up thinking/I was somehow unique/Like a snowflake among snowflakes/Distinct in each way you can see/But now after some thinking/I’d say I’d rather be/A functioning cog in some great machinery/Serving something beyond me.”

Then the anxiety, and the hope: “But I don’t know what that will be/I’ll get back to you someday soon, you will see.”

Given the band’s youth, ability and trajectory (these shows at the Paramount were their biggest yet in Seattle amidst a hugely successful world tour), chances are good that in due time we’ll hear Pecknold’s answer.