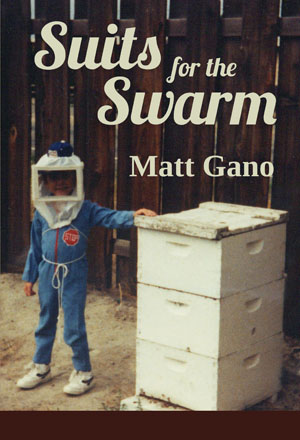 Seattle poet Matt Gano’s debut book of poems Suits for the Swarm is evidence that judging a book by its cover is not always a bad thing.

The book’s cover shows a faded photo of Gano as a child, dressed in a royal blue jumpsuit, white sneakers and a mesh beekeeper’s hood. His left hand rests atop a three-tiered beehive, nearly as tall as he is. In the photograph the little boy smiles, apparently unafraid, if not unaware, of the danger a large hive of bees might pose to anyone within spitting distance. Like the cover photograph, the book’s poems are rife with a bold absence of fear in the face of obstacles—both physical and emotional.

At just a hair over 60 pages, Suits feels like a concise lyrical retrospective of Gano’s capacities as a spoken word artist and a poet writing for the page. Gano has competed at the National Poetry Slam multiple times and is a veteran of the Seattle spoken word scene. The conversational cadence and punchy tone of many of Swarm’s poems reflect Gano’s long relationship with live performance: some poems practically beg to be read aloud. This is not to say, however, that the poems feel trapped on the page. Instead, through the use of precise lineation, the forms of the poems further inform the text’s language, emphasizing and articulating Gano’s unique, musical flow.

Much of the book’s first half is a reflection on Gano’s own childhood. The poem “Torpedoes” is an ode to the author’s brother and to the pleasant simplicity of life in a small town: “My love for my brother/came with cuts/Thin gashes on our shins/chasing grasshoppers/through tumbleweed.”

The second half of Swarm is rooted in the urban present. The voice is more adult, with a comedic edge as cutting as it is funny. “When the clouds burn off/and the pavement dries/it seems the sidewalks/are as tired of being slick/as the rest of us,” reads “New Heat.” The subtler poems are the highlights of this fine debut collection, allowing the reader to relax into the spiraling imagery without being overwhelmed.

Suits for the Swarm is available to purchase here.