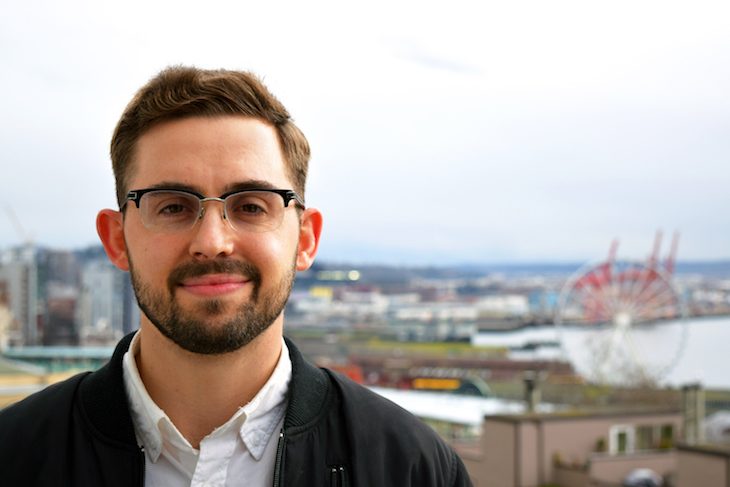 A photo hanging at the Center for Architecture and Design depicts a stack of houses in bright cyan, yellow and pink contrasting the towering mountain wall behind. This is Jalousie, a neighborhood in Port-au-Prince, Haiti, known as the most-photographed shantytown in the world.

“The government gives the inhabitants bright paint to make them feel proud of where they live,” says Garrett Nelli, a designer at Seattle firm NAC Architecture. “But many of them don’t have electricity or plumbing. Also, this photo is taken from a recently completed four-star hotel. So maybe the reason the government is providing the paint is so that their clients’ view would be more appealing.”

The photo preludes the exhibition In the Public Interest: Redefining the Architect’s Role and Responsibility at CAD. The exhibition is the visual culmination of Nelli’s yearlong project, spurred by the American Institute of Architects Seattle’s Emerging Professionals Travel Scholarship he was awarded last year.

Nelli, who moved to Seattle from Tennessee, wanted to study how architecture can impact society through visiting six “case studies” of socially conscious architecture. He visited Italy’s first ethical bank, went to an art school in LA’s Skid Row and talked to students in Alabama working on a project for low-income housing and mortgages to ensure people can own property that doesn’t lose value.

When we meet at the Center for Architecture and Design to talk about the exhibit, which showcases his research via photos, wall texts and invitations to contribute thoughts on pieces of paper, Nelli explains that the photo of Jalousie shows that “nothing is neutral.”

“Our built environment is a manifestation of the values in our society,” he says. “It has the power to oppress and to belittle, but it also to uplift.”

With this show, Nelli hopes to spark a discussion about how architects can make a greater social impact. He leads us to a series of photos showing a spiky, bright, white and blue building, the Gheskio Cholera Treatment Center in Port-au-Prince. “A local organization reached out to this U.S. architecture firm and non-profit, MASS Design Group. Because of that, it now has the lowest mortality of any cholera treatment center in the country.”

What’s to say a simple square building would’ve not had the same effect?

It wouldn’t have, for a couple of smart design choices. For one: This building is naturally ventilated. There’s stagnant air in many hospitals, so diseases stay in the building. The architects also worked with engineers to come up with a new way for the contaminated human waste to not get in the waterways like before.

These architects are working with or for communities that are not theirs. How can you avoid being the white savior architect?

It’s tough. You come in as a specialized expert and the playing field is uneven. It’s really easy to go in and think you have all the answers. I think you have let go of that ego and become not an implementer but someone who listens to what people want. But yes, I had similar concerns going to see the work of MASS, a group of Harvard students, the elite of the elite. But 97 percent of the production costs stayed in Haiti and they employed 360 Haitians throughout the project.

Could architects do other work to avoid building for others in the first place?

Yes. MASS specifically hires local people as a way of transferring knowledge and to make sure people can create business for themselves. Also important to note: You don’t have to go to Africa or Haiti to find those conditions. In rural Kentucky, where the majority of the county didn’t have access to running water, I helped build a water kiosk. It sounds simple, but it was also a way to engage the community.

Besides getting them fresh drinking water, we also created a place to house the farmers market. It also became a place to educate the public about health issues relating to water and other things such as mining. Since then, the farmers market and the number of people visiting doubled in size.

What kind of role can architects play to create change in Seattle?

One thing we can do is try to accept that corporations are going to fulfill their goals, which is to make money. We can play a role in the city without them, too, by helping shape legislation, understanding zoning and most importantly making sure we are defending our communities — playing more of a public advocacy role.

The architecture world needs to change in other ways as well. #MeToo is sweeping the architecture field, which is still very much a white man’s world. What’s your take?

If you’ve been in the profession for 50 years and you think everything’s fine, you’re not paying attention. It’s a big problem and a large part of the discussion of how the architecture world needs to change. The profession is way behind the times. Offices should evolve and be places where women and people from different backgrounds can flourish. We need to be more self-critical, think about how to address the needs of many, and how we communicate. I hope Seattle can lead the way for the rest of the country. We’re living in such a progressive city. We’re ready for it. I hope we don’t miss the boat.

In the Public Interest: Redefining the Architect’s Role and Responsibility runs through May 26 at the Center for Architecture and Design. On April 26 a documentary about the construction of the GHESKIO Cholera Treatment Center runs at AIA. More info here.