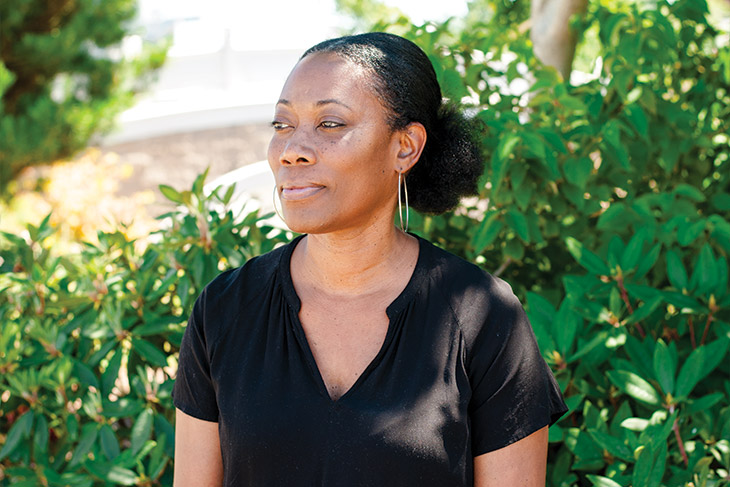 Renee Simms is a fiction writer, essayist and professor of African American studies who moved to Tacoma in 2011.

How does the body remember a wound, its skin split open, the sting and smell of ruptured flesh?

Years ago, I lived in a city people called the murder capital and Stonehenge. A place that had ritualized arson and trenchant poverty. A city that braved the crack epidemic. A place where a woman was beaten on a public bridge until she leapt into the river to her death.

Those events, although in the past, still feel raw, open and bloody. Even today, I am hurt by people who snicker about my hometown as if violence exists only there. From Tacoma I mine these wounds through writing, determined to illustrate my hometown’s complexity and to add to the intellectual tradition of writers raised in that place.

Detroit had tender qualities, too. There were lush parks and Gothic architecture. I met white-haired men who shared important history about the Black Arts Movement with me inside tucked-away cafes. My friends and I hung out at Anthony’s house, which was not far from a pawn shop, near the old Tiger Stadium before the stadium was demolished. We had good times on that forgotten street in that house that no one wanted to live in except for Anthony, a nerdy Black dude who smoked Djarum cigarettes and read books well into the night.

Have you ever walked down a street and past a store that you’ve walked down and past a hundred times only to discover that the store is now something else? And you swear the store was there the day before? You swear it was a barbecue joint with bulletproof glass at its counter and aged linoleum floors, a takeout spot with food swimming in sauce. You try to recall the name of the place but it escapes you. And it escapes your friends, too, who were there and who should be able to bear witness, but your collective memory is fading, and so y’all start discussing what was next to the barbecue joint—a different store that’s now gone, too…

Where are the monuments and archives and storytellers who will tell passersby what stood here years ago, before the street morphed overnight into This?

The Detroit I knew in the 1980s and 1990s feels more and more each day like a vanished barbecue joint. Last year on a visit to the city, a friend and I laughed about signs posted in Cass Corridor—no longer called that—which had pictures of lost dogs. My friend said, All the dogs were lost when I lived here, and I laughed and told her about the pack of stray dogs that roamed the railroad track outside my 10th-floor window in the twin apartment buildings known as Lafayette Towers.

When I moved to Tacoma in 2011, it reminded me of Detroit. Gritty with industry and gray skies for a much of the year. Some of their houses look similar. And the best artists from both towns create from their gut—memories of systemic injury, harm, danger and neglect serve as their creative inspiration.

I wasn’t in Tacoma during the hard years. I’ve heard about its gang warfare and white flight, but I didn’t live that history like artists who grew up in the city. I arrived in Tacoma during its gentrification, a fact I try to remember when people want to call me a Tacoma writer. Although I’m creating here, I don’t claim to be from here. There’s a difference.

As a transplant, I listen to the narratives of artists who are from here and I follow their lead. I’ve tried to learn the culture. I’m sensitive to their wounds. I know how it feels to be from a city that has been ridiculed for years. Oh, now this place is cool? such an artist might ask. What about Anthony who was creating on a desolate block back when nobody gave two fucks?

But I like this tension between Tacoma’s past and present, between artists originally from elsewhere and those who are homegrown. We are all figuring out what Tacoma can be. How can we create an equitable arts scene where artists are not only funded but have stakes in how residents are educated and governed? That takes thinking outside of the box, and for me, that requires space in order to think. I like that Tacoma’s streets are empty late at night, that there are places where you can be alone.

It’s in those empty spaces in Tacoma that I’m writing a speculative crime novel set in Detroit. My character is literally trapped in the gears of industry. I’m contemplating cruelty. I’m thinking of how we exploit the working classes and the role that drugs play in that exploitation.

Many Tacoma artists are concerned with similar issues. Sometimes, I feel like I never left home.