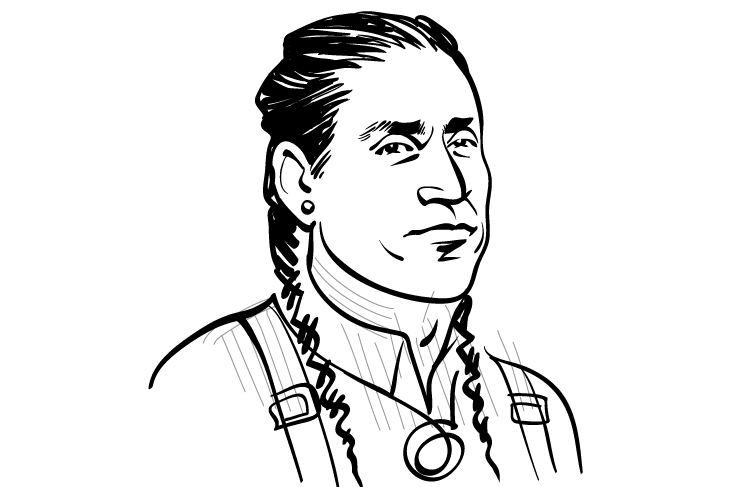 “There’s killer whales going HAM right now in front of my house!” Nicholas Galanin is on the phone from Sitka, Alaska, where he says the weather is transitioning to winter and, apparently, the orcas are having a ball. Galanin was born and raised in this remote island community, the son of several generations of Tlingit artisans, and remains immersed in the landscape. He mastered jewelry-making and silversmithing in London and New Zealand and he’s taken his mixed-media artistic output worldwide, participating in recent group shows in Seattle, San Francisco and Brooklyn and an upcoming residency outside Milan. His new band, Indian Agent, which includes Seattle beatmaking wiz OCNotes, released its debut album last month on Galanin’s own Homeskillet Records. The day after we talked, he dedicated a traditional cedar-trunk canoe he and four others spent 10 months building.

I imagine living in Alaska as a very physical life of subsistence and survival. But living as an artist is a life of the mind, interpreting emotions and dwelling in symbolism and meaning. The two seem antithetical.
Historically, they’ve never been separated. The canoe that’s being dedicated tomorrow, that developed over necessity with where we live; we go out and feed our families and travel to other communities and even go to war. It’s ancient technology and engineering for sure. But a lot of them nowadays end up inside buildings and institutions, hung upside-down. That’s a wonderful example of survival and relationship to place, with understanding and working with materials and artistry.

How do you maintain all these different projects around the world while living in such a remote place?
It all happened really organically throughout time. These projects are all slowly coming together and people are realizing that they’re all woven together in a special way. I’ve got this Minor Matters Books monograph coming out. I imagine it as inclusive of all my projects, including music. I speak about my work and the things that inform it, starting with the land. And the continuum—my father is an artist, my uncle is an artist, and I do work with apprentices. I have a [Tlingit-style] house post in my shop at home and my cousin Lee is working on that with me. That’s a customary form of education in our culture, especially with the visual art we create. The beauty of that is that Lee’s father taught me, so in a sense this is getting passed to his son through his work with me.

The adaptability demanded by living in Alaska is probably good as an artist.
Oh, certainly. What I love about having no real set medium or standardized way of working is that there’s never a block in my creativity. Things aren’t forced, you know? If I don’t feel like recording sounds, I won’t sit down and do it. I have other projects that could use the attention. That seems like a good process of ensuring I’m not forcing things for deadlines.

So much of your work deals with your Tlingit identity, and it’s gaining recognition not just for your understanding of your collective history but also for your own unique point of view.
Based on current noise and situations in our nation, it’s hard not to engage from these spaces. Doing engagement through creative work, art and music, is one powerful way to open dialogue with the communities—and I don’t have to be there tirelessly continuing that dialogue for it to work. Because it is tiring, to be expected to educate someone continually, as if it’s information that’s expected of me to provide, and for someone to think they can just have. The irony is that a lot of historical anthropology is homogenized information from elders in our indigenous communities—I’m talking about anthropological texts from Tlingit history—and it has to go through this filtration to become true or of use, and if I want to access it I have to go through this system that is the university and pay for it.

Doing this work with indigenous youth, my younger cousin who’s apprenticing, it’s a valuable opportunity because we’re not operating in that system. We’re not applying to a university and paying tuition. I do teach at University of Alaska, so it’s not that I’m unfamiliar with that, but I love this idea of sharing—and not doing it through institutions but through my community.

Indian Agent celebrates the release of Meditation in the Key of Red with a Seattle release show in November.
Stay tuned for details.