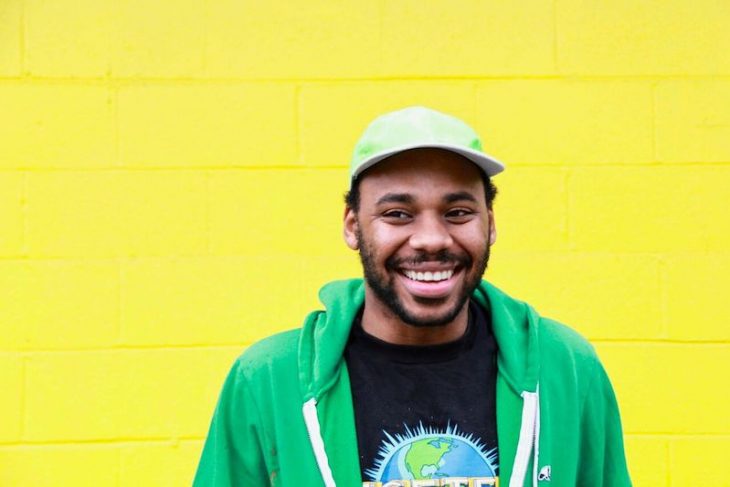 Christopher Paul Jordan reaches beyond the canvas to construct space for reconnection.

On the exposed drywall in Christopher Paul Jordan’s basement studio in Tacoma, the words DON’T WAIT are written in red on painter’s tape. They peek out from behind a recent painting that Jordan shuffles into view, depicting a floating white basketball backboard, its red square framing the hoop. A brown box covers the rim. The suggestion: No shots possible.

“Did you know there’s a ‘take down the courts’ movement?” Jordan asks. His paint-splattered green sweater and a colorful array of spray paint cans punctuate the studio’s sober palette. “People who see basketball courts as drawers of crime. It’s entrenched in anti-Blackness and fear of urban youth. Disturbing.”

Jordan is, in his own words, a terrible basketball player. But since he made this painting, basketball hoops have been showing up in his life. He notices them in salvage yards or face-down on the street. Recently he created “Home Court,” an LED-integrated basketball half-court, with longtime friend and collaborator Kenji Stoll and youth from the Tacoma Bay Terrace affordable-housing community.

A print of a defunct hoop will feature prominently in Jordan’s first solo show, Latent Home, opening in November at Kittredge Gallery in Tacoma. The title of the show stems from “Latent Home Zero,” a public installation the Seattle Art Museum commissioned from Jordan for Seattle’s Olympic Sculpture Park. The piece, in which Jordan filled a retro-style public binocular telescope with stereoscopic images exploring the historic displacement of Black people, will be on view at Kittredge Gallery. Concurrently, Jordan will showcase a virtual experience via online gallery Deep Space.

“Don’t wait” was the warning that Rodrigo Valenzuela, artist and assistant professor of photography at UCLA School of the Arts and Architecture, gave Jordan during a workshop earlier this year, urging the 27-year-old artist to apply for the Neddy Artist Award. “It seemed too big for me,” Jordan says of one of Washington State’s biggest art prizes. “I’m not well-known in Seattle. I thought I’d build up to it.” He applied and ended up winning the prestigious award of $25,000 in the painting category this summer.

No single medium can adequately describe Jordan’s practice, which includes installations, photographs, sculptures, stereoscopic images, digital imagery, graffiti, social justice work and a novel “color inversion” technique. The latter makes the colors of “High Jump,” a mural of a pole vaulter Jordan painted with Stoll on the SODO tracks in Seattle, at first seem off. For the image to resemble reality, visitors must use their phone cameras to invert the color system. Through these multiple layers of mediation, Jordan calls into question the legitimacy of the image and the authority of the artist and the viewer, who he says will inevitably “project their unchecked values, problematic projections and limited associations” onto the image.

But Jordan is not here to cater to any presupposed white audience. “I’m interested in the ways we as Black people experience each other,” he says. “There’s this white-supremacist satellite from which all of our images and stories have been bounced back to us. How do we construct new satellites and channels for conversations, find places to connect?”

Jordan creates those channels within his paintings, as well as in actual space. Last year, he organized and curated #COLORED2017, which took over an entire building in downtown Tacoma with work by Black artists from the U.S. and Caribbean and catered specifically to a Black audience.

“There’s so many art shows where Black artists are put in the position to broker Black experiences to white audiences. They are never centered on Black audiences.”

#COLORED2017 will travel to Trinidad and Tobago next year. Jordan is channeling $10,000 dollars of his Neddy prize toward its organization.

“Chris is all about facilitating and creating chances for others,” says Stoll, an artist and program administrator for the Tacoma-based youth organization FAB-5. Together, they’ve created more than 10 murals with local youth. The duo also co-directs the community art center FAB-5 and is in charge of artistic outreach and low-barrier grant opportunities for the Eastside Community Center, opening next year.

“Everything Chris does comes from a deep love for people and their humanity, even when it’s messy,”  says Satpreet Kahlon, an artist and curator who included Jordan’s work in the group show QUOTA at SOIL this summer and curates Deep Space. “With that comes a desire to see us do better and be better, and he tries to encourage that in his work.”

He’s also pushing himself into new, demanding directions. As seen in one of his studio works, Jordan renders his conceptual and formal study through concave lines weaving through a blurred landscape. He traces these lines with spray paint, which evaporates the styrofoam that forms the painting surface. “I’m re-politicizing the landscape,” he explains. “The lines hark back to a nostalgia for historical homelands.”

“For some folks, graffiti is a reclamation of public space, identity and history,” he continues. “Others see it as a scar on a pristine environment. That resentment harks back to anti-Blackness.” He stops to think, let his ideas tumble around. “In a way, styrofoam is like white supremacy. It crumbles and terrorizes the natural environment. It’s nearly impossible to eradicate.”

As a young artist making digital work a decade ago, Jordan was routed to painting through graffiti, now echoed in his current use of spray paint. Recently he’s also reached back to his early digital work, sifting through old Photoshop files and negatives dating back 10 years. The process is a bizarre trip down pre-gentrification memory lane.

“It’s the only way I can describe how I see my environment changing,” he says while viewing digital scans of old photos taken from the roof of his parents’ house. They depict an architectural salvage yard called Jones Glass. “The place in the photo resonates very differently now,” Jordan says. “It’s more harrowing. Increasingly, the yard contains remnants of homes of my former neighbors.”

Jordan grew up in Hilltop, the historically Black neighborhood in Tacoma, the son of a pastor and a teacher, with his five sisters and brothers, among them singer-songwriter Will Jordan. When he walks around Hilltop now, he sees the scars of gentrification, another type of forced displacement. It’s for those displaced that Jordan wants to foster a homecoming across literal lineage into a figurative global network. The pieces in Latent Home belonging to his neighbors, he says, whom this conversation is ultimately for and about. The actual experience of Black people is at the center of his practice.

“We’ve been everywhere,” he says. “But where do we go next?”