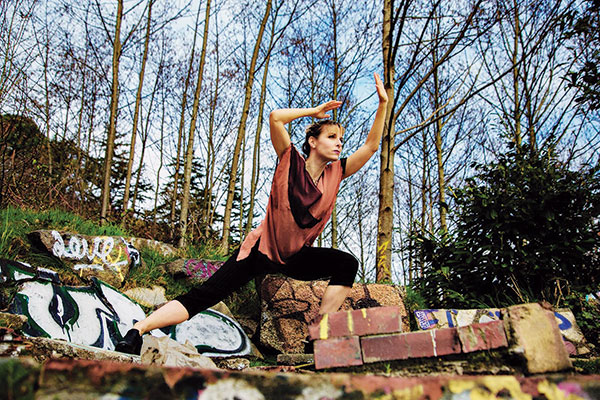 To Karin Stevens, knowing where you’re going means knowing where you came from. Her company’s new dance work, Record of the Anthropocene Movement, investigates the changing landscape—natural and political—of the Seattle area, from failed school bussing policies to the city’s extensive topographical regrade.

The Five Elements of Chinese philosophy—water, earth, fire, wood and metal—provide a metaphorical structure for creating movement around historical events. Stevens built the choreography from actions associated with each element in Chinese tradition, for instance “thrusting” for wood or “descending” for water.

“The dominant theme that emerged for the present was the interaction between metal and wood in an overbearing and imbalanced relationship,” Stevens says.

In a departure from her usual process, Stevens created the movement in Anthropocene in collaboration with her eight-person cast, conducting extended improvisations (which she filmed, then recreated and shaped), to organically discover structures, meaning and relationships. The diverse cast includes dancers of different races, genders and physical abilities. Though Stevens didn’t begin this project with the intention of using her dancer’s identities, “the work developed in a way that responded to the facts of these bodies,” she says, acknowledging that these identities and their histories are inseparable from the story of this place.

Stevens endeavors both to portray injustices and enact a hope for the future through balance and cooperation. “What could the elements of the region, where indigenous people lived for tens of thousands of years before White Europeans altered it, teach us about what we need to redeem our future?”

Record of the Anthropocene Movement runs March 16–19 at Taproot Theatre.