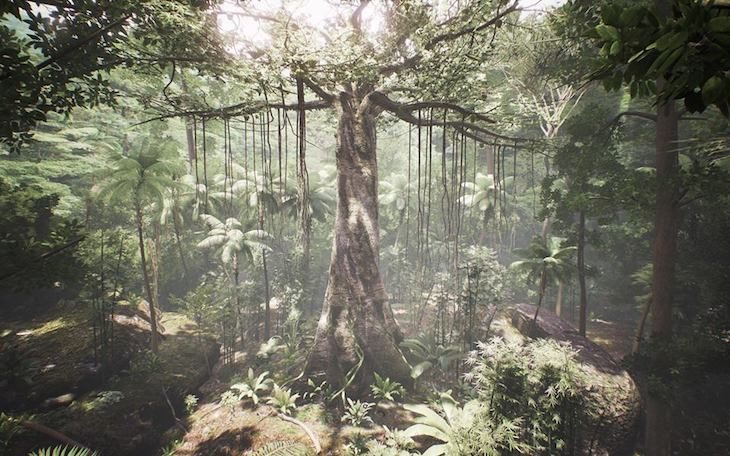 A still from 'Tree,' a VR experience by New Reality Co.

“I dream about trees on a different level now,” Sandy Cioffi says. “You come out of the soil. You smell the smells of the earth…”

We’re deep in the belly of Pacific Science Center, in a place that looks like a chic bar from the 1970s collided with the future—dimly lit, the floor piled with shag rugs. Patrons perch on barstools and gaze off into private adventures contained within the scope of VR headsets. Some artists-in-residence are hunched over laptops, lost in design software. At the center of this groovy milieu is Cioffi, a former documentary filmmaker and one of the masterminds behind the Creative Exchange Lab Pilot.

“We wanted to create an environment where there’s a respect for creating both informal and formal intersections of art and tech,” she says, “where there’s a real push not only toward questions about equity, but about what that means in terms of actual creation and content.”

The Lab is an incubator project conceived by fearless360°, the startup cofounded in 2016 by Cioffi and Gretchen Burger, who’s also an artist, educator and documentary filmmaker. Frustrated by the expense and limited reach of traditional documentary filmmaking and inspired by the potential of immersive digital media, the two set out to explore storytelling alternatives. Since its inception, fearless360° has partnered with groups such as Arts Corps, Reel Grrls, NFFTY, Shelf Life Community Story Project and Yesler Terrace. During July and August their Creative Exchange Lab Pilot set up shop in Pacific Science Center to extend its programs to the public and bring international artists to develop new work.

“It’s a radical view—that content would drive technology,” Cioffi says. “It’s at odds with this very strange, usually American art-world notion of asking for tools and toys instead of taking parameters then smashing them, determining what form the new thing should take.”

“We want to create experiences meant to wake us up to the connections between information, story, spectacle, imagination,” Cioffi says.

A centerpiece of this high-tech arcade is Life of Us, an immersive group experience where visitors plug into a chain of evolutionary life cycles, embodying creatures that morph and interact in a variety of ever-shifting environments: soaring, falling, swimming, floating. Larger conceptual spectacles plunge the viewer into states of otherness. Library of Ourselves, created by BeAnotherLab, an artist/technologist collective visiting from Barcelona with funding from 4Culture, designs experiences that place viewers in someone else’s skin while listening to their life story. In some, a viewer virtually swaps bodies with people of other genders, race and abilities; the story offered at the Lab puts the viewer in the body of a transgender Dutch artist.

One such document screened at the Lab is a VR recording of the Central District’s Red Apple supermarket, filmed two weeks before it was razed to make way for a new high-rise. The video features jazz musician Gary Hammond, who pushes his cart through the aisles as patrons relate their after-school Red Apple rituals and other memories about the role of the store in their collective life. In the coming months, it will focus on expanding the Story Brick Road project to build on the growing archive of community-owned and generated data while continuing conversations with potential partners.

There’s nothing virtual about the reality fearless360° is pushing into the world.