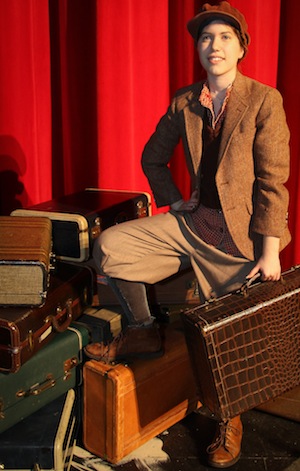 Today’s stage mothers exist in our collective conscious as the Kate Gosselin-haired tyrants of Toddlers & Tiaras and Dance Moms, but these backseat career drivers are amateurs compared to Momma Rose.

Inspired by the memoirs of burlesque icon and Seattle native, (and Rose’s daughter) Gypsy Rose Lee, Gypsy is a 1959 fable of the last days of vaudeville from the golden age of musical theatre. With a book by Arthur Laurents, music by Jule Styne and lyrics by Stephen Sondheim, the show looks with a gimlet eye on the time one could quite literally put an act together and take it on the road, and the production currently running at Seattle Musical Theatre has all the exuberant energy of an overcrowded dressing room, but also the attendant chaos.

Rose is living with her daughters Baby June and Louise in Seattle, and not even the drab home they share with her father can dull her determination to make them stars on the vaudeville circuit. Well, June will be a star, anyway. Louise is along for the ride, relegated to playing a boy in their act.

So, it’s Baby June (an appropriately throttle-able Victoria Alkin) who chirps and high-kicks center stage in their lousy act, while sweet, shy, young Louise (Monique Preston) plods along in the background for years—no one knows exactly how many, because these children aren’t allowed to age. Bad for business, and all.

With the help of Herbie (Jeff Spaulding), a kind-hearted former talent agent who is charmed by Rose after he spots her outside a theatre (“like a pioneer woman without a frontier”) this troupe cuts a swath across Depression-era America.

But babies can’t stay babies forever. After their years together, Dainty June (a completely engaging Erika Zabelle) and Louise (Suzanne Merhej) have ended up as estranged sisters, but when they come together for that ode to wishful thinking, “If Momma Was Married,” it’s one of the highlights of the show.

After June finally flies the childhood coop, Momma’s pours her formidable energies into making Louise a star that she is decidedly unqualified to be. As the act flails and the death rattle of vaudeville sounds, the group accidentally ends up booked into a Burlesque house.

Louise learns an important lesson in the crowd-pleasing Burlesque tribute, “You Gotta Get A Gimmick,” (led by Christine Rippii in a towering and hysterical turn as jaded stripper Tessie Tura) but when she ends up filling in for a stripper, Merhej begins to display some of the steely determination that is Rose’s stock in trade, and will ultimately transform Louise into Gypsy. Whether it was in her all along, or the years of being simultaneously smothered and overlooked poured it into her we’ll never know. As she makes her transformation to the star of this show, she’s ready for it in a way not even she realized.

Under the able (if fairly standard) direction of Jeff Church, this production does its job. The notes are hit, the choreography is executed, but there’s a certain amount of slack throughout the evening that sometimes keeps jokes and moments from landing.

(It’s an unfair pitfall that Gypsy is plagued by the need for lot of kids on stage and actors doubling roles, which almost inevitably creates the sense of settling into a pricey high school production.)

As Rose, Vanessa Miller is perfectly pleasant—she’s certainly got the voice for the role, and she’s got an infectious smile that Rose would have put to very good use—but the problem is that Momma Rose doesn’t really deal in pleasant. Simply put, this Rose feels a little too honestly likeable. She doesn’t manipulate, she doesn’t bulldoze—sure, she often gets her kids ahead, talent or no, but when these bookings keep coming it’s hard to understand why.

When Rose isn’t a force of nature, the emotional force of Gypsy dims like a fading footlight, especially when the questions of her final, show-and-heart-stopping “Rose’s Turn” come fast, furious and out of left field. “Why did I do it? What did it get me?”

Answers to these questions aren’t forthcoming, nor do they need to be. The vaulting ambition that landed Rose alone on the sad, desperate stage is apparent, most especially to Louise. After all, who would better understand a woman who just wants—and has only always wanted—to be noticed?

Gypsy runs through May 19 at Seattle Musical Theatre at Magnuson Park. Photo by Jenni El Fattal.