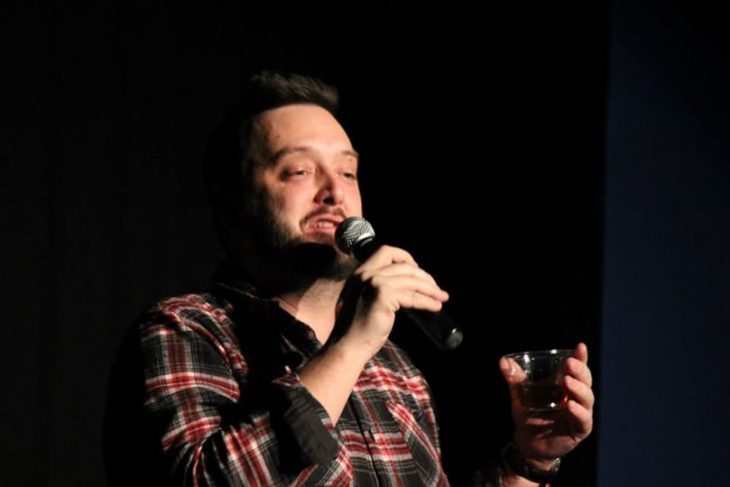 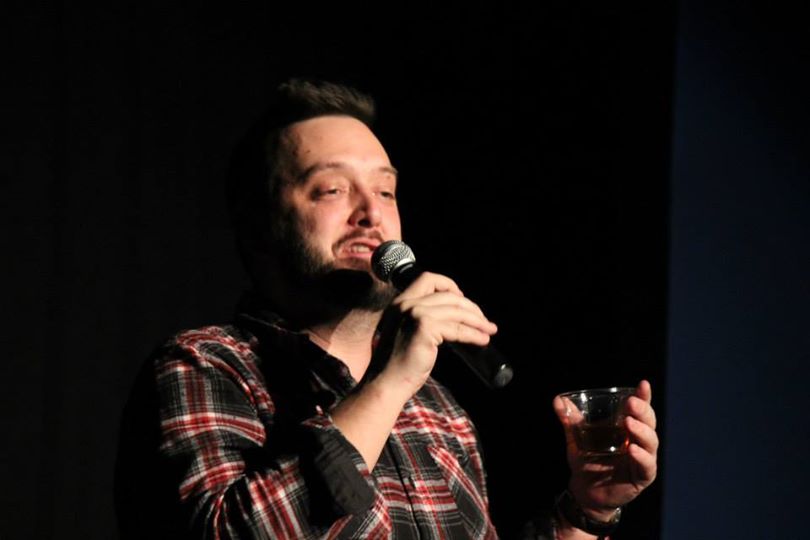 Doing these Exit Interviews with comics leaving Seattle to pursue careers in New York and Los Angeles gets depressing. It’s not only because of all the talented people our little second-tier city is forever shedding and the institutional memory that goes along with them; you start to feel like one of the left-behind, a character in a rearview mirror.

In one six-month period I lost five of my best friends to big cities. Of those, less than half still do comedy. The Exit Interview is just part of the story. When these comics leave, they join the faceless mass of aspirants gambling with their lives on Being Seen and Making It Big, and the odds are vanishingly slim. Many become cautionary tales, roadkill on the path to success. One comic I Exit Interviewed was back in town within a month. So where are the stories of those who crashed and burned?

I decided to conduct a Re-Entry Interview and found the perfect subject: Geoff Brousseau. He’s one of the funniest, kindest people I know. He’s hard-wired for brutal honesty, with pitch-perfect timing and a sad-sack look that makes you want to root for him no matter how twisted the story he’s telling onstage or how dark the demons he’s struggling with offstage. Audiences love him and so do I.

Brousseau moved down to LA five years ago and flamed out hard, fast and completely. He’s still picking up the pieces. He’s been back in Seattle for a year now, and he’s gradually reemerged on shows and open mics around town. This month he’ll compete for the fourth time in the Seattle International Comedy Competition. We talked on the patio of the Comedy Underground about his experience.

Why did you move to LA?
I had showcased three times in LA and was doing things for a guy who ran the Hollywood Improv and worked with Just for Laughs. I reached a point in Seattle where I’d headlined every room. I wasn’t gonna do any better or worse in Seattle, and I got a little bored. By the 22nd time I’d done Tulalip Casino, I thought, “Maybe there are some other things I can do.” 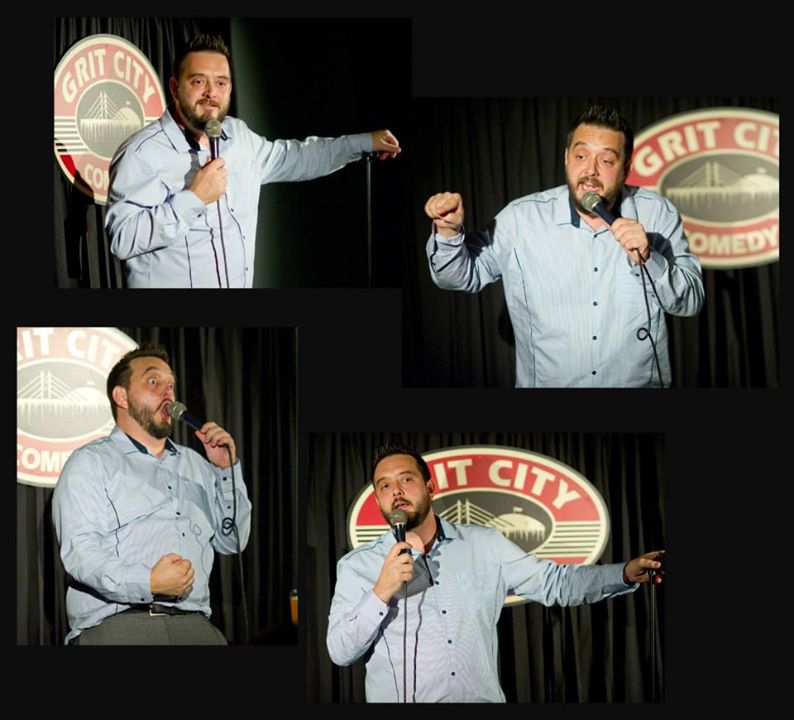 You had actual prospects. How long were you down there before the wheels started coming off?
The first two months I was there I went up at the Improv about 12 times. The very first night I went up, Vince Vaughn and Christina Ricci were in the audience. I was like, “I’ve arrived.”

I went down there with my fiancé and she stopped wanting to go to shows with me. We got into an argument right before Halloween, and then about two weeks later I was watching TV and I got a notification that I was no longer engaged to her. She was in the other room and had changed it on Facebook from “engaged” to “in a relationship.” So I knew things were not going so hot. We tried to make it work and that’s all I did for a while. I just lost interest in standup.

You did get a great joke out of moving to LA.
[Quoting his joke] We went to LA to pursue our dreams. Mine was to make it in Hollywood, and apparently hers was to move back up here and live with a plumber in Renton. And her dream has come true.

As this is deteriorating, you’re in LA, where a positive attitude can get you a long way, and you’re becoming a pretty bleak dude.
It’s a cult of personality. Don’t complain, work and be the vision of yourself that you want people to believe. Look like you’re successful, act like you’re successful and you’ll be successful. I was trying desperately hard to be that guy, but at this point I’m not that guy. It felt hollow. We finally separated and I got my own place. That’s when I became a character in a Bukowski book.

I was at this pool party. It’s what you dream your life’s gonna be like when you move to LA. There’s a pool and a hot tub, and everybody there was “blowing up”—every young comic who was doing anything in LA was there. It felt like an Entourage party. So we’re all sitting around in a circle and they’re all talking about what they’re up to. Like, “I just did Conan!” Someone says, “What’s going on with you, Geoff?” And I say, “My grandmother died and I didn’t have enough money to see her before she died. She was hugely important to me, and I didn’t even get to say goodbye to her.”

Then there was 30 seconds of silence, at which point I started laughing hysterically. I thought it was funny—a nice counterpoint to everyone’s awesome stories. But everybody got incredibly uncomfortable and slowly started to move away from me and no one talked to me for the rest of the party because I was the downer.

Was that around “bottom time?”
Oh, I had lots of bottom left.

At some point you had to decide, “This isn’t working. I can’t be here anymore.”
That part of my life, I feel like I had failed gigantically. The last two years I was in LA I went up maybe once a month. I didn’t want to be a comic anymore. Didn’t enjoy it. Every time I was onstage I riffed, I didn’t do material at all. Just really self-deprecating shit, which is not popular in LA. They don’t want you to go up and talk about how badly things are going. Comics liked it, but it didn’t help me.

I didn’t want to go home, because I didn’t want to fail at the only other thing I had to accomplish down there. I was in this whirlpool of shit where I wasn’t going to be successful, but I didn’t want to leave because maybe I could turn it around and get back this fire that I lost.

My life at that point was Bukowski-esque. One of my best friends sent me a picture of them steam-cleaning his couch because I had peed on it and bailed. His roommates were super pissed, but he said, “Don’t worry, I took care of it! And fuck them because they can’t party!” He was trying to be supportive, but I kept doing things that made me feel worse.

When I left, I had burned so many bridges. I got signed to a record deal, someone wanted to represent me and I had all this stuff and I just blew it off. I never made the album, never did one thing they asked me to do. I blew off gigs.

There was this stink of desperation and failure on me that I couldn’t wash off. I was broke, getting payday loans. Just a huge, bad cliche. I didn’t want to feel the stress of this impending doom that is LA, of seeing everyone around you do well. Why not me?

It’s the contrast that makes it so brutal, right? If your life is shitty up here, it’s not like people you know are getting on Conan.
In the last year I was there, five of my friends were on Conan. One of my friends got on as a writer on SNL, another one on Letterman. Three of my friends got Comedy Central Presents specials. And I got so drunk one night I talked to a fucking basketball about whether I should kill myself. And we decided, the basketball and I, that no, you have kids, let’s figure this out. I had two nervous breakdowns. I was an emotional wreck.

What did it feel like coming back to Seattle?
I had crippling social anxiety when I got back, from being so insular and isolating myself. I couldn’t talk to people. I would drink to try to get to a point where I could look at people and not trash myself as the first part of our conversation.

You’ve been back for a year now, so you don’t feel the need to lead with “I failed in LA” anymore?
It took six months. That first night I saw you at Jai Thai, I couldn’t talk to people. I felt shaky and wanted to leave. I don’t know anybody, I don’t feel funny, and now I have to go prove myself to all these people I don’t know. Then you showed up and talked to me and I felt 100% better. I just needed to see somebody I knew. Then Kermet showed up, all these people who were happy to see me, and it meant the world to me.

That was the night we figured out that you weren’t the young black man I’d been Snapchatting with!
Yeah!

You seem to be better now.
I just needed to get out of that cycle. I don’t want to drink like that anymore. I’m more comfortable in my own skin now. You can’t hold on to stuff forever.

LA did not help the whole situation.
I was 60 pounds lighter and I hiked all the time, but it doesn’t make you feel better. You’re in this competition you can’t win. Everyone’s trying to be perfect and it gets to be stifling. It stops being about your creative process and you start worrying about stuff that doesn’t matter. You’re worried about how you look, how your hair is, what kind of pants you’re wearing. That doesn’t matter here.

Once in LA I went to see Lewis Black. My roommate knew his manager so we got free tickets. This is at the Disney Theatre, probably the nicest theater in the United States. We went to the afterparty and it was a big deal. They had free wine, which was a huge mistake on their part. If it’s free, I’m gonna pound it. The dudes from Big Bang Theory were there. There were all these agents from APA, and they’d ask me “You do standup?” and I’d say, “What the fuck do you guys know? You’re a bunch of soulless suits ruining comedy. You guys don’t know what’s funny!”

I keep referring them as “soulless suits” and they’re laughing so I think I’m just awesome. We’re all having a good time! By this point I’m Happy Geoff but I’m also No Inhibitions Geoff. So I meet Lewis Black, and I have my arm around his neck talking to him, just swearing every other word.

Eventually we’re the last people there. We go home, and my roommate’s fucking pissed. He says, “Dude, you can’t talk to agents in LA like that, man! You can’t tell ‘em they’re soulless suits!” I go, “We were having a good time!”

The next day he comes back and says, “I ran into Lewis Black’s manager, and she told me to pass along a message from Lewis to you that anytime he’s ever in town and you’re available, he’ll comp your tickets. She said, ‘He loves your roommate. That’s his kind of guy, and he was so happy that he got a break from the Hollywood party to have somebody that he actually enjoyed spending time with.’”

The next day four people from the APA friended me on Facebook. I was like, ”Fuck you, LA! I know what I’m doing!”