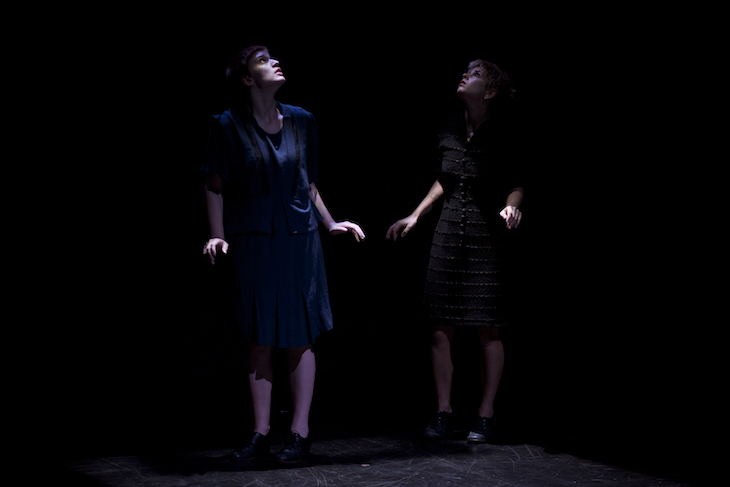 Twenty-five years ago, Dayna Hanson met Gaelen Hanson (no relation) and a partnership was born. The two choreographers’ instant kinship fueled a dozen years of acclaimed work with their Seattle-based company, 33 Fainting Spells. Between 1994 and 2006, 33 Fainting Spells was incredibly prolific, producing six evening-length works of dance theater. Due to the ephemeral nature of performance, much of this influential work has been lost to memory and unavailable to new generations of dance enthusiasts in Seattle. Dayna Hanson’s project RE/33: 33 Fainting Spells Revisited brings these works into the present through archival digitization, community conversations, dancer workshops and reconstruction for the stage. Last weekend, Installment One focused on the 33 Fainting Spell work that started it all: The Uninvited.

Julia Sloane and Madison Haines are already performing as the audience enter Base: Experimental Arts. Sloane, managing a constant drip of water from the ceiling, holds out a glass to catch the leak. Haines, meanwhile, sits across the space, trying in vain to get Sloane’s attention by presenting objects from a leather bag. She pulls out a red doily and unfolds it in Sloane’s direction. When that doesn’t work she tosses a handful of colorful pompoms in the air and takes a flash photo with a disposable camera. Haines’ exaggerated, almost clownish quality contrasts with Sloane’s serious focus and sets up the interpersonal negotiation of that unfold over the half-hour.

In tailored shirt dresses and chunky oxford heels, the two characters attend to task-based action, although the tasks are far from pedestrian. Haines unties her shoes with deliberate preciousness, then twists the laces up into a circling motion that consumes her body. Sloane interrupts her rhythmic motions to re-tie Haines’ shoes. Then Haines balances precariously on the edges of an old metal washtub. Aided by dramatic boxes of light and gradually intensifying classical music, the work’s magnified attention to task takes on a silent film quality as the two dancers’ activities begin to overlap. Rhythmically complex unison dance phrases—stomp, jump, fall, leg shimmy, foot flick—alternate with coordinated ideas: one walks a chair’s legs as another walks her shoulder blades along the ground. As they spin around a table, each dancer’s interpretation of task shows their distinctive characters, Haines ornamented and malleable, Sloane directed and efficient. The duet rises to a fever pitch of sliding across the table, pounding on and ricocheting off it before ending in a breath-catching leap off the table’s tall ledge.

The Uninvited crystalized a moment in time at the very beginning of a partnership, the “distilled and focused quality of having another person in the room,” Dayna Hanson says in a post-show conversation, part of RE/33’s mission to provide historical context for the work. When the company disbanded in 2006, the work fell out of circulation and Gaelen moved to Thailand. After losing touch for seven years, they recently renewed their friendship, making way for the RE/33 project. Returning to this work a quarter-century after its creation has been an emotional process for Dayna: “The work is so ephemeral; people working in performance and dance are in eternal existential crisis.” Unearthing the work, digitizing it, acknowledging it, has eased the pain that many choreographers feel when the work has ended; in many ways it no longer exists.

To learn the choreography, Sloane and Haines referenced grainy VHS recording, but much of the reconstruction came straight from Hanson’s memory. “To have the history in her body in the room with us made a huge difference,” says Sloane, who performed Dayna Hanson’s role. Even though Gaelen Hanson isn’t actively part of the reconstruction, Haines used a recorded interview to learn about her character, remarking that even the quality and rhythm of Hanson’s speech gave her information about how to approach her character. It’s a testament to how much of the artist, and the relationship, becomes preserved in the art.

RE/33 is not only a window into the time in which these dance works were made, but also a chance to reflect on our contemporary aesthetics. Watching The Uninvited made me keenly aware of how influential the hyper-articulate noodling of Gaga has been, as well as the current prominence of hip-hop and street dance styles in contemporary concert dance. Even the sub-genre of dance theater, which is how 33 Fainting Spells identified, has tended toward a messier, more cross-disciplinary aesthetic in recent years. By comparison, The Uninvited feels stripped back and utilitarian. As the RE/33 project continues reprising repertoire from the late ‘90s and early 2000s, it will illustrate the evolution of these two influential artists and the shifting aesthetics that led to our current cultural period.