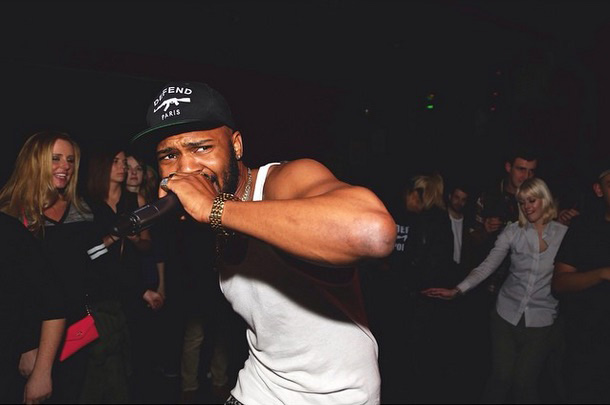 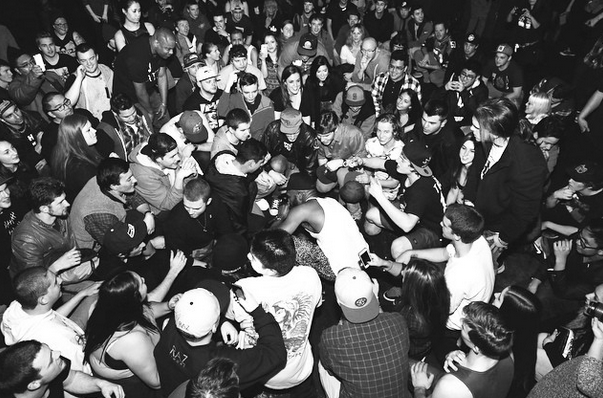 Two hours before his set at Neumos this past Thursday, Raz Simone hung out by his merch table, doling out hugs and handshakes to teens in snapbacks and backpacks. The house music was low, conversation the most audible sound in the room. Simone sauntered into the crowd and announced that there’s food in the corner: strawberries, a veggie platter and slow-cooked chicken and vegetables over rice. He returned to his post and began chopping onions.

This was the release party for the rapper’s second full-length project, Cognitive Dissonance: Part 2. It’s his first headlining show in Seattle, coming after a breakout year that included a deal with digital label 300 Entertainment, the release of his debut album and an opening slot on a national tour. After a well-received set by young rapper Ryan Caraveo and two songs by Magik, an artist affiliated with Simone’s company Black Umbrella, Simone and his band—guitar, cello, keys and computer—took the stage.

As the first beat dropped, Simone leapt off the stage and waded into the crowd. Before the song ended, he sprinted upstairs to the bar and lead a call-and-response from over the balcony’s railing. The mic protested with whiney static but no one cared. This was the MO of Simone’s show: Make music in the service of human connection.

After descending the stairs, he grabbed security’s cocktail table and dragged it to the middle of the floor. He stood on the tabletop for “These Kids Throw Rocks,” the half-full room taking in his leopard-print sweats, white tank and black snapback, his band toiling away unperturbed. Back on land for the start of “Still Mobbin,” he instructed the crowd to thin out, stranding himself in the floor’s center, his features warmed by the house lights’ red glow. Alone in space, he swung a gold chain above his head. His rapping was tight and present. As the song continued, he made his way to edge of the circle and began pulling people inward. Soon he was engulfed, the collapsed crowd burying him, jumping on beat and joining in the hook: “Still mobbin’, fuck what a hater’s got to say/We worked too hard, gone too far, to let ya’ll motherfuckers in the way.” It was a moment.

Feats of crowd control continued: Simone jumped back-first into the crowd on the aggressive “Thirsty,” somehow still rapping as he surfed and then transitioned back to the stage; he moved the crowd of hip high school and college students as if they were an enthusiastic youth group; he shouted out fans by name and Instagram handles. Like Jesus with two loaves and five fish, Simone broke himself apart and handed pieces of himself to the crowd from a self-replenishing supply.

His band played the visual counterweight to Simone’s exhaustive activity. Symmetrically positioned on stage, they sang backup and added tasteful flourishes to already full beats. When they announced themselves most forcefully, they brought order, not chaos, and never overpowered Simone’s vocal. The new lead guitar riff on “Natural Resources” in particular imbued the song with a brighter hue.

Lachow exited and more than an hour into the show Simone introduced his new music. Each new song extended the different directions of his debut, the choruses a little stickier and the bangers a little harder. From the caustic trap of “Let It Go” to the two-step soul of “Why Aren’t You Mine,” he fleshed out his worldview and displayed a refined versatility.

After more than two hours, Simone finished with new closer “The Lights.” As the music faded, Simone asked, “Is anyone hungry? I’m going to Charlie’s on Broadway.”