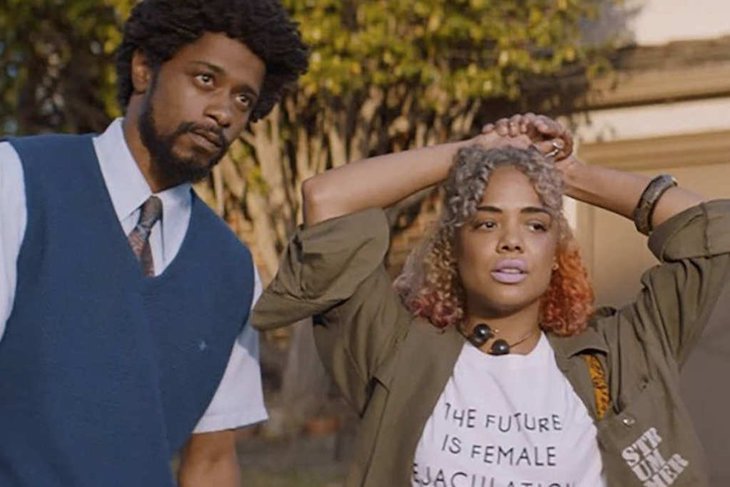 Sorry to Bother You transposes the late-capitalist logic of the video game to the movie screen. This is a film that has levels: A protagonist motivated by a vague mission makes his way through successive tiers of achievement, unlocking access to resources and prestige that were previously unavailable. Its trajectory should be familiar to any Millennial who grew up playing Super Mario or Sonic the Hedgehog.

Those video games celebrated the uphill climb. Mario earned the affection of Princess Peach; Sonic amassed thousands of gold rings while thwarting Dr. Eggman’s plans for world conquest. But Nintendo never depicted the conflicted inner monologue of Mario and Luigi, Italian Americans who left their working-class immigrant communities to risk their lives for a distant socioeconomic elite’s damsel in distress. In Sorry to Bother You, writer-director Boots Riley problematizes the upward mobility of the male hero protagonist. With every step Cassius Green (played by Lakeith Stanfield) takes up the corporate ladder, he strays further from self-acceptance, domestic happiness and solidarity with his coworkers. In this video game storyline, the longer one plays with capitalism, the more one loses.

The villain in Sorry to Bother You is the union-busting management of a corporation that tries to sabotage its workers when they collectively bargain. Though a wacky race of horse-humans thwart the police state’s violent crackdown on worker unrest, the true heroes of Sorry to Bother You are the labor organizers who ultimately present Cassius, and by extension all of capitalism, with an ultimatum: Surrender your participation in a social order built on exploitation and racism, or else surrender everything. Rather than present this anti-capitalist errand as a bore (à la Brecht), Sorry to Bother You is a dramatic jamboree of offbeat jokes, jumpy edits and pop-music jams. If the art of making communist agitprop for a mass audience were a video game, Boots Riley has beaten it.

Marxist cultural critic Fredric Jameson wrote in 1991 that “the post-literacy of late capitalist [media] reflects the absence of any great collective project.” Normally Riley’s absurdist comedic devices would reinforce the meaninglessness of struggle against seeming inevitabilities like class exploitation, war, and environmental collapse. Columnist Elizabeth Bruenig captured this comedic tone in her 2017 essay “Why is Millennial Humor So Weird?”  “Rather than try to restore meaning and sense,” she wrote, “this style of humor plays with the moods and emotions of an illegible world. It’s a digital update to the absurd genres of art and literature that characterized the tumultuous early 20th century.” But Riley doesn’t deal in Sisyphean despair as ancestral absurdists like Albert Camus did. Instead Sorry to Bother You refashions the master’s tools of ironic detachment and surreal spectacle into hammers and sickles to deconstruct the capitalist plantation.

A century after the post-WWI Dadaist movement, surrealism survives. Chipper weathermen on the nightly news omit climate change while describing the latest heat wave. The richest dozen individuals in the world hold as much wealth as half of all humanity, then lecture us about the virtues of hard work. America’s favorite absurdist fiction is the bizarre fantasy that Sorry to Bother You deflates, the fairytale that we can find meaningful self-expression in being exploited for our labor. For a select few individuals who operate in creative or technical fields that reflect their innermost passions, work is part of the American dream. For Cassius Green and the majority of capitalism’s subjects, work is a necessary nightmare.

How long until we can be woke? In 1930, economist John Maynard Keynes predicted that Americans would achieve a 15-hour workweek by the year 2000. In the Keynesian vision, the combination of ever-escalating productivity and profits, the automation of the workforce, and progressive taxes that fund social entitlements would create a social order where citizens like Cassius Green wouldn’t have to slave away for subsistence.

Obviously, this post-materialist fantasy never materialized. As David Graeber outlines in his searing 2018 book Bullshit Jobs, the last century has seen an explosion in clerical, managerial, tech and sales work. Traditional productive labor in the manufacturing and industrial spheres has, as Keynes predicted, been automated. For workers like the Millennial POC cast of Sorry to Bother You, white-collar, paper-pushing managerial posts have replaced the menial jobs of yesteryear. David Graeber calls bullshit:

“If someone designed a work regime suited to maintaining the power of finance capital, it’s hard to see how they could have done a better job,” Graeber writes. “Productive workers are relentlessly exploited. The rest are divided between a terrorized stratum of the unemployed and a larger stratum that are basically paid to do nothing, in positions designed to make them identify with the perspectives and sensibilities of the ruling class (managers, administrators, etc).”

To Graeber, capitalism subsidizes its own reproduction by tying individual workers—and society at large—to the notion that working to make someone else rich is the chief guarantor of social currency and personal prosperity. Sorry to Bother You shows labor struggle as an antidote to the everyday exploitation of the workplace, but Graeber goes a step further, questioning why Americans need to work hard at all. In an appearance on the Chicago WNUR 89.3FM radio program This Is Hell!, he advances the idea of a universal basic income, or UBI, a no-strings-attached stipend paid to all citizens by the government.

On the face of it, UBI cuts against America’s deep-seated puritanical grain, particularly in the present neoliberal terrarium, which celebrates survival of the fittest and stigmatizes handouts. But UBI isn’t as fringe as it seems. Both Richard Nixon and Dr. Martin Luther King Jr. supported it, as did Hillary Clinton in her 2017 election post-mortem What Happened. Barack Obama recently plugged it in a speech on economic justice in South Africa. In 2017, an Oakland startup launched a UBI experiment by giving 3,000 residents $1,000 over five years and currently Chicago’s City Council is considering a similar plan. And in March 2018, UBI was adopted into the official platform of the statewide California Democratic Party, meaning that any politician seeking the party’s endorsement in the nation’s most populous state must agree that all Americans deserve money for being alive.

In 1971, the U.S. House of Representatives passed a federal UBI proposal that later died in the Senate. That same year, Seattle was one of four cities selected by the federal government to partake in “Income Maintenance Experiments.” Between 1971 and 1982, 4,800 Seattle families were given the inflation-adjusted equivalent of $23,000-$34,000 per year. Then as now, opponents of UBI feared it would encourage laziness. But a study on Seattle’s UBI pilot showed only a marginal workforce decline, most of it among young people suffering the recessions of the ‘70s and new mothers who could afford to leave the workforce to raise children.

As with most American social reforms (see the ironic history of affirmative action), the country’s most privileged would likely be the first to fight UBI—and also the first to cash in on its implementation. Well-to-do whites raising families in affluent neighborhoods may bristle at the idea of giving weed-smoking slum-dwellers like Cassius money for nothing but would themselves benefit from an additional layer of economic security that would keep parents from working full-time jobs at a critical stage of family development. Allowing comfy citizens to become the political focus of UBI may be a useful political expedient for garnering popular support for it. All the same, UBI’s chief impact wouldn’t be on the comfortable but the disprivileged.

Along with public investments in schools and healthcare, UBI would present an opportunity for government to behave as more than just another high-priced vendor in the marketplace of goods and services that people require to stay alive. Capitalism—a system that supposedly thrives on competition—would be forced to compete materially and ideologically with a democracy that ensures citizens don’t have to take banal jobs to afford the basics. With so much meaningless work being done in the name of “productivity” and “company loyalty,” there’s a good chance capitalism would not survive the challenge. Just as study after study after study ties depression, chronic pain syndromes and overall negative health outcomes to workplace toxicity, UBI has been shown to increase health outcomes, decrease crime rates and improve overall happiness.

Tying the pursuit of happiness to hard labor intensifies capitalism’s link between one’s ability to sell their labor and their worth as a human being. If it weren’t for capitalism, we wouldn’t have the masterpiece that is Sorry to Bother You. But wouldn’t you rather have free money instead?